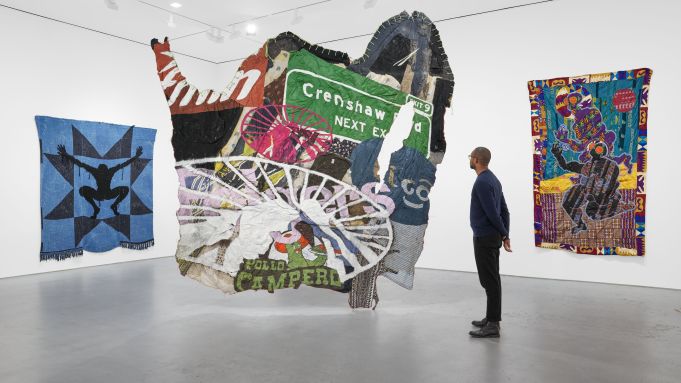 “This is a really important turning point for textile work, for weaving work, for quilting work,” says Legacy Russell. “Where those things intersect and where they remain distinct rattles at assumptions about art versus craft.”

Russell curated “The New Bend,” a new group exhibition on view at Hauser & Wirth, which pays homage to the intergenerational legacy of Gee’s Bend quilters. The show highlights the impact of Gee’s Bend on contemporary art and centers the Alabama community of African-American quilters as a prominent force in art history.

“The women of Gee’s Bend have established a monumental canon of thought and practice that is determined and has persisted over time. It’s an ongoing unfolding history, and a living history,” Russell says.

“The New Bend” marks the 12th anniversary of The Whitney’s monumental “The Quilts of Gee’s Bend” exhibition, overseen by curator Raina Lampkins-Fielder. Russell, the executive director for The Kitchen and formerly an associate curator for the Studio Museum in Harlem, charts her curatorial framework for the exhibition several years back, long before it began taking shape at Hauser & Wirth last year. She approaches the show with a “chaptered” mind-set: the exhibition isn’t the entire story but an additional entry into thinking about the impact of Gee’s Bend on different generations of artists and modes of practice.

The show features work by 12 artists at various stages of their career. Artists include Diedrick Brackens, who won The Studio Museum in Harlem’s prestigious Wein Prize in 2018 for his woven works; Dawn Williams Boyd, who’s approached fabric as paint for several decades, and Tomashi Jackson, whose work was included in the 2019 Whitney Biennial. The youngest artist was born in the mid-’90s, the oldest in the early ’50s.

“If there was a connective thread across all of the artists participating, it’s that there is no singular viewpoint for what a diasporic lived experience looks like,” Russell says.

The exhibition makes a case for the duality of the individual experience in context of community. “Textile work is collective work,” she says, adding that the legacy of Gee’s Bend pushes against the idea of a singular artist siloed inside of their own studio practice, and instead makes a case that “genius can be collaborative,” Russell adds. “No two Gee’s Bender quilts are the same. There are incredibly distinct practices that live inside of the umbrella of what Gee’s Bend is.”

That duality is prevalent in the exhibition. Ideas are reflected throughout the gallery across different artists and approaches to material, connections that become apparent through the configuration of the work in the gallery space. Zadie Xa, a Canadian artist living in London, blends Korean shamanism with a Gee’s Bend-influenced aesthetic into sewn works; New York-based Qualeasha Wood incorporates digital imagery into her analog tapestries. Some of the resonance between works — such as the top outline of Eddie Rodolfo Aparicio’s multimedia collage, which is mirrored in the figure within Bracken’s weaving — is uncanny.

The physical installation highlights the inherent painterly and sculptural qualities of the art. Eric N. Mack’s work, composed of panels of fabrics stitched together, quite literally extends off the gallery walls. The pieces sway and interact with nearby works and viewers as they move around the space.

“So often we are taught that art exists on the wall, and breaking from [that expectation] feels like a misbehavior,” Russell adds. “The works are not intended to be static. They participate and are empowered as they hold position in the room. Whether the artist is present or not…you can feel those histories and those voices and visions in the room.”

The original Gee’s Bend quilts, although functional, were crafted with impressive artistry. The quilts subvert assumptions of what gets categorized as “fine art,” and who gets to be considered an artist. They also contain multiple functionalities: as domestic items, as artworks, and as works of political activism. The work on view at Hauser & Wirth challenges assumptions toward textile-based work, which has historically been confined by gendered, classed and raced narratives.

“These histories have created complex divisions between what is and is not art,” Russell says. “In many ways, there is within this exhibition a reparative challenge to think through and confront some of the problems and troubles inside of art history: how these stories are told and who gets to tell them,” she says. “And making sure that we’re centering and highlighting those who have been important contributors across the way.”

For Russell, the term “New Bend” is as undefinable as a singular Gee’s Bend artist, and she intends to let that term remain broad.