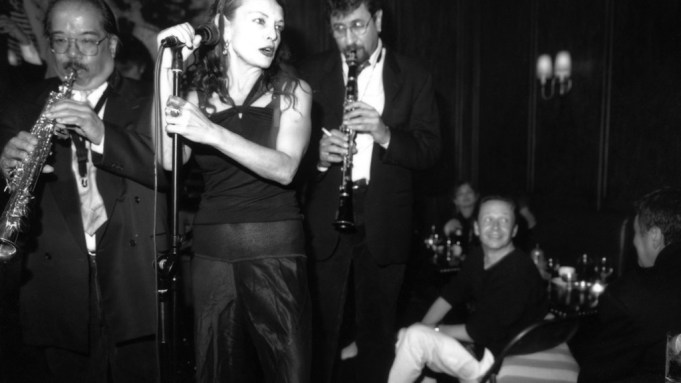 Over the holidays Michèle Lamy, the enigmatic wife of designer Rick Owens, quietly announced to friends that she would be reopening her fabled restaurant Les Deux Café, this time in Venice, as part of an artistic compound that will be serving up more than just food.

“It’s a huge old glass factory with a canal on one side and the lagoon on the other,” said Lamy. “Rick calls it Lamyland,” she laughed. The duo had been spending time in Venice over the past few years, the city being only an hour flight from their Paris home base, when she stumbled upon the nearly 100,000-square-foot raw space. The multiple buildings and accompanying outdoor area will in her hands become a foundry, ateliers for stone and wood artisans, art studios, a gallery, a foundation to support artists in residence (including her daughter, the multimedia and performance artist Scarlett Rouge), as well as the aforementioned eatery.

“The restaurant will come first because it will be the heart,” said Lamy. What the compound won’t have is a Rick Owens shop, though she expects that he will utilize it to show his furniture designs. “It will be a flexible space and an occasion to put together all the people I love and admire,” Lamy said.

It is a large project with plans for a soft launch of the restaurant during La Biennale di Venezia in June, but Lamy knows all about creating her own little world, starting with the first Les Deux Café in Los Angeles. Wildly popular in the early Aughts, the original café was a two-story craftsman bungalow that reportedly once belonged to James Cagney. Lamy had it moved several blocks to rest in the back of a seedy parking lot just south of Hollywood Boulevard and hired Paul Fortune (of Sunset Tower fame) to design with her the old-school mahogany interiors, a Provencial-style covered veranda and a walled garden dripping in wisteria.

In its heyday any given night could find Madonna and costume designer Arianne Phillips at one table, Lenny Kravitz, Sofia Coppola, Slash or Tim Burton at another. Sean Combs, still in his “Puffy” days, held court alongside Tom Ford and L’Wren Scott, while tattoo artists and drag queens smoked cigarettes in the garden and Gore Vidal sat quietly by the outdoor fireplace. It was the perfect mix of A-list and merry misfits, and there was never not a line to get in.

Seventh House and then Presse Public Relations had offices on the second floor and represented Owens, the jeweler Lorraine Schwartz and even hosted one of Natalie Massenet’s first Net-a-porter press previews on the veranda. All the while, Lamy and Owens lived across the street in a series of converted storefronts that housed his design studio and showroom, a makeshift kitchenette and their macabre bedroom covered from floor to ceiling in dark gray wool.

Les Deux Café was as much salon as restaurant and died a not-so-slow death once Lamy relocated to her native France with Owens, who had been hired by Revillon to design furs and wanted to expand his own collection. In the years since, The Dolce Group engineered a short-lived comeback at the same spot, and Lamy herself hosted a one-night affair in Paris under the same name back in 2009. This time around the restaurant will be just one part of the whole. On Lamy’s Facebook page, where she is seeking referrals for “a chef, a very charming one who likes boats,” friends are excited.