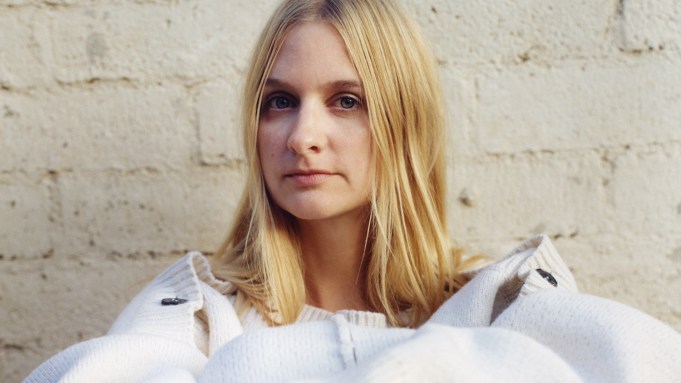 Lesley Vance’s new paintings, now on exhibit at David Kordansky Gallery, are all about speed.

“With this body of painting, I’ve been thinking a lot about pace and speed. Some things moving fast, and some things that are moving slow,” the L.A.-based abstract artist explains of her 12 latest works. “I think because the original gesture from where [the painting] starts is very fast, there’s a lot of speed in them,” she continues. “They start in this kind of chaotic speedy way, and then within the painting it gets slower and slower each stage of the painting.”

Whether she’s building a painting from an exploration of gesture and speed, or a concrete object, Vance describes herself as a process-based artist. “I never know what I’m going to do when I start a painting. I’m not someone who has an abstract vision in my head and then I put that down,” she says. “I’m not really thinking about anything I’m doing, I’m just sort of waiting for something to happen that inspires me or excites me, that I think I want to exist, that I think is a good beginning to a painting. You have to pay enough attention where you realize that something good is happening, but not too much attention that you’re forcing something to happen. Then the painting builds itself that way.”

Vance offers no simple literary clues into her work; each painting is “Untitled.” “I’d rather it be kind of an open-ended experience of just looking at what’s happening in the painting,” she says. “Whatever I called it, someone would try to find that in the painting.”

Known for her small canvases, Vance’s latest paintings also represent a scaling-up — although at 31 by 24 inches, they are still much smaller than most contemporary paintings. “I think I wanted to move away from a certain preciousness. And also because I’ve been getting more interested in the idea of movement and different speeds happening, it just started to feel right,” Vance says of working with the larger canvas size. Although slightly larger, they retain a quality of intimacy, reflective of her approach. “I like the kind of paintings that are scaled for domestic space, like a real living space,” she says. “Something that you could see in someone’s house, not in a corporate office lobby.”

Despite the scale, her work is spaced out within the gallery, which allows the paintings to expand beyond the canvas borders and into the gallery’s white space. “It’s almost like they’re magnets, if you have two of the same charge. If you hang [the paintings] too close together, they really fight. They don’t want to be hung close together,” Vance says of the installation. “Which is the instinct with small paintings all the time — people want to hang them close together.”

The exhibit also marks a continuation of Vance’s relationship with David Kordansky. She was one of the gallery’s first artists, and her work was shown in its inaugural exhibition in 2003. “[Kordansky] is doing his own thing, he’s not paying attention to what I’m doing in here and letting it affect him, but I do feel like we’ve grown up together,” Vance offers. “There’s a feeling of we’ve done this together.”

On view at David Kordansky Gallery through July 1.