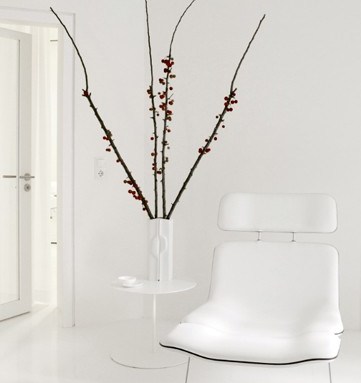 NATURAL NURTURE: A peaceful bit of the Austrian woods has come to Berlin’s trendy Hackescher Markt with the new Susanne Kaufmann day spa. A full line of facial and body treatments, including shaving services for men, massage and a private spa for couples, is offered in a pristine white environment.

This is the second location for Kaufmann, whose premier spa is in the alpine Hotel Post Bezau, a family-run resort in the Bregenzerwald region of Austria. Kaufmann’s artisanal line of more than 60 organic products, used and sold in both spas, are handmade in small batches, using plants from the region.

While Germany is home to a host of natural cosmetics companies, Kaufmann feels her line is different, thanks to its deep roots in tradition. Her grandmother used the herbs arnica and St. John’s wort in tonics and poultices — now they’ve made their way into Kaufmann’s high-end creams. The Susanne Kaufmann Spa joins Asian-influenced Yi-Spa Studio and waxing-beauty center Senzera in Berlin’s newest spa row.

A BIRD? A PLANE? A CLUB: If the club is easy to find, and has anything so obvious as a sign on the door, you can be sure it’s not the place to be. In fact, the latest of Berlin’s hip hangouts are rarely, strictly speaking, clubs at all. “It’s a bit boring if it’s straightaway obvious what we are about. Much more interesting to keep people guessing,” explained Johannes Schoen, manager of HBC Kollektiv, a rambling 16,000-square-foot art exhibition space spread over quirky rooms that double as a club, live music venue and cinema.

Opened in September in the retro East Bloc chic of the former Hungarian Cultural Center, Karl-Liebknecht-Strasse 9, the first event was originally intended as a one-time arts party in a deserted building. HBC now throws regular club nights in which partygoers run around between eccentric art installations and dance in the Hungarian Center’s old cinema auditorium. The venue will host numerous events throughout Fashion Week, including the official party for the avant-garde trade show Projekt Galerie.

Meanwhile, over in Kreuzberg, LiveAtDot, a live concert location for serious music aficionados with a restaurant upstairs, has moved into what was once the club 103, at Falckensteinstrasse 47. To check out Mitte’s glam set, head for Violet, Rosmarinstrasse 8-9, set up by the owners of Weekend. And for something a bit more underground, where the beer is cheap and the crowd relaxed, search out the tiny Spyz, tucked away on Reichenbergerstrasse 125.

APARTMENT STORE: Berlin’s concept store pioneer Andreas Murkudis has done it again. The king of Munzstrasse, where he runs his AM 1, 2 and 3 stores plus the Acne shop, has inaugurated his latest retail format. Called Etage, it’s located up some unlikely looking stairs in the front building of his Munzstrasse 21 courtyard. Etage is housed in a 2,000 square-foot, second-floor apartment. Here’s a chance to check out a typical altbau Berlin residence complete with parquet floors, French doors, ultrahigh ceilings and oodles of space. As with everything Murkudis sells, Etage is an assemblage of some of his favorite things, here set out in a creative room-by-room mix. While the emphasis is on interior design, furniture by E15, Vitra and architects Gonzalez/Haase, lamps from Serge Mouille, Flos, Wigglesworth-Weider, Nymphenburg porcelain and Lobmeyr glass share the stage with Altmann & Kühne Viennese chocolates; Rochelt fruit brandy; Montale fragrances; Johnston cashmere, and a rainbow of bias-cut dresses by his brother Kostas Murkudis. The concept is too frequently “clean house,” and Etage’s multiple rooms will be redesigned at the end of February.

Open Tuesday through Saturday, 2 to 6 p.m.