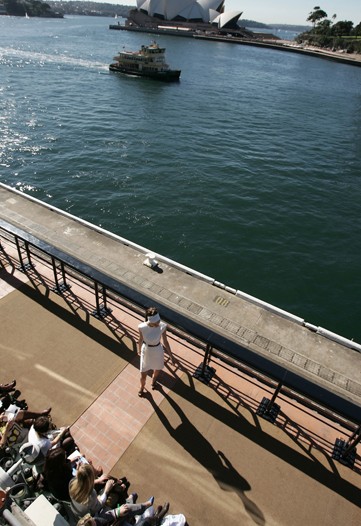 Australian historian Robert Hughes once described the British fleet’s arrival in Sydney Cove as the 18th-century equivalent of traveling to the moon.

Sydney might be oceans from the world’s more traditional fashion capitals, but thanks to jet travel, the Internet, Fox Studios, fashion week — and five famous rings — Australia’s most populous city is no longer a backwater.

Sydney is Vuitton’s top market in Australia, where the company runs eight boutiques and reported “strong” double-digit growth each of the past five years.

Major international events are not unusual here. Since 1993, Sydney has hosted the Summer Olympics, a Rugby World Cup, an Asia Pacific Economic Cooperation Summit and a World Youth Day.

It also unveiled Australian Fashion Week and the spring showcase of the biannual Fashion Exposed, the biggest apparel trade show in the Southern Hemisphere. The fair is the larger of the two Fashion Exposed events (the fall version is in Melbourne), with more than 550 exhibitors and almost 10,000 attendees last March.

“Sydney is seen as the gateway to Australia,” observed Marie Kinsella, managing director of show organizer Australian Exhibitions and Conferences.

Thanks to Fox Studios, Sydney has been the backdrop for blockbusters from “Mission: Impossible II” to “Moulin Rouge,” “The Matrix” trilogy, “Superman Returns” and “Star Wars” episodes II and III.

Sydney was also ranked as the world’s 10th most livable city by Mercer’s 2008 Worldwide Quality of Living Index, with an increasing number of Australian high-profilers residing in Sydney and commuting overseas as needed.

But while it may be among the more livable cities, it is not without its economic challenges. Many people are starting to find even basic housing out of reach. In April, the International Monetary Fund labeled Australia’s property market among the world’s most overvalued — by more than 25 percent.

Sydney is the most expensive Australian property market, according to the Australian Institute of Public Affairs, and one of the world’s costliest housing markets, with the average Sydney home at roughly eight times average household income.

Following a boom from 1999 to 2004, Sydney’s property market stalled — with small price hikes in some places, but drops of up to 30 percent in others.

“Australian families are just getting by, living life on a knife’s edge, and if we do see a widespread, sustained economic downturn, well, things just might get ugly,” noted Australian Property Monitors general manager Michael McNamara.

But an IBIS World report released before this month’s first Rosemount Sydney Fashion Festival predicts women’s and children’s wear will weather the downturn. Many hope the event, held Aug. 13 to 17, will turn out to be the catalyst for a needed retail boost.

Launched by IMG Fashion Asia Pacific, it is the latest salvo in the battle for Australian fashion bragging rights between Sydney and Melbourne. According to Global Language Monitor, the winner is Sydney.

With its media profile stretched to 38 million Australian dollars ($33 million at current exchange) in 2004 — representing a 300 percent increase from 2002, according to Media Monitors/Rehame — Australian Fashion Week irrefutably played a major role.

Bought by IMG in 2005, AFW launched at Fox Studios in May 1996 and in 2003 moved to the redeveloped, harborside Overseas Passenger Terminal on Circular Quay.

A few blocks from the harbor, in the Central Business District, Westfield Group is creating a fashion hub, a 600 million Australian dollar ($520 million) redevelopment of the Centrepoint, Skygarden and Imperial Arcade centers. It will be anchored by David Jones and Myer department stores, with 300 stores in 409,000 square feet.

When completed in 2011, Westfield Sydney City will be the jewel in the firm’s Australian fashion crown — a spot currently held by Westfield Bondi Junction.

The upscale center has 509 retailers — including Bally, Escada Sport, Hugo Boss and Chanel Beauté — and, in the first quarter of 2009, Vuitton’s ninth Australian shop will open, marking its first in an Australian mall. There also are two supermarkets, David Jones and Myer; Target; a 200-seat cinema complex, and a food court and restaurant complex boasting harbor views.

“Prior to Bondi, we were known as a regional shopping center developer, but I think Bondi really put us into a new class of development,” said Jordan. “The thinking process we went through for that put us in very good stead for whether we’re doing Westfield London or Westfield Stratford or Westfield San Francisco. Now we’re back right in the heart of Sydney.”