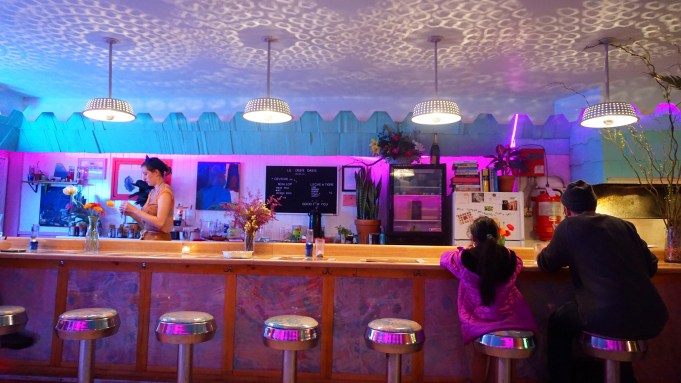 “We just picked up the chickens,” Carla Perez-Gallardo says over the phone on a recent Monday. She’s stocking up for the week with her co-chef and co-owner Hannah Black and while such an errand would be rather cumbersome in Manhattan, for Hudson, N.Y., it’s an average outing for a locally sourcing chef. Perez-Gallardo and Black, two former artists behind the Lela Rose-beloved catering business Table Table, have opened Lil’ Deb’s Oasis in the upstate town, which is giving Long Island a run for its money in buzz-factor as of late.

Perez-Gallardo and Black met by doing a Vietnamese food truck and ended up running a restaurant in Hudson by way of art school, the Deep South and the kitchen of one Ecuadorian grandmother.

Black grew up in Alabama and studied painting at RISD before making her way to Hudson. “I loved the city but kind of just wanted to live somewhere beautiful — Hudson is a nice place because there’s a lot going on, there’s a creative community, creative people from the city, there’s a direct avenue,” she says. “It’s a small town but it’s definitely culturally rich.”

Perez-Gallardo hails from Queens and went to Bard upstate to study studio art. “Cooking has always been something that I did,” she says. “My grandmother came to the U.S. as an immigrant [from Ecuador] and wound up cooking in order to support her family. I just grew up in the kitchen, and not until I graduated college, moved away, moved back and was kind of in between things did I realize it was something I actually wanted to do with my life.”

They ran a pop-up last August in the space that is now home to Lil’ Deb’s, when it was still run by the restaurant’s namesake. “It was called Debbie’s Lil’ Restaurant,” Perez-Gallardo says. “Debbie is kind of the namesake of Lil’ Deb’s oasis — she’s born and raised in Hudson and has been running her own business in the space for 22 years. We’d been catering for a while and were ready to open our own place, and very coincidentally she reached out and was like, ‘Hey girls, I’m ready to retire. Do you want to take over?’”

Though many city-folk have been flooding to the Hudson Valley, the Lil’ Deb’s team argues they are a restaurant for the community. “There are a lot of new businesses coming in, especially in the past several years, and they are knocking the old businesses down, white-washing over it, changing the name entirely and forgetting the history, and trying to be some New York City or Brooklyn outpost,” Perez-Gallardo says.

With the influx of outsiders comes a standard of pricing that, while commonplace in New York City, is ill-suited for Hudson. “A lot of the new restaurants that are coming in here are geared towards weekenders and have $30 entrees, which is nice every once and awhile but it’s not the community that is actually here,” Black says. “There’s a $10 plate [on our menu] and that was important to us.”

Appetizers — such as “deviled eggs; fried yuca with a bright, fresh, herbal chimichurri sauce, and ceviche every day that changes throughout the week” — range from $4 to $9. “We really wanted to structure the menu in a way where anyone could come in and order what felt right to them,” Perez-Gallardo says.

Their commitment to sourcing locally is a Hudson-rooted method of cooking. “There’s been a long history of this farm-to-table ethos in the Hudson Valley,” Perez-Gallardo says. “But the trend is seemingly the same, which is what the bounty of the harvest here has to offer. For us, it was interesting to start a project that takes those things into consideration, still sources from local farms, but seeks to provide a different approach to food. We definitely source as best we can from local farms but we’re not trying to shove it down your throat.” That means while they’ll serve locally caught fish in their ceviche, they’re not afraid to order a pineapple or a plantain for many dishes in their self-described “tropical” cuisine.

Also in true Hudson form, Perez-Gallardo and Black were entirely hands-on in the opening. “We didn’t start with any investors — it was just money that we had made from catering,” Black says. “We tore the ceiling down ourselves, we retiled the floor, we reupholstered the bar stools with this incredible fabric that we made with one of the artists in the community.”

They weren’t alone in their efforts; like any good community space, Lil’ Deb’s came about through group effort. “Hudson is sort of known for having a lot of builders, and it was really amazing for us to witness everyone we know come out, support us and really lend their talents to the project,” Perez-Gallardo says. “We did a lot for meal trade. We’re serving a lot of meals for half-price right now.”