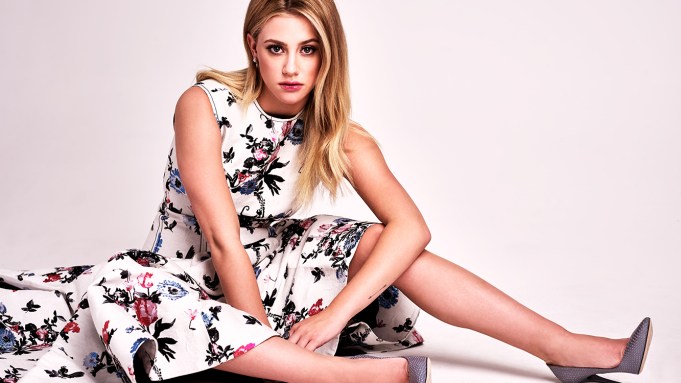 Lili Reinhart moved to Los Angeles on Jan. 8, 2016; exactly one year later, she found herself shaking hands with Viola Davis and gawking at Ryan Reynolds at the Golden Globes after parties. “I was completely overwhelmed, but in an otherworldly kind of way, in a great way,” she says, over the phone from on set in Vancouver. “It’s so weird to me because our show hasn’t aired yet, so part of me feels like I’m somewhere I shouldn’t be, you know? Because no one knows who I am. But it was incredible. I walked by Natalie Portman and she is one of my idols. And I was just like ‘holy s–t, she’s even tinier in person!’”

The 20-year-old is understandably still pinching herself. After attempting a solo move to Los Angeles at age 18, she retreated back home to Cleveland after five months of no success. “That was July 2015,” she says. “And I sat around for six months and thought about whether I wanted to try again, and if I should go back out there. I did a self tape at home with my mom, and we sent in the tape and it didn’t go anywhere. But then I moved to L.A., and a couple days after I moved my manager was, like, ‘so they still haven’t found that girl for Betty. I want you to go in again and try.’”

In “Riverdale,” she is Betty Cooper, but her version is a modernized take on the good-girl-next-door narrative, breaking away from the “plucky, happy-go-lucky light of the Fifties” and showing her as a “dark real teenager in today’s world, dealing with social media.” Reinhart wasn’t previously familiar with the Archie empire, which meant she was able to craft a Betty from scratch.

“Our Betty Cooper is still the girl next door — she literally lives next to Archie. And she’s the blonde all-American girl, she’s so sweet and forgiving, gives people the benefit of the doubt and second chances, wears her heart on her sleeve,” Reinhart says. “But she’s also incredibly broken on the inside, for many different reasons. For one thing, she suffers from mental health issues, and that’s something that I resonate with — I struggle with depression and anxiety, and I’m very open about that. So I can very much relate to Betty in that way, and that there’s a vulnerability inside.”

Making her mark on such a storied character, with a 75-year history a large swath of Americans know lovingly, is certainly a prime way to launch into an acting career. As Reinhart puts it, “what a difference a year makes.”