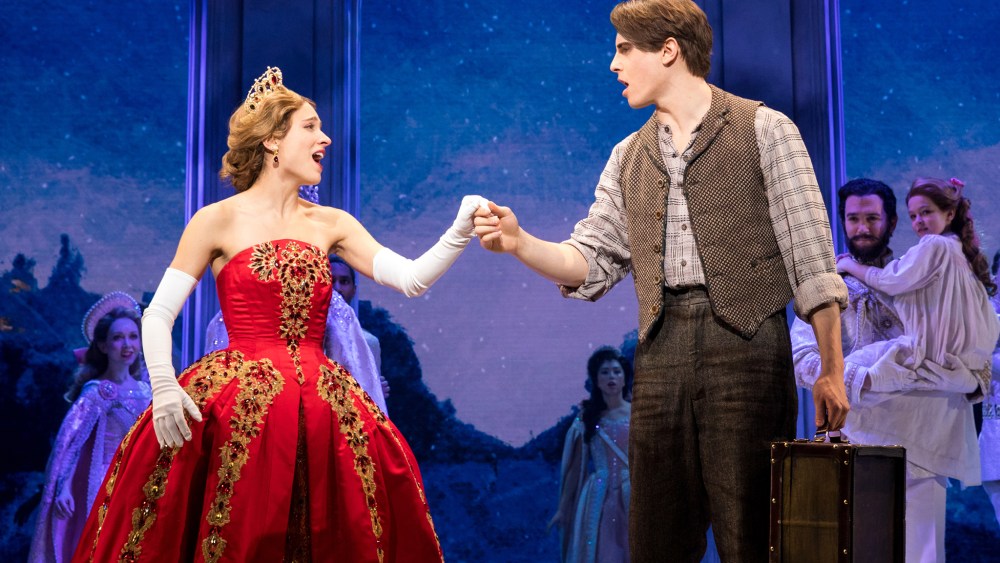 Linda Cho isn’t a wedding gown designer, but her creations do tend to make her subjects cry.

Cho, who won a Tony Award for her work on “A Gentleman’s Guide to Love and Murder” in 2014, designed the costumes for the well-received Broadway adaptation of “Anastasia.” The production premiered at Hartford Stage in May 2016, but Cho has since updated the costumes at the request of director Darko Tresnjak. One such update includes the addition of a show-stopping crimson gown worn by Christy Altomare as Anya during the finale.

“I had about a few hours to design it and four days to build it,” Cho says of the gown. The play had already been in previews at Hartford when Tresnjak asked her to make it. It features a whopping 25 yards of ruffle and required a total of 12 people to complete.

“The red, to me, is very Russian, and the decoration on the front of her bodice is reminiscent of the double-headed eagle, the symbol of the royal family,” Cho says. “The actual silhouette was something I had made up. It does have a feeling of an old-fashioned gown, but the thin underskirt and the voluminous overskirt are more of a 1950s silhouette.”

Altomare says she cried the first time she tried it on — and she wasn’t the only one brought to tears. Cho says “a number of ladies” cried during fittings, including Lauren Blackman, who makes her Broadway debut in a billowing white gown as Tsarina Alexandra.

Cho turned to paintings, photographs — including those Tsar Nicholas II took of his family — and museum catalogues while doing the research for “Anastasia.” She makes it clear she didn’t “consciously copy” anything from either the 1956 film or the 1997 animation, though she did include a nod to the animated adaptation.

“Fans of the [animated] movie came to see [the Hartford production] and expressed disappointment that they hadn’t seen the blue dress, so I actually changed it for Broadway,” she says. “In the film, it was strapless, but I thought that that was giving away a little too much. I already had a strapless red gown for the end, so I [added] beaded straps. I wanted [the realized gown] to be a little bit better.”

Once she finishes her research, Cho typically takes about an hour to draw and paint the sketches — an amount of time she says sounds “flippant,” but is reasonable considering the extensive research she does. She prefers to pick fabrics for the whole show at once — “I can’t design one gown in isolation” — and requires “a huge surface area” and “thousands of swatches” to choose from.

Cho manipulates colors and silhouettes to highlight Anya’s transformation from street sweeper to royal. Anya starts out in dark, heavy fabrics, slowly shedding layers as she starts to overcome her memory loss. By the time she heads to Paris with Dmitry (Derek Klena) and Vlad (John Bolton), we see her in a sophisticated white suit — a choice, Cho says, that symbolizes a change of season, difference in Anya’s financial situation and, of course, a sense of hope.

Anya’s costumes in the second half of the play steal the show, but the Dowager Empress’ looks throughout the production come in a close second. Her outfits are the epitome of opulence — deep hues, patterned gowns and furs. And Cho says actress Mary Beth Peil has the “majestic” personal bearing to match.

“Some actresses you work with look like an unmade bed no matter what you put on them,” she says. “Mary Beth Peil is the exact opposite. If you see her in a muumuu backstage, she still looks incredible and regal and royal.” We surmise the Dowager Empress wouldn’t be caught dead in a muumuu, but to each her own.

“Anastasia” is in previews. It officially opens on Monday.