The Whitney Museum’s politically minded “An Incomplete History of Protest” exhibit has made its way onto sweatshirts.

Lingua Franca founder Rachelle Hruska MacPherson has partnered with the museum and with Stateside to launch a line of sweatshirts, sold in the museum’s shop at $125, inspired by the messages of protest and resistance on display in the exhibition, which opened in September.

Popular among celebrities and fashion folk alike for their cashmere sweaters with hand-stitched sayings, first hip-hop lyrics and more recently politically minded phrases, Lingua Franca’s partnership with Stateside has produced two sweatshirts for the Whitney, one reading “give a damn” and the other, “solidarity.”

MacPherson became close with the museum’s product development manager Lauri Freedman and knew she wanted to find a way to work together, but her line’s typical price point of $360 to $400 prevented her from seeing a way in which their items could be accessible for the museum’s shop, which is generally much less expensive.

Related: ‘An Incomplete History of Protest’ Exhibit at the Whitney Museum

“Then I had coffee with my husband’s old roommate Moise [Emquies], who founded Splendid, sold it and started Stateside, and I was, like, ‘I actually think we could do something together,’” MacPherson said Thursday evening during a cocktail party at the museum to toast the line’s launch.

Emquies was able to make much less expensive versions in cotton sweatshirt form, and the collaboration was in business.

“When they launched the protest through the ages exhibit, it was the perfect chance for us because we’d been doing all these politically charged sweaters,” MacPherson said. “It was very hard to pick two sayings, and they had to be kind of short to keep the price point down, with the hand-stitching. ‘Give a damn’ and ‘solidarity’ are both in the exhibit as posters. ‘Solidarity’ is such a positive message — you don’t necessarily have to be political. The Whitney has a lot of tourists from all over the country from all political sides…but the ‘give a damn’ is obviously really politically charged and I love that about it.” 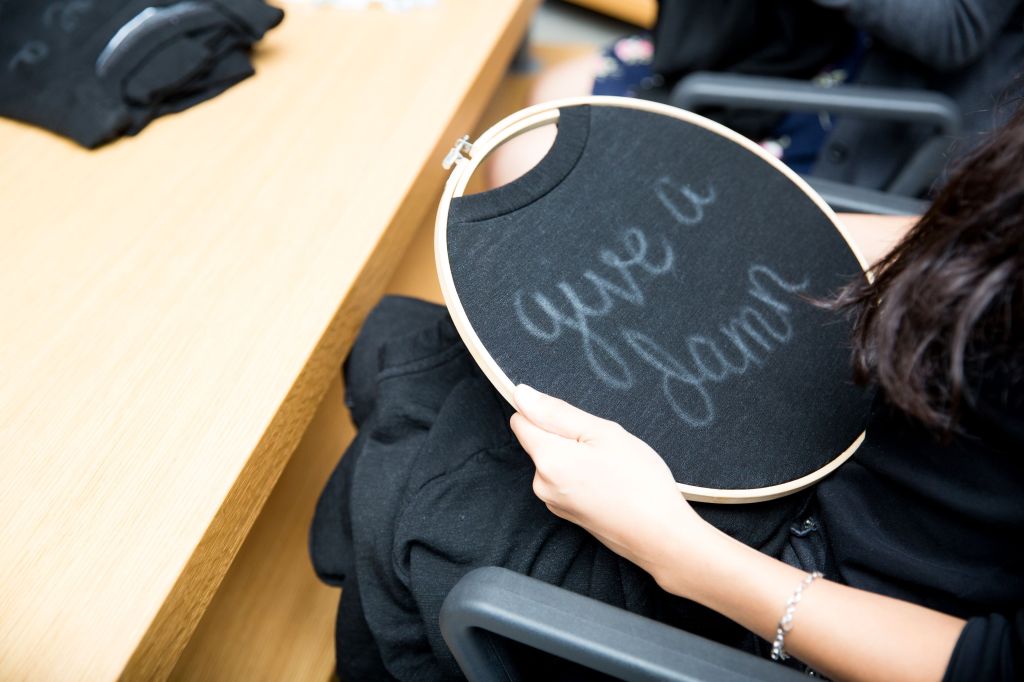 Lingua Franca built a fan base off of sweaters reading things like “it was all a dream,” “I miss Biggie,” “champagne mami” and “don’t sweat the technique.” MacPherson’s migration from hip-hop lyrics to political statements like “I miss Barack,” “nasty woman,” “love trumps hates,” “I didn’t vote for him” and “resist” was spurred from a reaction to the presidential election and the proposed travel ban.

“I had 45 women working for me embroidering, right? The day after the election it was like a pin could drop and you would hear it,” she says. “People were crying; we had an Iranian there who didn’t know if she would ever make it home, and [the political sweaters] really grew out of most of my employees being affected by this administration, and me for the first time feeling like I actually knew people who were like, ‘We might not be able to see our families if this travel ban goes through.’”

Her own line of resistance sweaters gives $100 of the purchase order to a charity of the customer’s choice, which has led to close to $50,000 in donations to charity. The Whitney line will benefit the museum.

“Just by buying a sweater, you’re supporting; the women make $25 an hour per sweater, some of them make $50, which is a living wage,” she says. “You’re supporting women, and on top of that you’re wearing a message that is putting out to the world, ‘Hey, I am resisting.’”

Dianna Agron Is Ready for Her Next Act

Alex Wolff on Growing Up in Show Business

Dita Von Teese Banned From Performing at Hulaween This Year