The head of the Dahl Restaurant Group cut her teeth in the apparel industry before a life-altering tragedy drew her to to cooking.

Lisa Dahl has an angel watching over her. His name is Justin.

An accomplished and award-winning self-taught chef, Dahl introduced the idea of fine dining to the popular tourist destination of Sedona, Ariz., 25 years ago. Since that time, as executive chef and chief executive officer of the Dahl Restaurant Group, she has opened five eateries in Sedona and racked up accolades including featured chef at the James Beard House two times and the 2019 Food Pioneer from the Arizona Restaurant Association’s Foodist Awards, which also named her 2018 Top Chef last year. She was also awarded the Best Chefs of America Hall of Fame Award by National Elite, a national restaurant industry organization, is a regular on the Phoenix morning shows and has been featured on The Food Network.

But none of this would have happened if it wasn’t for a life-altering tragedy she endured that made her give up a career in fashion and turn to food. On a March night in 1994, her 22-year-old son Justin jumped on his bike and rode over the Golden Gate Bridge to visit a record shop in San Francisco’s Haight-Ashbury area “and didn’t come home,” she said. He was killed trying to break up a robbery as a Good Samaritan.

“My life came to an end,” Dahl said. “I knew I couldn’t stay there. I had to leave and start over.”

She was drawn to Sedona, which is also renowned for its spiritual energy, stunning red rock views and vast natural beauty, as a place to try to heal.

Dahl’s background up until then had been in fashion. She grew up in Indianapolis, and from an early age was immersed in her family’s fashion business. Her mother, Dorothy Levinson, who died in November at the age of 94, attended the Fashion Institute of Technology in the Forties and then returned to the Midwest to open a chain of cutting-edge women’s stores called Dorothy’s that included an unconventional location at the Indianapolis Motor Speedway. She opened her first unit at 19 and operated those stores for nearly four decades. Levinson’s sense of fashion and creative merchandising skills were ahead of her time and her daughter embraced the opportunity to follow in her mother’s footsteps.

Dahl recalled how exciting it was to “get to go to fashion weeks in New York as a kid. I loved that more than anything else.”

But when Dahl was in her 20s, she decided to embrace her hippie side and relocate to the San Francisco area. “I ran away from home,” she said with a laugh. She worked in “an idyllic boutique” in Sausalito, Calif., and another in downtown San Francisco before becoming “a showroom girl” and accessories rep, traveling around the West Coast selling shoes and jewelry.

But once Justin was murdered, that life came to an abrupt halt.

Cooking had always been a passion for Dahl and something that she and her son enjoyed together. As a teenager, she’d taken space in a sandwich shop in a health food store selling vegan dishes before they became all the rage. And she also had a little side job cooking for three wealthy eccentric men.

So when she relocated to Sedona, Dahl turned to food as a way to heal. She and her former partner, Andrea Di Luca, pooled their money, came up with $40,000, bought an existing restaurant and opened Dahl & Di Luca in West Sedona in 1996. 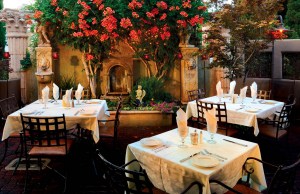 Dahl said her goal even then was to create a fine dining experience that could help transform Sedona from a place to hike or mediate to a true destination for foodies. Initially, the restaurant struggled and there was talk of closing it. But by tweaking the menu and the ambiance “we hit $1 million in revenue on our our-year anniversary,” Dahl said.

And 24 years after opening its doors, the upscale Italian eatery is the most successful of Dahl’s five restaurants — which she credits her son with orchestrating. “Justin lives there,” she said. “He haunts it, in a good way. I feel his angelic presence.”

Once Dahl & Di Luca was stabilized, she opened Cucina Rustica 16 years ago on the other side of town. The more-rustic Italian restaurant was followed by Pisa Lisa, an upscale pizza eatery that opened six years ago. 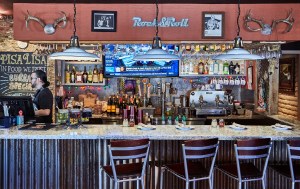 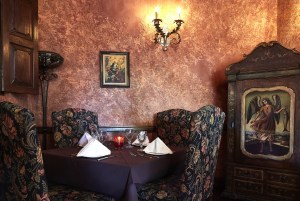 Cucina Rustica is designed to look like a villa in Tuscany.

But her most ambitious project to date is Mariposa Latin-inspired Grill with a priceless view of the red rock landscape, which opened five years ago on Sedona’s main commercial artery. She writes in the cover page of the menu: “My pledge to…my angel Justin and the creator of this beautiful Sedona land, is to honor it and never take for granted what this stewardship truly means.” She chose the name Marisposa, which means butterfly in Spanish, because it symbolizes “transformation, growth and evolution,” she said. “It’s a healing totem for a lot of people and a symbol of hope.” Its menu is also unique with handmade empanadas, ceviches, inspired by Dahl’s travels to Argentina, Uruguay and Chile. 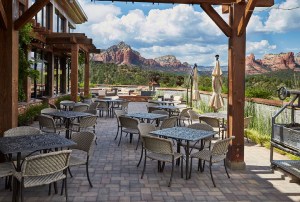 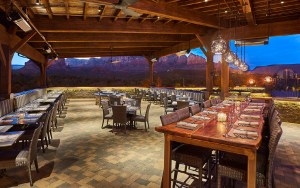 Mariposa has an enviable view of the Sedona red rocks.

Her most recent addition is Butterfly Burger, a Couture Burger Lounge, that offers many of the items that are also popular at Mariposa such as the Oui Oui Monsieur, a burger smothered in charred onions, Gruyere cheese and Dijonnaise sauce on grilled caraway rye bread, and the Funghi Sublime, which is topped with sautéed mushrooms and finished with imported truffle gouda. She even brands the buns with a BB, “sort of like D&G or Chanel,” she said.

Whether it’s the upscale Italian at Dahl & Di Luca, the creative wood-fired pies at Pisa Lisa or the beet burger at Butterfly Burger, Dahl uses only the freshest ingredients, much of it locally sourced. Her mantra is: “When you cook with love you feed the soul,” which translates into flavors that are not overworked and food that can stand on its own. 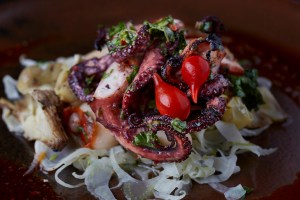 It’s while creating dishes that she feels Justin’s presence the most. To this day, she calls him her guardian angel and there are subtle references to him throughout her five restaurants.

“I really believe there is no death and my son is still with me,” she said. “I’m the paint, but he’s the brush.”

But it’s not just her food that sets Dahl’s restaurants apart. Their design has also turned heads.

“Food is always number one, but you’re also setting the stage and creating the choreography,” she said. “Many restaurants are very spartan — not mine.” 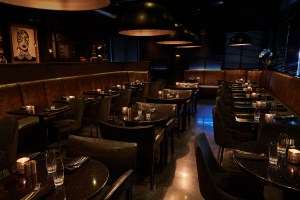 The newest addition is Butterfly Burger.

Dahl designs all of the restaurants herself, a nod to the creatively she inherited from her mother. She draws on her fashion background and her love of color to infuse the locations with distinct touches. And she spares no expense, with both the interiors and exteriors works of art. A 1,000-pound door handcrafted from African and South American stone and metal sculptures mark the exterior of Marisposa, while Cucina Rustica sports a homier, more colorful design intended to be reminiscent of an Old World villa in Tuscany. Butterfly Burger, which opened in September, features dark, wood-lined walls, faux alligator-leather booths and a marble bar with a rolling library ladder for access to the top shelf spirits.

It’s Butterfly Burger that Dahl believes may one day be transportable to other markets. “It was built for expansion,” she said. 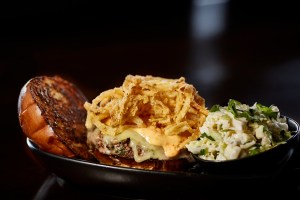 Dahl revealed that she just hired a chief operating officer for the first time and she’s started to look at locations outside Sedona. She’s considering a new development in Gilbert, Ariz., a bedroom community of Phoenix and Scottsdale where entrepreneur Joe Johnston is adding on to his Agritopia development, an upscale residential and commercial community.

“He’s asking us to come in,” Dahl said. “And we’re thinking about it.”

And she said that she’ll open a second outpost for Pisa Lisa across the parking lot from Butterfly Burger next year, bringing the total number of restaurants in town to six.

Although there’s no denying Dahl’s success — she served more than 400,000 meals last year across the five restaurants and employs close to 250 people — it hasn’t all been a walk in the park. She’s been criticized by some of the locals for her ego and her aggressive expansion in what is essentially a small town. She’s even disparagingly been called “The Shoe Chef,” a reference to her former career.

But Dahl is nothing if not resilient.

“Things like that just toughen me up,” she said. “I know why I do what I do. I create spaces where angels come through. I never did this for the money, but to create a joyful experience.”