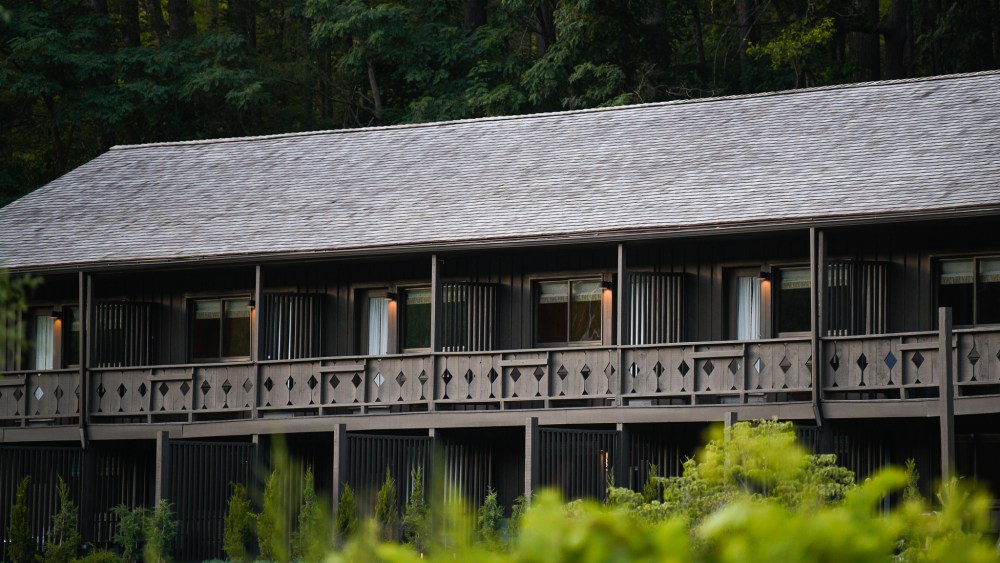 Little Cat Lodge is open and ready for New York’s colder months ahead. Located near Catamount Mountain in the foothills of the Berkshires, the boutique hotel offers Alpine-style lodging and dining for all seasons.

The hotel is the latest project from Noah Bernamoff and Matt Kliegman, whose collective projects in New York City include Black Seed Bagels, The Smile, Celestine and the recently opened Pebble Bar near Rockefeller Center. Both men reside part-time in the Hudson Valley, and while the idea of opening a restaurant or hotel upstate was in the back of their minds, they weren’t actively looking for a project when a friend flagged a lodge that was for sale in Hillsdale, New York.

The property is located between artsy towns Hudson, New York, and Great Barrington, Massachusetts, and the pair hope that the hotel will appeal to weekend guests from both New York City and the Boston metro region. “The idea of being between [the two cities] was really quite appealing,” says Kliegman, adding that the property also resonated with them on a personal level. “Noah’s from Montreal, he grew up skiing; I’m from New York and grew up snowboarding. It’s something that we enjoy and the reality is there’s really not a great après-ski experience at the mountains that are proximate to New York City.”

The Hudson Valley continues to see an influx of boutique hotel developments in recent years. In Hudson, notable projects include the high-end Maker Hotel. West of the river, the Wylder hotel group refurbished a large property this spring in Tannersville, luxe-retreat Piaule opened in Catskill, and a new Auberge property debuted near New Paltz. Located further east, the Catamount region offered an unsaturated market to introduce a boutique property.

“It was an area where not many people were doing things,” says Kliegman, who with Bernamoff also co-owns Otto’s Market in Germantown, New York. “We don’t mind being a bit of a pioneer.”

The property underwent a significant renovation before reopening, although the team aimed to keep the Alpine-style “spirit” of the property alive despite a full-gut of the interior and “reconceptualization” of the exterior. The team worked with designer Loren Daye of Love Is Enough to reflect the aesthetic heritage of the Alps without leaning too far into interior trends. The idea was to create an environment that would be conducive to dining and relaxation, whether that means comfortably drinking a hot toddy outside in the winter or spritz in the summer.

“Our approach was…let’s not try to modernize the feeling of this entire property. Let’s actually bring the Alpine essence out even further,” says Bernamoff. “I do think that we’ve taken a thoroughly idiosyncratic design path that produced a unique product that does not look, feel, or in many ways compete with any of these other very beautiful properties [in the area].”

The hotel’s restaurant program is Alpine-inspired, but not exclusively Swiss. “We want the food to reflect the full scope of cuisines that are represented throughout the Alps,” says Bernamoff, noting that the menu pulls from elements of French, Northern Italian, Austrian, German and Slovenian cuisine. “It’s going to be a little bit of a melting pot — a fondue pot — of different Alpine cuisines.”

There are two dining concepts onsite, a restaurant and casual tavern that will appeal more broadly to a crowd of local regulars. The tavern menu veers from the Alpine theme with the inclusion of classic American dishes that are seasonally driven and locally sourced from farms in the area. “Having that flexibility to service our broader local community is great,” adds Bernamoff.