Erik Ramirez returns to his roots with Llama Inn, a Peruvian restaurant opening in Williamsburg on Nov. 18. 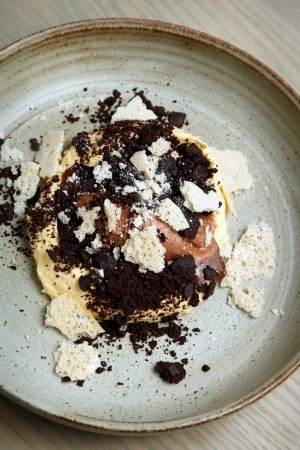 “For me, there’s a lot more to it than what people think it is,” Erik Ramirez says from behind the robataya grill in the open kitchen at Llama Inn, the Williamsburg Peruvian restaurant he is opening as executive chef on Wednesday. Kitted in a pair of Stan Smiths and a custom apron from Jones of Boerum Hill — a little electric pink “Llama Inn” stitched along the belt tie — the 34-year-old chef who’s bringing a taste of Peru to the Brooklyn neighborhood is talking about his mission to combine the food of his heritage with the borough he calls home.

Llama Inn, designed by Joseph Foglia Designs and named for the 1957 Inge Morath photograph “A Llama in Times Square,” is Ramirez’s first solo restaurant endeavor. Though the corner location on Withers Street was a bit of a chance draw, he immediately liked it due to its likeness to Peruvian corner bars. The menu infuses classic Peruvian dishes prepared with a New York approach with dishes like fluke ceviche and duck sausage (made in house), as well as a section of anticucho options. “We’re doing something more approachable, not so different,” he says as he brushes pieces of pork belly with Chinese five spice, soy sauce, garlic, black pepper and char siu, a Chinese barbecue.

“We want to bridge the gap between Peru and New York,” he says, something he is aims to do across the board at Llama Inn. For his chocolate needs, he’s working with Bryan Graham of Fruition Chocolate out of the Catskills, who is using Peruvian cacao beans to make a chocolate for Ramirez — “essentially Peruvian chocolate, but made here,” he says. “We want to cook whatever we want but with Peruvian undertones, ingredients [and] attitude.”

That mission would certainly have come as a shock to Ramirez a few years ago. The son of two immigrants from Lima, Ramirez was raised in an area of Northern New Jersey known as Little Peru, in a home fed by his mother’s and grandmother’s Peruvian cooking. He attended the Art Institute of Philadelphia from 2001 to 2002 before moving to New York at age 25 and landing a job as a sous chef at Eleven Madison Park in 2005, where he stayed for three years. He then landed at Nuela in 2009, which eventually became Raymi, where he was the executive chef until 2013.

It was his first visit to Peru as an adult that changed Ramirez’ attitude toward his culinary upbringing. He’d grown up visiting the country every summer from the age of nine until he was 16, at which time his grandmother died and his parents separated, ceasing the annual trips. While chef de cuisine at Nuela, and then 28 years old, “I wanted to leave, I didn’t want to do Latino food,” he says. Nuela’s owner, Armin Torres, told Ramirez, “You’re Peruvian, you should cook like where you come from; it’s in your blood,” and promptly sent him to Peru. “And it was just amazing,” Ramirez recalls. “I thought it was something completely different.”

Llama Inn will start serving dinner, with plans to expand into brunch — “fun, stoner food” — and weekday lunch, for which Ramirez is planning sandwiches and fruit smoothies. “They’re just juicy,” he says of the sandwiches. “And really good.” If all goes well, the restaurant will be the flagship of several Erik Ramirez projects around New York; he’d like to have a late-night skewer and beer spot, a cevicheria by the beach, a sandwich place — “all within the same brand.”

The opening of Llama Inn will mark a coming full circle for Ramirez, who is a long way from the young chef intent on cooking anything but Peruvian food. He’s bringing his culture to the Brooklyn neighborhood he’s now called home for a decade. “It’s essentially a Peruvian restaurant,” he says, “but it’s not your typical thing you would find in Queens or Manhattan.”