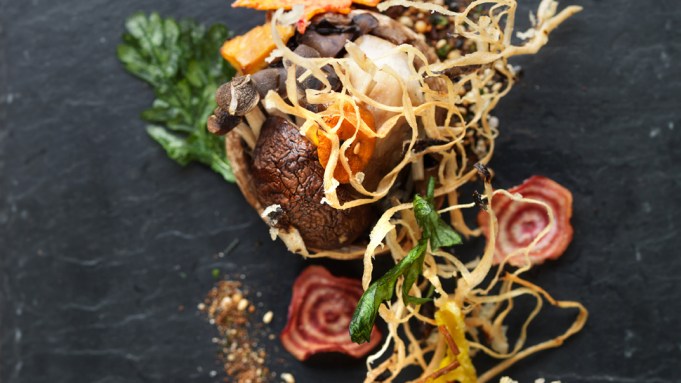 The British capital’s restaurant and bar options are extensive — ranging from homey gastropubs to Michelin-starred tasting menus — but nothing beats a recommendation from a resident. WWD asked six of London’s buzziest designers about their favorite places to indulge.

“Umu in Mayfair — really expensive but delicious — which specializes a lot in modern sushi [and is] a little bit more experimental. But they also have the traditional stuff. Also, The Richmond in Hackney, which has a lot of raw fish as well as oysters and it’s a fantastic atmosphere.”
— Nicholas Kirkwood

“Dishoom for the chicken ruby and Tonkotsu for tonkotsu.”
— Marta Marques and Paulo Almeida

“Scott’s does a delicious lobster linguine. in Shoreditch has a great tasting menu — it’s great to be able to try a bit of everything. Barrafina is a modern spin on tapas with a fun atmosphere — you can’t make reservations, though, so get there early.”
— Mary Katrantzou

“Petersham Nurseries in Richmond has an amazing restaurant in the garden center — it’s by far one of my favorite places. Chinatown — for dim sum with my team after the show to celebrate. The Rose Bakery upstairs in Dover Street Market, and The River Café with my family on the weekend.”
— Simone Rocha

“I love Colbert in Sloane Square for brunch, and for catch-up din- ners with friends I like The Palomar, Bocca Di Lupo and Gymkhana.”
— Mary Katrantzou

“Definitely Mildred’s in Soho. It’s a vegetarian restaurant, but what’s really fun is that everything is so delicious that you can bring a serious meat-eater and they won’t even notice that the menu is vegetarian. Then there is Moro in Exmouth Market, and a small place on Kingsland Road in Hackney called A Little of What You Fancy. The Towpath [Café] on [Regent’s] Canal in Haggerston does these fantastic grilled-cheese sandwiches…and a really delicious watermelon and feta salad.”
— Thomas Tait

“Shoreditch House — it’s great for work and play. The Boundary has the perfect roof terrace for sundowners — at the moment my favorite is an Aperol Spritz. The Chiltern Firehouse does a cocktail called Cinq a Sept, which I definitely recommend.”
— Mary Katrantzou

“The Royal Oak on Columbia Road is my local place; there’s always a friend sitting at the bar. I’d order a Jameson on ice. The Fumoir bar in Claridge’s — I love this room…I love Claridge’s.”
— Simone Rocha

“For after-work drinks I often go to The Groucho Club in Soho or if I want something [near] my studio I go to The Punchbowl pub in Mayfair. My preferred cocktail is a tequila negroni.”
— Nicholas Kirkwood

“There’s a bar in Homerton called The Gun. That’s good. And there’s a little gay bar on Kingsland Road in Haggerston called The Glory, which is new and very cool.”
— Thomas Tait