London’s retail and food scene is booming with pop-ups and new restaurants which are opening in time for fashion week.

By Fiona Ma
with contributions from Natalie Theodosi
on September 14, 2018
View Slideshow 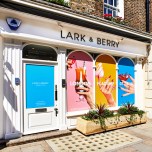 SHOPPING AROUND: London’s retail scene is booming with pop-ups, new shopping districts and stores which are opening in time for fashion week.

Soho, which is already home to cult streetwear brands including Supreme, Palace and Axel Arigato, is attracting more, with California surf and casualwear brand Stüssy unveiling a stand-alone store. This is the second time Stüssy is trying out London: It closed its first shop in Covent Garden in 2009.

Nearby, Swedish footwear brand Eytys has set up its first flagship featuring the brand’s full collection of unisex footwear, jeans and ready-to-wear. The 1,000-square-foot space has been designed to resemble a Sixties Swedish brutalist building, and there are also injections of postmodernist style from the Seventies and Eighties.

The vintage denim brand Re/Done has collaborated with American footwear company G.H. Bass & Co. to relaunch the label’s signature penny loafers in two different styles. The Weejuns loafers, worn by stars as diverse as Audrey Hepburn in “Funny Face” and Michael Jackson in his “Thriller” music video, will be available to purchase during a two-week pop-up, which began Sept. 13, in the G.H. Bass & Co. store near Soho’s Golden Square.

Near Selfridges, the cultured diamond jewelry label Lark & Berry has opened its first physical store. It’s a small, laid-back space — complete with a popcorn machine, piercing studio and floral artwork on the walls — that aims to create a more inviting atmosphere than traditional jewelry stores. The brand is hoping the new space will help broaden its platform and give it room to experiment with new designs.

Over in Notting Hill, the Danish lifestyle brand Moshi Moshi Mind has opened its inaugural British boutique. The brand aims to create products that reflect a balanced lifestyle, with activewear, pajamas and rtw on offer alongside Moshi Moshi’s own tea blends and body-care items. The store is painted in a soft slate gray color, while floor-to-ceiling windows allow for natural light to reach the back, where a spacious fitting room, fitted with a wall length vanity mirror, is located.

EATING OUT: New places to eat have been sprouting up all around town. Next to Harrods is the newly opened Osh on Knightsbridge, an Uzbekistani restaurant that boasts an open grill and kitchen in full view of guests. Serving traditional Uzbek delicacies, dishes include slow cooked lamb, sea bass with ponzu and black cod cumin. Partitioned over three floors, the space has been designed to mimic the Yves Saint Laurent Marrakech museum, with colors influenced by vintage Hermès adverts.

Further East — with regard both to cuisine and location — Chinese Laundry Room, the popular all day breakfast and brunch Chinese restaurant that opened in 2015 but closed due to a major fire, has found a semipermanent home in Highbury. Open until March, it will continue to serve chef’s Peiran Gong and Tongtong Ren’s rendition of their native delicacies. Milky little buns, rice bowls and cong you bing will be served on the brunch menu while Manchurian lamb, lobster tail and salted cod with aubergine will be on the dinner menu.

Keeping tradition alive, France’s oldest gourmet tea company Mariage Frères, has opened an emporium in the heart of Covent Garden. It occupies a five-story Georgian house, now home to nearly 1,000 different varieties of rare teas from 36 different countries. To sample some of the tea, the first floor Salon de Thé offers afternoon tea alongside breakfast, brunch, lunch and dinner options, with dishes such as inspired by tea flavors. Tea–making accessories will also be available to purchase on the fourth and fifth floor.