Things to See and Do During London Collections: Men

The top new restaurants, art exhibits and shops to check out in England's capital. 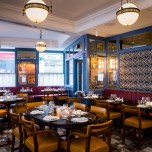 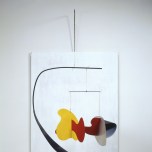 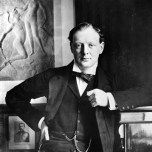 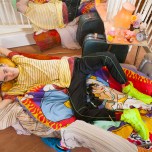 WAGYU DELIGHTS: The newest addition to Mayfair’s buzzy Conduit Street, near Sketch and Brasserie Chavot, Tokimeite offers authentic Japanese cuisine. Chef Yoshihiro Murata, who rates seven Michelin stars across his three restaurants in Kyoto and Tokyo, created a menu based on classic techniques passed on from older generations. Wagyu beef is one of Murata’s most popular ingredients, and standout dishes include a tender beef tartare and the Wagyu nigiri from the sushi menu. The restaurant’s decor is naturally inspired by the Far East and references the different elements of the Japanese seasons. Interior designer Yasumichi Morita played with contrasts to convey the moods of fire and water. The rich gold lighting on the ground floor resembles fire, while upstairs the platinum ceramics and rippled glass symbolize water. — Natalie Theodosi

IVY LEAGUE: The new Ivy Café is tucked in a quiet corner, moments away from Selfridges and Marylebone High Street. With half of the tables reserved for walk-ins, customers don’t have to deal with the month-long waiting lists that sister restaurant Ivy Chelsea Garden generated when it opened. Interiors feature cozy vintage red leather banquettes, while the menu offers all-day dining, with highlights including toasted crumpets served with Marmite — a gooey spread made from yeast extract that is beloved by the Brits — and a creamy lobster risotto. — Natalie Theodosi

MOBILE ART: Tate Modern is hosting the UK’s largest exhibition on Alexander Calder, best known for his kinetic sculptures. Calder combined his knowledge of art and engineering to create wire sculptures and motorized objects, which played a big role in defining 20th century Modernism. The exhibition features some of the artist’s best-known motorized sculptures, as well as the famous wire portraits he created of the artists Joan Miró and Fernand Léger. The exhibition runs through to April. — Natalie Theodosi

DEBT COLLECTORS: Winston Churchill might have had a fine taste for tailoring, but it seems he wasn’t willing to pay for it. Savile Row tailor Henry Poole & Co. has been perusing its archives, and has brought to light customer records that date as far back as 1846, revealing Churchill’s outstanding bill for 197 pounds. The iconic British statesman reportedly refused to make a payment, claiming that by wearing Henry Poole suits he was benefitting the tailor’s business. Edward VII, then Prince of Wales, was another customer noted in the company’s records for his irregular payments. To celebrate the company’s history of dressing some of the most important men in the world, the tailor has launched the Hall of Fame, a new room that showcases its archive and garments produced for the likes of Napoleon III, Czar Alexander II of Russia and Charles de Gaulle, available to view by appointment. — Natalie Theodosi

YOUNG AT HEART: Fashion’s fascination with youth is the subject of the latest exhibition of the Fashion Space Gallery, located at the London College of Fashion. Launching on the first day of London Collections: Men, “Mad About the Boy” will focus on the teenage boy and the ways he’s presented in designers’ collections and fashion images. Works by Raf Simons, J.W. Anderson, Meadham Kirchhoff, Nasir Mazhar and Nick Knight will be on display, exploring the different notions of the young male, from rebel to raver to sexual fantasist.

A series of audio recordings of designers and photographers discussing the memories of their youth, as well as tableaux designed by set designer Tony Hornecker, have been included to create an immersive experience.

“The fluidity and possibility of the teenage years seem to unite fashion’s obsession with the boy. Designers young and old return to the same themes — constructing, rehashing and shaping the dream male, season in season out,” said the exhibition’s curator and Showstudio’s editor, Lou Stoppard. — Natalie Theodosi

BACK TO THE TWENTIES: Alan Yau, the restaurateur behind Wagamama and the Hakkasan Group, has realized one of his most ambitious projects to date with the opening of Park Chinois, in the heart of Mayfair. Yau was dreaming of a Twenties dance hall while creating the 15,200-square-foot space on Berkeley Square. As a result, the restaurant has a touch of Gatsby largesse with gilded mirrors adorning red painted walls, a live band entertaining guests and floral-print furniture taking center stage. The menu features all the dishes Yau would cook if he were to host a dinner at home, including Peking duck, salt and pepper squid and jasmine tea smoked ribs. — Natalie Theodosi

ITALIAN JOB: Sartoria, the old Savile Row favorite, has had a makeover just in time for London Collections: Men with interiors designed by David Almada, who recently worked on The Arts Club in Mayfair and The Norman boutique hotel in Tel Aviv. The renowned Italian chef Francesco Mazzei, of L’Anima restaurant, helms the kitchen as the restaurant’s chef patron. Highlights include a new all-day dining menu that features dishes from Mazzei’s native Calabria as well as other hot spots in Italy. It also boasts the new Libare Bar with a drinks list comprised of seasonal twists on Italian classics like Bellinis, Negronis and spritzes, alongside some original creations, with liqueurs created by Mazzei himself. — Rohaizatul Azhar

DOUBLE TROUBLE: More than 380 works by the design duo Charles and Ray Eames will be exhibited at the Barbican in east London. “The World of Charles and Ray Eames” explores their post-War ideas and creations including everything from architectural furniture and product design to fine art and multimedia installations. The couple — famous for their practical, modern and playful designs — created the renowned Eames Lounge chair and broke ground in the production of mass-producible fiberglass seating.

“For Charles and Ray, design was not simply a professional skill, it was a life skill — more than that, it was an essential attribute of life itself,” said Eames Demetrios, director of the Eames Office. “And not pretentiously. On the contrary, they never stopped challenging themselves to make their most iconic designs better and better — all the while having fun. The unprecedented array of objects and stories at the Barbican is not simply for admiration, but inspiration to folks in myriad fields.”

Curated by Lottie Johnson, the exhibition features a mixture of static displays as well as studiolike and multimedia spaces. On Jan. 13, there will be an Architecture on Film screen talk celebrating the pair’s experiments with design and moving image. The Barbican show runs until Feb. 14. — Joanna Taylor

EAST ENDERS: After a series of successful pop-up shops, Modern Society is finally settling down at 33 Redchurch Street in Shoreditch in east London. The store’s offer ranges from the apparel brand Être Cécile to The Gentleman’s Journal to flower bouquets, while the coffee comes courtesy of Embassy East. The store has also planned a string of events aimed at bringing together the locals and globals congregating locally at the likes of Shoreditch House. “I have opened several pop-up versions of Modern Society, but Redchurch Street is where it will have its permanent home, the area reflects the sensibility of the concept perfectly,” said owner Nazifa Movsoumova. — Joanna Taylor

BY THE SEA: The restaurateur behind Scott’s and Le Caprice, Richard Caring, has planted his flag in Berkeley Square with a new restaurant called Sexy Fish. Overseen by chef Ben Orpwood, the Asian fish and seafood restaurant also showcases art by Damien Hirst. The interior devised by Martin Brudnizki Design Studio is filled with the sea-inspired works by Frank Gehry, who has created distinctive fish lamps that float above the bar, and a modernist coral reef. Guests grazing on tempura prawns and Sexy Fish rolls can also stare at a giant black crocodile positioned along one of the walls. — Joanna Taylor