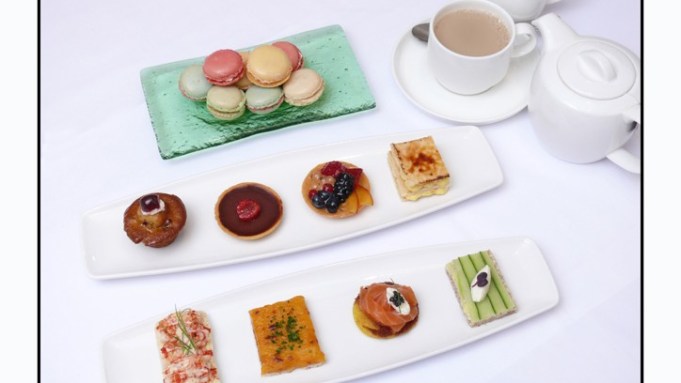 Who says downsizing has to be depressing? Not Nicole Farhi. The designer has begun offering a pint-size take on the beloved British afternoon tea at her Bond Street flagship. Concocted by Farhi and executive chef Annie Wayte, “Miniature Tea” offers treats inspired by the designer’s international travels, such as micro macaroons and petite patisseries, accompanied by copious cups of calorie-busting Chinese Pu-Erh tea. Since a little vice is almost everyone’s cup of tea, the menu, which weighs in at 16.5 pounds, or $30.70, will also include a complimentary glass of Champagne during London Fashion Week.

A three-course meal costs about 55 pounds, or $101, per person, excluding wine. Meanwhile, star-spangled French chef Helene Darroze stepped into Hartnett’s shoes at The Connaught in July, opening a namesake restaurant.

On the menu: Dover sole and Gillardeau oyster tartare with caviar d’Aquitaine jelly. Peppered with amuse-bouches, a three-course meal comes to about 75 pounds, or $138.

Quo Vadis may have a Latin moniker, but the restaurant and private members club, which reopened in June, offers a distinctly British vibe. Works by artists including Keith Tyson and Gavin Turk adorn the club’s library, private dining and billiard rooms, while head chef Jean-Philippe Patruno’s menus include rib of Lincoln red beef and Gloucester old spot terrine. The club is furnished in an autumnal palette with eggplant walls and forest green- and mustard-colored armchairs, while mirrored tables and lamps add a contemporary twist. There’s also a state-of-the-art honesty bar, which uses thumbprints to identify customers.

Fabulous baker boys David Muniz and David Lesniak are bringing a dollop of Americana to London. The pair, horrified by the thought of life without Stateside staples like red velvet layer cake, opened an Outsider Tart bakery counter at the Profile bar in Soho in July. The two already have an online business and stalls at various farmers’ markets in London. “Sure, you can get plenty of fancy French pastries, but when it comes to homemade cupcakes bursting with flavor, fillings and fluffy icing, there is a positive famine,” said Muniz, adding the bakery has a revolving menu, which, during fashion week, will include blondies on Monday and rocky road brownies on Friday. A brownie goes for 2.50 pounds, or $4.60.

As if he’s not busy enough shooting films and being married — happily or otherwise — to Madonna, Guy Ritchie has taken on a fresh challenge: pub landlord. Ritchie took over The Punch Bowl in tony Mayfair in June, along with London club kings Nick House and Piers Adam and Guy Pelly, a close friend of Prince William’s. The partners have gone for an authentic vibe, choosing not to fiddle with the 18th-century watering hole’s Georgian interior, which features dark wooden paneling, portraits of British politicos and low ceilings lit by candlelight. The menu, which offers main courses from 9.50 pounds, or $17.40, includes organic salmon with herb salad as well as traditional British favorite “bangers and mash.”

Roman Abramovich made headlines in May when he purchased Francis Bacon’s “Triptych 1976,” one of the artist’s most sought-after paintings, for $86.3 million, setting a record for Bacon’s work. Now, billionaires and those with smaller bank accounts alike can experience the British artist’s oeuvre, thanks to two exhibitions set to open in London. On Sept. 11, Tate Britain will unveil “Francis Bacon,” a retrospective that will display 60 works spanning the artist’s career. The gallery said its aim is to “examine Bacon’s sources, processes and thoughts.”

Meanwhile, a few miles north in Mayfair, John Rocha will offer the chance to admire Bacon’s work in a more intimate atmosphere. Lithographs of Bacon’s paintings — part of Rocha’s own collection — will hang in the designer’s three-story Dover Street flagship, alongside the tulle dresses and wool suits of Rocha’s fall collection. The designer’s permanent collection of modern Chinese art will also be on show.

Before the Swinging Sixties hit London, a major rite of passage among the British upper class was the annual presentation of their daughters at court, marking the young ladies’ launch into London’s marriage market. “The Last Debutantes,” an exhibition that runs through June at London’s Kensington Palace, looks at the final debutantes’ season in the summer of 1958, after which Queen Elizabeth II put an end to the ritual.

Among the show’s highlights are the myriad silk gowns — all with full tulle skirts and cinched-in waists — worn by the debs and their mothers for the final presentation at court. They include a pale beige chiffon Balmain dress with full pleated skirts and a duck egg-blue silk Dior dress adorned with a white silk rose corsage. There are also designs by Worth and Jacques Heim. To show how different fashion outside that gilded social circle had become, there are also skinny silhouetted Teddy Boy and Teddy Girl outfits on display — which heralded the changing times.

“[By 1958] people felt that the notion of presenting aristocratic girls to court was out of step with reality,” said Dierdre Murphy, the exhibition’s curator. “There was quite a lot of comment in the press [at the time] about elitism.”

Visitors to the show can relive those old-world customs: Interviews with former debs dishing about their experiences of the social season roll on a series of TV screens, while a dance coach is on hand to teach a Buckingham Palace-worthy curtsy.

While women’s looks may rule the runways during fashion week, men’s stores aplenty are opening all over town. In Mayfair, the Home of Alfred Dunhill has opened at the 18th-century Bourdon House — a former residence of the Duke of Westminster — on the corner of Davies Street, near Mount Street. In addition to offering Dunhill’s full range of men’s wear and leather goods, the three-story space boasts a spa, barber shop, private basement cinema and a members’ club, called Alfred’s. The store opened in late August and will mark its debut with a party during London Fashion Week.

Nearby on Savile Row, Lanvin will unveil its men’s store, while Dolce & Gabbana will celebrate the opening of its men’s wear boutique on Sloane Street with a party on Sept. 16, which will also fete Michael Roberts’ book “The Good Shepherd.”

Meanwhile, at the edgier end of the men’s market, London boutique b store will open a temporary shop at Selfridges on Oxford Street. Called Pop In at b store, the space is located in the men’s contemporary department on the first floor and will carry pieces by Bernard Wilhelm, Tim Soar, Siv Stodal, Ute Ploier and Hans Madsen. It will also carry b store’s fledgling own label line, which offers brushed cotton plaid shirts and pleated trousers.

The play highlights the early life of the singer, played by the Argentine actress Elena Roger, fresh from a turn as Eva Perón in “Evita” at London’s Adelphi theater. The play, directed by Jamie Lloyd, aims to “[capture] the glamour and squalor and the rise and fall of this complex, fragile and enigmatic performer,” according to the Donmar. Following its run at the Donmar, the play will transfer to the Vaudeville theater on London’s Strand from Oct. 21 through Jan. 24.

To ring the changes in a week filled with British designers’ collections, one London boutique is offering a glimpse of style à la dolce vita. Two Italian sisters, Valentina and Silvia Cangiano, have opened Milletre on Kensington’s tony Victoria Square to showcase clothing, accessories and beauty products that are made in Italy. The 900-square-foot space carries ready-to-wear labels like Sophia Kokosalaki and Missoni and footwear and accessories by designers including Michael Teperson, Francesca Mambrini and Amila.

“During the Eighties, if something was made in Italy, it made you want to have it,” said Valentina Cangiano. “This isn’t a relaunch of that, but a platform for new designers whose collections are made in Italy. We’re continually in search of new labels.”

Cangiano said she wanted to create a lounge atmosphere for the boutique, whose walls are lined with vintage Italian Vogue covers, so a DJ will spin a sound track ranging from Italian jazz to R&B throughout the day. Meanwhile, waiters will serve canapés and Champagne, courtesy of Locanda Otto e Mezzo, a nearby restaurant whose owners are partners with the Cangiano sisters in the business. “We want it to feel like your living room, with a relaxed atmosphere and the best personal service,” said Cangiano. The boutique — which takes its name, meaning 1,003, from the number of women whom Don Giovanni is said to have seduced — also carries denim and accessories for men.