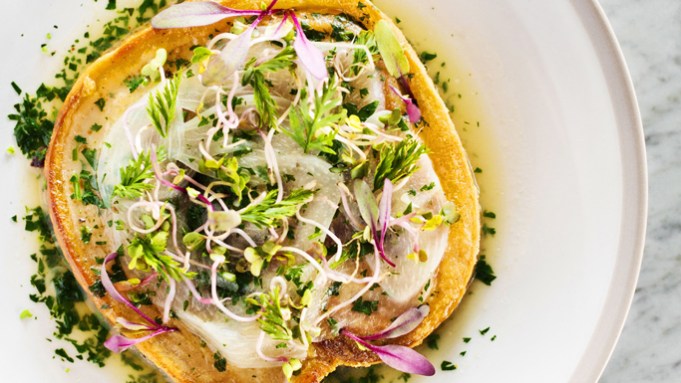 LESS IS MORE: Four years in Ho Chi Minh City gave chef Shawn Pham the culinary connection to his family’s culture that he was looking for. His one-month-old restaurant Simbal imparts the simplicity and balance that he observed in Vietnam into dishes like short rib potpie with lemongrass, annatto and bone marrow ($16). Said Pham, “From food to fashion to design to art, doing more with less has always fascinated me.”

SOUTHERN COMFORT: One thing remained the same for chef Nick Montgomery and restaurateur Ami Lurie in their move from the Asian flare of Momofuku to the southern style of Osso: fried chicken. The duo swapped mu shu pancakes for potato salad to create Osso, which opened in June as “a neighborhood joint serving simple food and drinks,” said Lurie.

NOLA IN L.A.: With a raw bar upstairs and a frozen daiquiri bar downstairs, Preux & Proper combines the vivacious vibe of New Orleans with Southern California freshness. The drinks pack a punch and the menu delivers California takes on NOLA classics, like smoked shrimp beignets ($10) and foie gras Po’Boys ($19). Born and raised in Louisiana, owner Joshua Kopel said the downtown spot he opened last December “has the same grit, heart and soul of my hometown.”

TRIPLE 8 PLAY: Succulent soup dumplings and steaming sake take over the old Trader Vic’s spot at L.A. Live. Unveiled in May by the owners of Wokcano and EMC Seafood, Triple 8 is a Chinese bar and grill with classics like Kobe beef porridge ($22) and sparkling blueberry sake ($10).