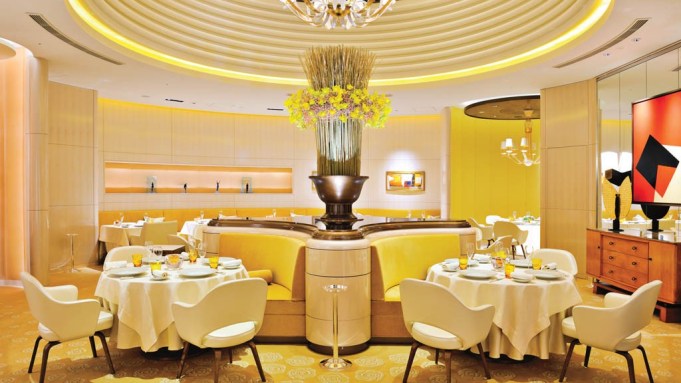 Shiseido’s L’Osier restaurant, a highly praised 40-year-old establishment, is moving into a new era under the tutelage of a young chef.

Olivier Chaignon, a 34-year-old hailing from Montargis in the Loiret region of France, has taken over L’Osier’s kitchen from Bruno Menard as the eatery reopens its doors after a two-and-a-half-year hiatus from Tokyo’s fine-dining scene. The restaurant closed in April 2011 after snagging three Michelin stars for three consecutive years. Shiseido subsequently redeveloped the site, reopening it in late October as part of its new multipurpose building in Ginza. Architect Pierre-Yves Rochon gave the dining room a complete face lift, creating an airy, circular space featuring a massive gold-accented chandelier and yellow furnishings.

It’s clear that Chaignon is under considerable pressure—Japan’s culinary landscape is highly scrutinized, especially now that the country can claim more Michelin three-star restaurants than France. What’s more, over its four decades of existence, L’Osier has cultivated a loyal client base of well-heeled ladies who lunch and business people flush with generous expense accounts (lunch menus start at about $100 and a deluxe tasting menu for dinner runs as high as $385). The restaurant, which seats 36 people in the main dining area and another 10 in a private salon, is almost completely booked through the end of January.

But Chaignon, who most recently worked as executive chef at Pierre Gagnaire at ANA InterContinental Tokyo, appears to be taking his responsibilities in stride. “I’m feeling well,” he quips a few days before L’Osier’s official opening. Chaignon has already hooked at least one fan—and a rather important one. Shiseido chairman, president and chief executive Shinzo Maeda sampled the chef’s Parmesan risotto topped with a scallop mousse and slices of white truffles from Alba as part of a recent meal. “All five of my senses were totally satisfied,” the executive said.

The soft-spoken chef’s chief mission is to keep his diners satiated with his Japanese-influenced take on classic French fare with “something special on the side.” One dish from the current menu features two rectangular slabs of pan-fried beef with a red wine sauce and a selection of spinach leaves, one topped with a mixture of preserved onions and parsley chlorophyll and another with a combination of red cabbage puree and pomegranate syrup. A bone-marrow mousse with a few crispy spiral potato chips accompanies the plate.

Having worked in Tokyo since 2005, Chaignon has had plenty of time to develop an appreciation for Japanese cuisine firsthand but he is also quick to point out that Japanese cooking—particularly its small, artful and delicate portions—has had a broader influence on the French culinary scene. “Really, the Japanese [traditionally have been] making dishes that are very refined, well presented. French cuisine was about hearty food,” he says. “Now in France, we’re borrowing a bit from the Japanese way.”