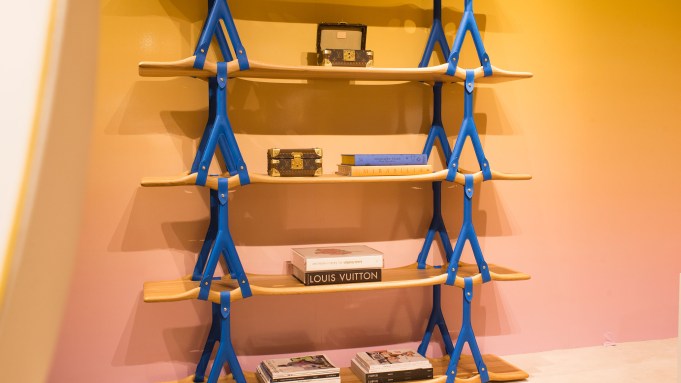 Three years ago, the San Francisco-based artist and designer Andrew Kudless was in Miami for an installation he had done for Perrier-Jouët, which was conveniently stationed a hundred or so feet away from the Louis Vuitton Objets Nomades set up. During the Design Miami fair he found himself repeatedly wandering over to check out the Tokujin Yoshioka-designed Blossom stool and Campana Brothers hanging fur cocoon, 2016’s collection additions, and eventually struck up a conversation with the Louis Vuitton team.

“I didn’t know if anything would come from it, and then about six months ago, maybe nine months ago, [they] contacted me,” Kudless says, on the phone from California ahead of his journey down to Miami. “They were interested in having some proposals from me for the collection and it just kind of went on from there.”

This week at Design Miami and in the brand’s Design District store, Kudless will debut “Swell Wave,” a set of three shelves he has designed for the Objets Nomades collection. He is the first American designer within the collection.

“As you might guess from Louis Vuitton, they have a very strong aesthetic and very strong idea about what they want in the collection,” Kudless says. “In some ways [that was] difficult but also creatively, really exciting for me…sometimes you work with a client where they don’t really know what they want, and it’s not really a collaboration then, in a way. You’re just off on your own doing something, which on the one hand is exciting, but there’s not a tension there. But working with Louis Vuitton, they have such a strong sense of their brand and what’s coming next. They were really pushing me to produce something that hadn’t been done before.”

Kudless began by researching the collection’s history, throughout which he’s noticed a shift from practical travel pieces to those of a more conceptual nature.

“Less of an actual travel of something that needs to fold up and become small, and more of a flexibility and a spirit of movement, in a way,” he says. “I was more interested in where the collection was going.”

He also looked for any holes in the existing collection, and noticed an absence of any kind of bookcase/shelving unit.

“The thinness of the straps, and how they are pulling the wood almost. That the wood is bending under that weight, under that tension. It was one of the initial ideas: I wanted the piece to feel very dynamic,” Kudless says. “It didn’t have to literally be moving, or being packed up and moved from place to place. But just looking at the piece, there was a sense of dynamic tension between the straps and the stronger wooden shelves themselves.”

His design, then, is meant to capture a sense of tension, to mimic the sensations of travel Kudless experiences, both good and bad.

“On one hand, travel is incredibly inspiring. It’s invigorating, exciting. It’s inspiring to me that I travel around the world and I see new things, that lead to new work and new creative ideas,” Kudless says. “But at the same time, there’s an inertia to just staying in one place, also. It’s just all the delays, and the waiting, and the jet lag…you often feel like you’re in two places at the same time sometimes. That your body hasn’t caught up with you. It’s sometimes difficult to be in a new place and to not have the safety or security of home, in a way.”

He also was inspired conceptually by his home base of California, and though he himself is not a surfer, invoked surf culture into his design.

“You just hear [people] talking about, ‘Oh, there’s a swell coming.’ Just thinking about what a swell is: that either can be things happening, storms thousands or tens of thousands of miles away that then travel and make waves here. There could be a storm in Indonesia that then, a week later, is affecting how surfers are experiencing the beach here,” Kudless says. “That idea that you might be staying in the same place but the world around you is moving.”

Kudless, who is also an associate professor of architecture at the California College of the Arts in San Francisco, works in a variety of fields ranging in scale from drawings and paintings to furniture to projects for large architecture and landscape firms. Instead of maintaining a focus like most architects might — on housing or museums, for example — Kudless says his interests are more diversified.

“I’m much more interested in the relationship between material and form, and the way things are made, the fabrication of things. I think that extends across all scales, not just within the design world, but also the biologic and geologic,” he says. “I’m just fascinated by the way anything comes into the world, a mountain or an organism or a building or a piece of furniture. The way that the integration of the materials that it’s made out of, the form that it has, and the forces that are acting on that object make it into that.”

He was especially interested to learn the history of Louis Vuitton, the man, and his commitment to well-made, functional trunks.

“By really mastering a craft and really understanding the tools and the materials of the trade. And then building that. It was just really inspiring to me as a young designer,” Kudless says. “He put the function and the integration of the form and the performance of these trunks first. I always appreciate really well-made things and everyone knows Louis Vuitton for being well made.”

The shelves of “Swell Wave” are made from polished oak, suspended by straps made of Louis Vuitton leather. The design is done in two versions: one that requires two wall attachments, and one free-standing, with a metal frame covered in LV leather.

“Even though you might be stable, everything else around you is changing – and that’s almost a form of travel in itself,” Kudless says.