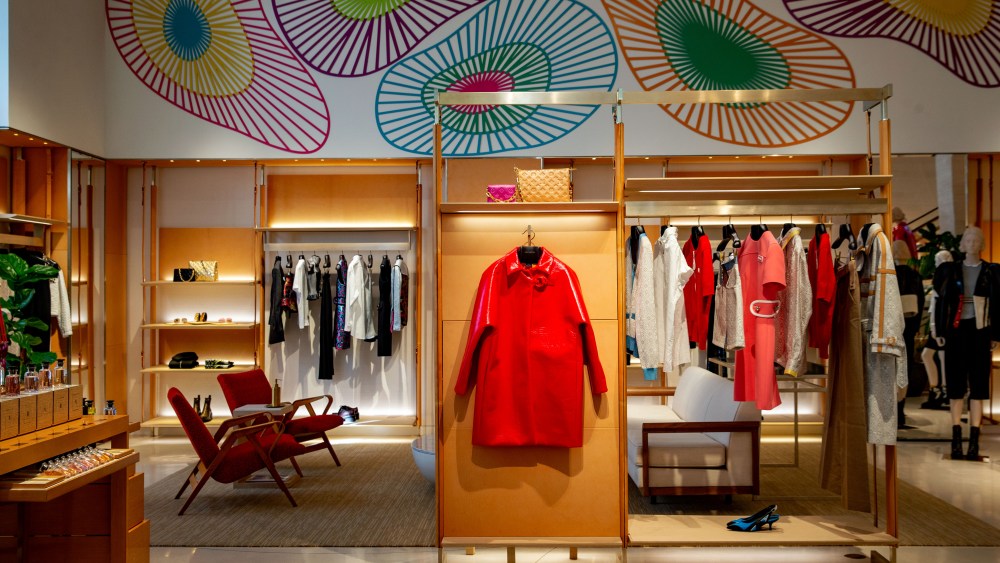 Alongside unveiling their first U.S. men’s store and honoring Virgil Abloh with a reprise spring 2022 show on Tuesday, Louis Vuitton showcased its latest Objets Nomades designs. On Wednesday the brand welcomed Patricia Urquiola, an architect and creative director of Cassina; Humberto Campana, the famed Brazilian designer who has long worked with Objets Nomades, and Gabriele Chiave of Marcel Wanders for a conversation with Tom Delavan, design and interiors director of T Magazine, inside the women’s store in Miami’s Design District.

Chiave has created a petal chair for Louis Vuitton, which was on display in bright green and which, yes, resembles a flower petal.

“The name shows why it’s called the petal chair, of course,” Chiave said. “It’s inspired by a beautiful flower that grows from the ground and blossoms with the petals. It’s also inspired by the flower of the monogram of Vuitton, which is being taken and being readjusted. It is a chair, but in the beginning it was meant to be a branch that grows and it’s this petal that holds you not just as a chair but as a table, as a stool. It would be a landscape of petals. So that was a bit crazy, a bit too large, so we started with a little chair. And perhaps we’ll get the rest.”

He continued that he was inspired by the Vuitton legacy of travel goods that were built to last lifetimes.

“These pieces are pieces that have to last for hundreds of years. If you remember, Vuitton was not a fashion brand, Vuitton was a product brand. They did trunks, they did objects,” Chiave said. “So we can think of this object today as very near to that beautiful quality of items that people would keep forever, would love forever, would collect and keep in their homes.”

“I came up with the idea to do something about a curtain,” said Campana of his contribution, motioning to the pieces that hung on the wall above. Made in the shape of an avocado, the original was made in leather, while the ones on display in the store are aluminum. “Something that could create rooms whilst hanging from the ceiling. And I like the transparency, something that doesn’t block the visual but that transports the visual,” he added.

The project took two years to complete, and he said was a learning curve the entire way through.

“For me, working with Louis Vuitton is like getting an MBA, because I learn, me and my team,” he said.

Urquiola’s installation takes over the entire top floor of the boutique.

“My relationship with Vuitton is from 2007,” she said. “It’s an interesting conversation, that is what I like.”

She started working on the installation during the pandemic, from what was originally a project for Louis Vuitton jewelry. “The conversation began in the middle of lockdown, that they were needing a more open attitude to a corner for jewels,” she said. “That was another department, but inside the company. But then we had some conversations, and then they came and said ‘we like your idea of a sun coming into a room, and then it becomes part of it and the concept of time, why don’t we reapply to Miami?’ It’s very easy how things happen.’”

“With Vuitton, there are not a lot of no’s,” Campana said. “That is the good thing.”