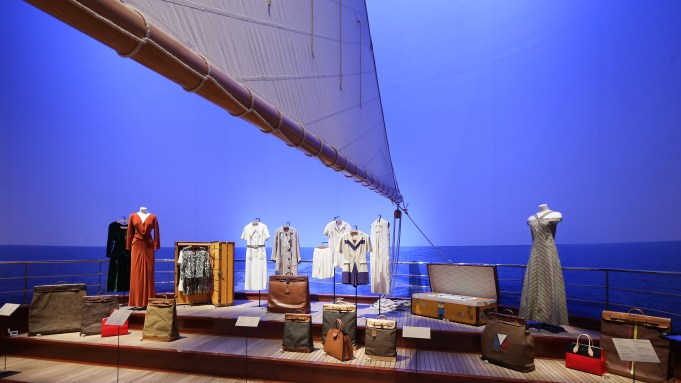 When Louis Vuitton launched its “Volez, Voguez, Voyagez” exhibition in 2015 at the Grand Palais in Paris, the company always intended for the retrospective to travel. In the time since, the exhibition detailing the history of the French trunk maker has made stops in Tokyo and Seoul.

Yet, according to chief executive officer of Louis Vuitton, Michael Burke, it was always destined for the former American Stock Exchange building in lower Manhattan, where it has set up shop from now through Jan. 7.

“This was not available; we waited for this to be available. We wanted to do it in this venue,” explained Burke on a walk through of the space before its Thursday evening opening. “[In the] 19th century, our biggest client base was American. The world’s fair in 1893 in Chicago, the Yukon fair in 1904, our first distributer was John Wanamaker in 1898 — it was all 19th century. This is when America was becoming a country — industrialization, raising money, building factories, zillions of immigrants coming — and that’s when Vuitton became global. Up until then it was French.”

“I like this idea of a building that was devoted to stock exchange, which is totally abstract today,” said the exhibition’s curator, Olivier Saillard. “Inside this building from the Thirties, suddenly we have all these trends, all these costumes, all these accessories, from the 19th century to today, which are not abstract. Facing this [building] there is a cemetery — so it’s quite metaphorical of life.”

The exhibition, which is roughly 80 percent the same as what was on display at the Paris original, narrates the brand’s 160-year history of trunks and travel items.

“The other places we’ve been in have been almost entirely been very large spaces for exhibitions; here, the route, in order to fit it into this extraordinary building, the way in which you go from one space to the other is rather different,” said the exhibition’s artistic director and set designer Robert Carsen. “I think what’s great is on the journey, you can become quite lost in these spaces.”

The New York version remains free to the public, and got the high-tech, social media treatment. Visitors are encouraged to download the Volez, Voguez, Voyagez app, which allows them to virtually tag a subway wall at the exhibition’s entrance, view other messages, and have their note saved by Vuitton.

As with the others, the exhibition opens with the wood room, showing the earliest trunks, including the first trunk that “starts to look like a Vuitton,” an 1886 striped trunk, and the start of monogramming at the house, which began in 1896 as a way to memorialize the death of Louis Vuitton’s father, in 1893.

Delving so thoroughly into the archives, at a time when many brands are focused on a forward vision, is in fact a modern way of thinking, according to Burke. “The more the digital world takes over, the more the manual and physical world that remains becomes important,” he said. “It’s that simple.”

The height of the stock exchange building accommodates the soaring sailboat mast that stood in the Paris exhibition. The room is filled with variations on the steamer bag, which was for dirty laundry and of which Burke says “everything started with this bag.” Two suitcases and a bag done in 2006 for Wes Anderson’s film “Darjeeling Limited” are on display, as is an Azzedine Alaïa designed bag from 1996 and a 1929 trunk once belonging to Albert Kahn, among others.

The automobile room features Burke’s favorite trunk, a 1916 cobalt blue monogram car trunk, along with the house’s early advertisements, including an American Vogue ad from July 20, 1924. The blue trunk was only discovered years after Vuitton’s collaboration with Japanese artist Takashi Murakami, who introduced a multi-color monogram that was a bonanza at retail.

New also is a display of all the awards won by Louis Vuitton in the late 19th and early 20th centuries, from various fairs in Chicago, Tulsa, the Yukon and Vancouver. A whittled down selection of client cards have been carried over, including those from Hubert Givenchy, Christian Dior, Yves Saint Laurent and Elsa Schiaparelli. Rather fittingly for 2017 in New York, a 1927 hat trunk from Marjorie Merriweather Post, the family responsible for building Mar-a-Lago in Palm Beach, is on display. There is also a monogrammed hat box that belonged to Diana Vreeland and collection of alligator luggage belonging to the Woolworth family, one requiring a beast of at least 20 feet in length, according to Burke’s estimation.

Running in tandem to the exhibition are two retail concepts, on opposite ends of the financial spectrum. Opening today and running through March, a pop-up store at Brookfield Place allows customers to design their own bag and personalize it with patches and accessories. Up on the 82nd floor of the Four Seasons hotel, Objets Nomades and hard-sided products are available for custom order over the next two weeks, as part of a roaming series the brand has done with much success in various international capitals.

“In two to three weeks it’s going to do the business that other stores do in a year,” Burke said of the concept, purchases from which are roughly 90 percent made to order. Their most successful iteration to date in the three years they’ve been offering such a service was in Beijing last year, where 100 trunks were sold every day for six days. Demand for customization of this level has driven the company to pursue a second bespoke workshop in Asnières, a suburb of Paris.

Customers have ordered trunks to accommodate watch collections, bartending tools, and casino playthings. Burke noted one client ordered a trunk to store her 36 mini trunk bags, a hit style Ghesquière introduced with his first collection in 2014.

The customized trunk experience is not advertised but done through client advisers, much like their approach to selling high jewelry, which Burke noted is “on fire.” “These clients don’t want this to be seen in public,” he said.

“The less you see it, the more valuable it becomes. The more people buy on the internet, the more what they don’t buy on the internet becomes desirable,” Burke said, citing the success of Vuitton’s recent Supreme collaboration as an example, which was not sold online. As reported, sources said the project generated revenues of 100 million euros.

The “Volez, Voguez, Voyagez” venture is expected to draw close to 400,000 or 500,000 visitors throughout the exhibition’s run in New York. They exit through a gift shop stocking perfumes, travel guides, notebooks and the like.

Trains, Planes and Automobiles: Vuitton Decodes Its History in Paris

Vuitton Trunk Exhibition to Set Down in Tokyo