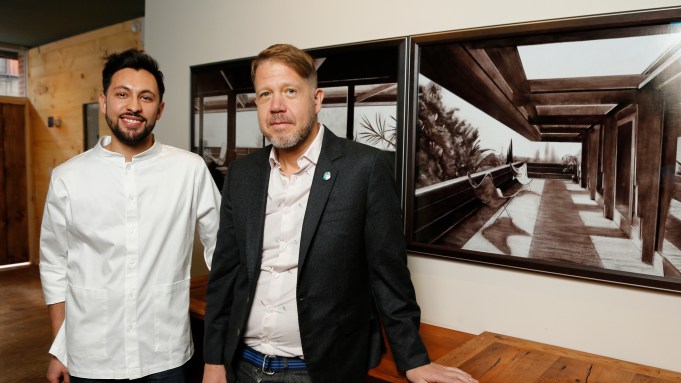 The Lower East Side has a new lowlife — but this one is likely to be embraced by its downtown community.

“It started with a name,” Hugh Crickmore explains of his newest restaurant, which is opening on Stanton Street — Lowlife being the title of both the Luc Sante-penned book about New York and of a post-punk album by New Order. Opening Monday, Lowlife is also a debut for chef Alex Leonard, who hails from the Bushwick culinary metopia Blanca, where he was chef de cuisine. (Blanca is located inside pizza mecca Roberta’s.)

“A mutual friend introduced us in June,” says Leonard the weekend before opening. “The [New York Times] review for Blanca came out and I think two days later he texted me, ‘Hi I got your number from this person’ — not going to say who — ‘it’d be cool to meet.'” Crickmore was hoping to poach Leonard for a new restaurant project, and offered him the opportunity to develop his own menu concept. Leonard initially turned down the offer — for four days — before jumping on board. “Either I can play it safe, or I can take a risk,” Leonard says of the change of heart. Blanca had already snapped up three stars from the New York Times and two Michelin stars. “I really had a good intuition about Hugh. He’s given me almost, like, complete freedom. It’s very rare, especially in a city like this.”

“I’ve never even eaten at Blanca, that’s the crazy thing,” Crickmore divulges of recruiting Leonard. “Everything for me is instinct.”

The menu at Lowlife bills itself as “new American,” a term that manifests itself through simplified dishes such as fluke with smoked dashi and a minimalist borscht with raw cream and trout roe. The ingredients also connect unique attention to the history of the Lower East Side. “Alex, I think, was instinctively coming up with certain dishes — I was thinking he was doing these deliberately,” Crickmore says, pointing to the borscht as an example. “I think sometimes when you’re in a certain zone it influences where you’re going.”

The 70-seat restaurant is housed in a former tenement factory, and the space retains its industrial charm alongside modernized touches. The tables and a few of the walls are made from reclaimed wood, and the chairs are Jens Risom done in nylon. Lithographs by Crickmore’s artist friends provide minimalist decoration as the dining room opens up into a lofted space with a brick-backed bar and chef’s counter.

“Fine dining but very accessible, that’s sort of our goal,” Crickmore summarizes. “That kind of contradiction between high and low. This is such a culture-driven neighborhood, and it’s still one of the few neighborhoods in New York that still feels like New York in the old way.”

And what’s New York dining without a new restaurant?