These three acts rule the night in Brooklyn, East London, and beyond. 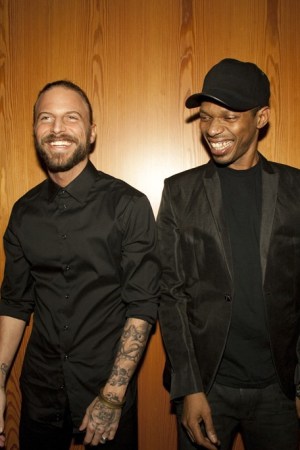 Deep and sultry, light and playful, or dark, druggy, and despondent—the versatility of house music has seen it buck trends to remain the staple sound of clubland. But in a genre teeming with legends, skill will only get you so far. With a flamboyant sense of style and personality to match, Seth Troxler is the archetypal modern-day house hero: an electronic music celebrity with ample underground support. Meanwhile, Canadian duo Art Department have experienced a meteoric rise to the top. And then there’s Clarian, whose indie and pop roots have helped him go against the grain. Recently, all three artists performed in New York for a label launch party sponsored by Emporio Armani Sounds.

This story first appeared in the December 9, 2014 issue of WWD. Subscribe Today.

Clarian North started making music as a teenager, playing in bands long before he was spinning records. The Montreal native has toured the world and racked up a series of releases, either as Clarian or part of the duo Footprintz, but his carefree, free-form approach hasn’t changed. Footprintz began innocuously enough as weekend jam sessions with friend and partner Addy Weitzman. Some years later, they took their basement ritual into the studio, resulting in the 2011 New Wave single “Utopia.” Several follow-ups paved the way to Escape Yourself, the duo’s ’80s pop-inspired debut album. But by the time of its official release, the pair had parted ways. North has since been expanding his solo Clarian project. After spells in L.A. with Tel Aviv dance music giant Guy Gerber and in Chicago with Visionquest’s Lee Curtiss, North has taken his sparkling brand of house to a number of labels, including Seth Troxler’s Soft Touch Records—which North stylistically helms as A&R manager—and Play It Say It.

Before coming together in 2009, Toronto’s Jonny White and Kenny Glasgow were leading successful careers of their own. Glasgow’s can be traced back to the late ’80s and the city’s wild warehouse scene of the time. He released a number of records throughout the ’90s before abandoning production altogether. It was actually White who coaxed Glasgow back into the studio, putting out the veteran’s debut album, Taste of the Low Life, on his own No.19 Music label. Around the same time, they started working together on a live performance-based project, with Glasgow supplying vocals. Art Department was the result. Their breakthrough single, the sludgy anthem “Without You” for cult British label Crosstown Rebels, was a hit before it had even reached the shops. The following year they dropped their debut album, The Drawing Board, to equal acclaim. They’ve been on an aggressive trot around the globe ever since, headlining festivals and bringing their own Social Experiment club nights to venues worldwide—pausing long enough to put together their second album, Natural Selection, which landed in the fall.

Seth Troxler was DJing at age 16 in the suburbs of Detroit while also working in the Melodies & Memories record store. In 2008 he moved to Berlin, where he started the record label and collective Visionquest with Detroit friends and DJs Ryan Crosson, Shaun Reeves, and Lee Curtiss. Their sexy, spiritual take on house and techno went on to dominate the after-hours club scene, from their base at Club der Visionäre in Berlin to Fabric in London and beyond. Simultaneously, Troxler’s solo career was taking off. He drew a devoted following with residencies at DC-10 in Ibiza, Trouw in Amsterdam, and Output in Brooklyn. At the end of 2013, he left Visionquest completely. He has since launched two new labels and collaborated with the likes of soulful house siblings the Martinez Brothers and Deetron, one of Switzerland’s veteran techno artists. He has even stretched out into gastronomy to set up a series of pop-up restaurants in East London.