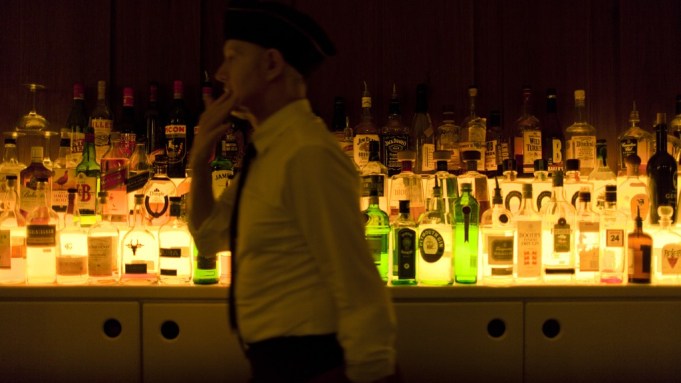 While visiting Berlin, the American traveler will do well not to broach the topic of secrets.

Recently, the CIA’s station chief in Berlin was forced to resign after Chancellor Angela Merkel’s government found out there were active American operatives inside the German intelligence apparatus. And less than a year ago, Edward Snowden’s leaks revealed the U.S. was tapping Merkel’s cell phone. Privacy is a sticking point between the Americans and the Germans. Germans see it as an inalienable right. Americans see it as a seldom-clicked tab on their Facebook settings.

This sense of privacy is coded into Berlin. A seemingly incoherent jigsaw of different eras (Weimar, the Third Reich, the Wall), Berlin is not a city that offers up the goods so easily. It’s a city of Innenhöfe, interior courtyards, and it can feel unbearable and closed. A friend who visited me here recently, from Los Angeles, tapped out a message from his phone while traipsing around Alexanderplatz—the enormous post-Soviet void at the center of the city, Berlin’s dystopian answer to Times Square—asking, Where is everything I heard about? Where is the party? So even if Berlin seems like an über-hip European capital, at times a victim of its own hype, knowing a few secrets is essential to not feeling like you’re in the dark. Here, a guide to some of the city’s hidden offerings.

Everyone knows Berlin is a techno capital—most travelers have heard of the club Berghain—but a more refined way to immerse oneself in the city’s music culture is browsing the record store Hard Wax (Paul-Lincke-Ufer 44A). Tucked into the courtyard of a building along one of the canals in Kreuzberg, the store is connected to Berghain’s record label, Ostgut Ton, and it’s where the best vinyl in the city is to be had.

Also hidden from the street is Andreas Murkudis (Potsdamer Straße 81E), the most stylish place to shop in the city, a rigorously curated concept store housed in the printing-press space of a former newspaper building. From there, you can take a walk in search of the Führerbunker (Voßstraße), the underground shelter where the Third Reich came to an end and Hitler took his own life—the site is very subtly marked, as most Fascist relics have been erased from the city—or just cross the street to the Victoria Bar (Potsdamer Straße 102), the quintessential West Berlin cocktail spot, complete with cantankerous West Berlin bartenders.

In the East, a good drink can be had next door to a police station at the edge of Berlin Mitte, opposite a park, behind a plain storefront. After 8 p.m., ring the doorbell to enter the speakeasy Buck and Breck (Brunnenstraße 177). This inner sanctum hosts just over a dozen seats and a cocktail menu stocked with stiff drinks, like the Sun Ra: mescal, egg fizz, orgeat, lime, triple sec.

Berlin is a city for music and drinking, yes, but it is also a city with a vast offering of green space. Even in Neukölln, a neighborhood associated with David Bowie and still popular among “new Berliners” (whom locals dismissively call the “swarms of young bushy-taileds”), there are two off-the-beaten-path opportunities for repose: the so-called philosopher’s garden, which is dedicated to John Amos Comenius, the seventeenth-century scholar and father of modern education (Comenius-Garten, Richardstraße 35), and the neo-Baroque Körnerpark (Schierker Straße 8), which includes a gallery and café, as well as fountains and a flower garden that rise, like a secret oasis, out of an otherwise rundown neighborhood.

Another secret garden is the Thai Meadow at the Preußenpark, in Wilmersdorf (U-Bahn Konstanzerstraße or Fehrbelliner Platz), a black market where homemade Thai food—fried baby crabs, papaya salad, and spring rolls—is sold off blankets in the field at the center of the park every day, but most actively on the weekend.

For a sense of history in the city, visit the former Stasi prison at Hohenschönhausen (Genslerstraße 66), now a memorial where former inmates lead some of the tours. On the other side of Cold War history and the other side of Berlin, in the West, perched on a crag above the Grunewald Forest, is the Teufelsberg listening station (Teufelsseechaussee 10), which was used by American intelligence operatives, starting at the end of the 1950s, to listen in on Eastern chatter. The ruins, which sit on a hill composed of rubble collected after World War Two, is also the scene of art exhibitions.

Since the end of the Cold War, Germany at large and Berlin specifically have had to do a lot of soul-searching. At least the capital has relaunched itself in recent decades as a city for art and artists. Its galleries reveal themselves on the streets around Mitte, but nothing compares to the Sammlung Hoffmann (Sophienstraße 21), an august and private art collection kept on the upper floors of a former sewing-machine factory in the city center. The Saturday tour takes visitors through the collector’s residence, where selected works hang.

Speaking of private residences, Merkel doesn’t live in the residence at the Chancellery, opposite the German parliament, but, instead, in a regular Berlin apartment building (Am Kupfergraben 6) on the city’s Museum Island, right across the street from the Pergamon Museum. A stark contrast to, say, the White House, the only obvious security here is a pair of police officers who stand casually near the front door at all hours. Some secrets are best kept right out in the open.

My favorite place for dinner in Berlin, for example, is Felix Austria (Bergmannstraße 26). Facing an attractive square, the café, with tables outside in warm-weather months, serves hearty food, wines, and beer from Austria and the German-speaking world, with very fresh, and often organic, ingredients to combat the German kitchen’s intrinsic heaviness.