M: The Clothes Make the Character

“Today's man is much more interested in fashion, and TV characters reflect that right back to us,” said veteran costume designer Juliet Polcsa. 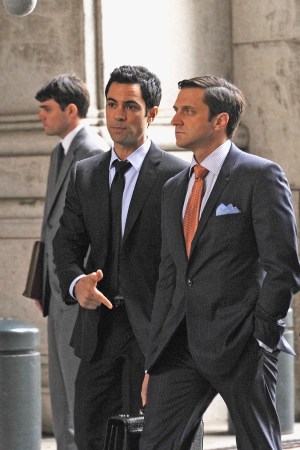 “Today’s man is much more interested in fashion, and TV characters reflect that right back to us,” said veteran costume designer Juliet Polcsa, whose portfolio of work includes HBO’s The Sopranos.

Think about it. How can the lawyers of USA’s Suits or the royals of HBO’s Game of Thrones get into character without the right look?

Polcsa’s years in the business have made her very much aware of the pressures to create relevant clothing for ensemble casts. “On the show I am designing currently, NBC’s Law & Order: SVU, the writers asked for a counselor whose mode of dress was just a little bit more interesting than your average lawyer,” she said. “I started dressing Raúl Esparza in slim-cut three-piece suits, colorful shirts and ties, pocket squares, suspenders, patterned socks, and winter coats with Persian-lamb collars—the full men’s sartorial arsenal!”

Another show with clothes as rich as its story lines is HBO’s Boardwalk Empire, with characters dressed by costume designers John Dunn and Lisa Padovani. “I’m very prejudiced, in that I think our show has made a real fashion impact,” Padovani said. “I’ve even seen a few boaters on young men, and collar-band shirts with braces have also been spotted. We manufacture our suits at Martin Greenfield Clothiers, in Brooklyn, and some of the smaller houses, like Band of Outsiders and Freemans, were seeing our suits and riffing on them. I was really surprised when I saw a Bergdorf Goodman men’s catalog during season two. The suit fabrics were very similar, and the styling was also reminiscent of the twenties.”

As evidence, Padovani mentioned the return of the four-button double-breasted suit. “They always say that imitation is the sincerest form of flattery,” she said, “so we are delighted that the show has made such a positive impact.”