Taking stock of Roth Unbound, a companion to the works of the greatest American novelist. 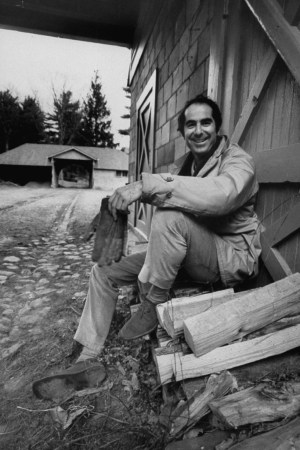 One of my favorite Philip Roth scenes comes toward the end of American Pastoral, when Swede Levov’s father, a Jewish-American from Newark, and Levov’s wife’s father, an Irish-American from nearby Elizabeth, neither of whom loves that his child intermarried, bond over the good old days, their commonalities superseding their differences. It is warm and doesn’t need to say anything: Unlike the roughly contemporaneous American novelists to whom Roth is most often compared—Saul Bellow, Norman Mailer, and John Updike—Roth places his chips not on the grandeur of his ideas or the style of his prose, but on the story and on the stuff of life. And it is a microcosm for Roth’s method, which is to stick to people from the old neighborhood in ways that invite universal identification. He writes what he knows, the reader supplies what he knows, and the commonalities supersede the differences.

But it is precisely because Roth, in his fiction, unapologetically draws on his own life that Claudia Roth Pierpont, a staff writer at The New Yorker and no relation, has basically consigned herself to failure with Roth Unbound: A Writer and His Books (Farrar, Straus and Giroux). How could she come anywhere near the truths, half-truths, and lies Roth has told us about himself, his fictional stand-ins Zuckerman and Kepesh and Tarnopol and, indeed, “Philip Roth”? (When Roth published an open letter to Wikipedia last year, it was like something out of a Roth novel, complete with its opening sentence: “Dear Wikipedia, I am Philip Roth.”) How could she compete with the scene in Zuckerman Unbound in which Zuckerman is asked, of his best-selling novel Carnovsky (a fictionalized version of Portnoy’s Complaint), “Hey, you do all that stuff in that book?”

Like an escaped prisoner pouring nails on the road behind him, Roth has already made it impossible to catch up to his own virtuosic, career-defining answer to that question (although, for the record, Pierpont reports that young Roth used a cardboard toilet-paper roll lined with Vaseline).

It doesn’t help that Roth Unbound is not a biography, but rather notes of steady chronological reading. The summaries of each book pile up so that the whole thing feels like one of those digests describing the reigns of every Roman emperor—becalming or tedious, depending upon your mood. Making matters still more challenging, Pierpont is an immense admirer, as well as a friend, of Roth. The author has even inducted her into the rotating cast of close acquaintances to whom he sends manuscripts for early feedback. She frequently follows the bien-pensant line. For instance, on the question of women in his fiction, Pierpont dismisses Vivian Gornick and the early feminist critics, essentially apologizes for Roth’s affairs, and takes at face value his claim that his first wife, a severely unstable woman who blackmailed him into marriage by faking pregnancy, served as what he called “the greatest creative-writing teacher of them all”—an almost psychopathic way to speak of another human being, even a psychopath.

But to dismiss Roth Unbound as hopelessly corrupted would be a mistake. Pierpont’s compromise is our opportunity! She landed interviews, which yield some insight and also wonderful scoops: I hadn’t known that Roth dated Jackie Kennedy in 1964, or that he once met a girlfriend while on line for Schindler’s List (seriously), or that, after 9/11, he displayed a big American flag in his window. (Also: Pierpont believes the retired Roth will write another novel.) She provides a sympathetic account of his oeuvre, filled with supple, attentive readings: Particularly lovely is her observation that a Henry James volume Zuckerman stands on in an early book becomes a thesaurus he uses to prop himself up during sex in a later one.

And Pierpont also is, presumably, giving us Roth as Roth sees himself—more than, say, Blake Bailey will, assuming his planned biography is written without fear or favor. Hers is the canonical interpretation of a canon that seems likely, and rightly, to be esteemed the greatest of the past sixty years.

“I’m fixed forever as what you’ve made me,” Zuckerman tells “Philip Roth” in The Facts (1988). The fixed Roth is a great American writer who happens to be Jewish in much the way he happens to be from Newark. The disastrous first marriage and subsequent psychoanalysis pave the road to Portnoy. He proceeds to build his days around writing, sealing himself off in a Connecticut cabin, “the literary pirate,” as Pierpont puts it, “who carries a bottle of Purell.” Inspired by European writers past and present, he creates Zuckerman and never looks back, by doing nothing but look back. Though he is no postmodernist: “John Barth was a very nice man,” Roth tells Pierpont, “but give me John Updike.”

Updike is the closest Roth Unbound has to a Zuckerman of its own. (“Rabbi, Run,” Roth mischievously suggests, ever positing counter-lives. “Rabbi Redux. Rabbi Is Rich!”) Updike and Roth were born a year apart, broke into the big leagues in the late fifties, scandalized the country in the late sixties, and wrote and wrote and wrote thereafter. They fell out as Updike’s reviews of Roth’s work grew harsher, and stopped speaking after Updike appeared to endorse Roth’s second wife Claire Bloom’s negative portrayal of Roth. Meantime, Roth seems to have supplanted Updike as The New Yorker’s local saint; editor David Remnick even profiled him. At the same time, Pierpont reports that Updike quite likely suggested the link between sixties countercultural radicalism and the Eastern religion of Jainism that forms the heart of American Pastoral.

The contrast with Updike, whose Pennsylvania hometown is barely a hundred miles from Newark yet a world away from Roth’s Newark, suggests a different Roth than the one Roth, Pierpont, and many others have “fixed.” Unlike Updike and the others, Roth is a writer of a fundamentally European sensibility, who came to know America as well as any American, and thereby conveyed us to ourselves as no other American could. Roth might have learned from The Adventures of Augie March how to write with exuberance, but unlike Augie March—and Rabbit Angstrom—Roth’s best characters are mercilessly tied down (“fixed”) to their pasts, their personal histories, their family histories, their ethnocultural histories. This Roth learned from Chekhov and Kafka, and also from the Soviet Bloc writers whom he met in the mid-seventies. (He and Milan Kundera traded the names of Native American tribes while they were in Prague, Roth making up ones such as “the Kreplach.”)

Roth tells Pierpont that these authors revealed to him “a whole side of literature that is muted in the American tradition.” (Roth’s self-awareness, weighty sense of fate and history, and what Pierpont calls “detached relation to realism” are frequently ascribed to his Jewishness, but really they come from Europe’s Jewish-inflected cosmopolitan culture—the culture, in varying ways, of Freud, the New York Intellectuals, and Billy Wilder.) Roth’s pivot is The Ghost Writer (1979), that perfect novella in which he invents a fantastical story—and, ever the storyteller, presents it as just that, a fantastical story, like an old Yiddish tale—of marrying a miraculously living Anne Frank, freeing himself of all claims American Jews might have on him. It is also when he explicitly begins to tell his story through telling Zuckerman’s.

Roth is an American, Newark born. Yet is not Roth also alienated from America? In the ecstatic opening of his 2000 novel, The Human Stain (“…a president’s penis was on everyone’s mind…”), one senses profound understanding but not sympathy. In Remnick’s profile, Roth passes a river and plays the role of knowing local: “Well, o’ course, we got the rivah heah, yessir we do!” He knows the voice, but the voice isn’t his. Only an American could have fashioned the surreal, parable-like cages in which the Americans in the so-called American Trilogy find themselves, but only a non-American sensibility would give them no way out. “The indigenous American berserk” is a phrase no berserk indigenous American could have coined. It even, perhaps, took a peculiar kind of American to give Portnoy his own entry in the DSM. The Raskolnikov of jacking off was brought to us by the Kafka of America.