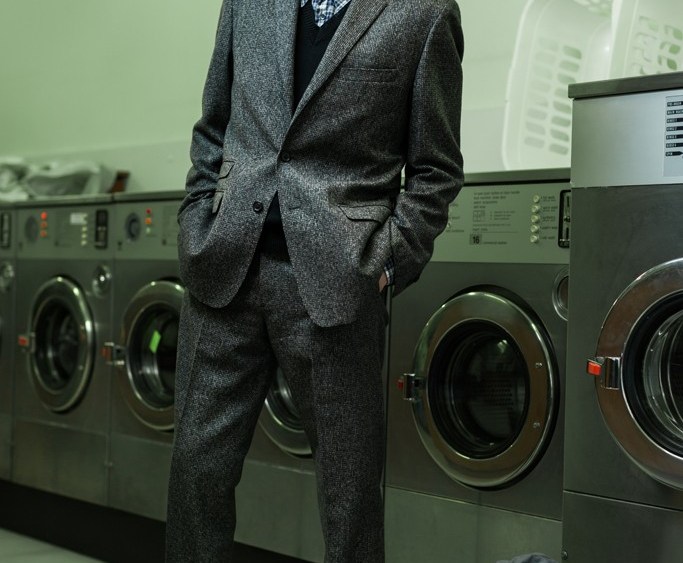 Nick Lowe has managed to age gracefully in an industry that makes a fetish of youth. Maybe his secret lies in not taking himself or his career too seriously. Even at age 64, the singer-songwriter remains on good terms with his muse, unlike the majority of his more overtly ambitious colleagues who, with the exception of Bob Dylan and a few others, seem to lose the creative spark not long after they hit forty.

Over the past twenty years, Lowe has made one casually great album after another, work that is equal to the stuff he turned out in the seventies, when he had a moment in the pop-music sun. In keeping with his easygoing approach to life and art, he is not doing all that much to push his latest release, Quality Street: A Seasonal Selection for All the Family. When I asked what inspired him to make a holiday album, he replied, “I wasn’t inspired to do it at all — I was commissioned to do it by my record company. They called me up and asked me about it, and my initial reaction was snobby and snotty: ‘Oooh, I don’t think that sort of thing is for me! I’m way too arty and farty to soil my hard-won reputation with this sort of vulgar carrying-on!’ It wasn’t until the afternoon of that day that I started thinking about why that was my immediate reaction. And that’s when I thought: No! Sod it! We might — we might — be able to come up with something good that could work on more than one level. And so it turned out to be.”

The son of a Royal Air Force officer who was a veteran of the Second World War, Lowe grew up on military bases and spent his childhood Christmases in places such as Jordan and Cyprus. “It would have been 104 degrees outside,” he said by phone from London, “but it wouldn’t stop us from eating a gigantic Christmas lunch — turkey and potatoes, even though the turkey might possibly come out of a tin. There were three toys — three for the boys and three for the girls — and we all got the same three presents.”

Christmas became a little less wonderful once he was grown up and on the road, back in the days of drinks and drugs. “Everything would be closed,” he said, “and I would spend it in some kind of stupor.” The shows he played at that time of year were hard slogs. So much so that, these days, he avoids the road during holiday season. “It’s impossible, really,” Lowe said. “It’s always a rowdy crowd. They’ve always had too much to drink. You don’t lay any art on them at all. You won’t get thanked for it. You’ve got to keep the beat strong.”

You can hear the mix of seasonal joy and disappointment in the new album, which has three new original songs sprinkled among holiday classics and oddities. One of the new ones, “Christmas at the Airport,” has the Lowe hallmark — an underlying melancholy not quite masked by an easy melody and witty lyrics.

Even Lowe’s most famous songs don’t announce their own greatness. “Cruel to Be Kind,” his hit single from 1979, wraps a Shakespearean allusion in three minutes and thirty-one seconds of pop hooks. (He rerecorded the track, backed by Wilco, last year, during a quick break from the Wilco–Nick Lowe summer tour.) “Heart of the City,” his jovial take on punk’s primitivism, is almost comically simple — if it has more than two chords, it’s hard to tell. In 1974, Lowe came up with a satirical number that has turned out to be something of a pop-rock standard:“(What’s So Funny ’Bout) Peace, Love, and Understanding.” Narrated by an old hip- pie who finds himself at odds with the post-hippie world, it settles on a genuine sentiment that is the key to its staying power. In a less frisky mood, Lowe wrote the plain and bleak “The Beast in Me” especially for Johnny Cash, who recorded the definitive (and first commercially released) version in 1994.

Lowe’s lack of self-importance and his accompanying distaste for the machinations of stardom stretch back to an incident that took place in 1970. The whole thing started when a couple of charming but slightly shady would-be moguls decided that Lowe was their ticket to pop-music riches. As the main singer and song- writer of the band Brinsley Schwarz at the time, Lowe was young, good-looking, and willing enough to play the game. Thinking big, the would- be moguls booked him and his bandmates for an engagement at the Fillmore East, a prime venue in Manhattan’s East Village.

The madcap businessmen went so far as to pack a London-to-New York Aer Lingus Boeing 707 with journalists and contest winners for a weekend spree during which they were to witness the American debut of pop music’s Next Big Thing. But the flight was miserably delayed, and the reporters and critics passed the hours by getting drunk and stoned. After a late arrival, a fleet of twenty-two stretch limousines, hired for the occasion by the would-be moguls and stuffed with the inebriated journalists, battled the traffic all the way from John F. Kennedy International Airport to the club.

Lowe and the boys played in less-than-stellar fashion at the Fillmore, only to be followed by Van Morrison, who blew them off the stage. The journalists soon shed their hangovers and lit into the band and the publicity stunt. A headline in Melody Maker summed up the response: THE BIGGEST HYPE OF ALL TIME. Even the London Sunday Times weighed in with a piece on the dangers of hype. And so the great gambit had backfired, rendering Brinsley Schwarz something of a laughingstock. (You can read the full version of this cau- tionary tale in the book No Sleep Till Canvey Island: The Great Pub Rock Revolution, by Will Birch.)

In reaction to the public failure, Lowe went in the opposite direction. He and his bandmates rented an old house and lived communally over the next few years, much like their heroes in The Band. They toured relentlessly and played regular shows, for a much-reduced fee, in humble London pubs such as the Tally Ho. While other acts of the day were conquering audiences with bombast and flash, Lowe and his bandmates turned down their amps and won a reputation as the quietest group on the circuit. Little by little, they earned back their integrity.

Even with his band today, Lowe favors a low-volume approach. “We’re so into the idea of making stuff swing,” he said. “People may think it’s a bit comedic, but we really like that element. It’s impossible to swing loud. We’re not inaudible, but it’s something you can do only if you can hear one another. It sounds great, to be playing a rock ’n’ roll song kind of quiet.”

Throughout his low-key career—with the exception of his early-seventies communal years, when he went all shaggy—Lowe has maintained an elegant look. And unlike some other rockers of his generation, who hit the stage in tight garments similar to what they wore in their heyday, he now cuts a refined figure when he performs.

“People don’t really take dressing seriously anymore,” he says. “They dress for comfort nowadays, but it’s perfectly possible to dress smartly and be comfortable, without looking like what I describe as ‘dadsy.’ Most of the time, I do try to put in a bit of effort and look well turned out.”

When he was starting in the sixties, before the ill-fated New York jaunt, he was a fashionable young man, indeed. “I was an enthusiastic mod,” he says. “Someone we really admired was [jazz musician] Gerry Mulligan. His look was just fantastic. It was an Ivy League look, polo shirts with three-button collars or a knitted sweater. That kind of garment, worn with loafers. And it was incorporated with a European style—French- and Italian- style suits with thin lapels, slopy shoulders, and not much padding. It took quite a chunk out of your wage packet. I still like it, though. It’s an ageless look. I find I still like that smart, casual look—and now, of course, I can afford to buy clothes of that quality.”

The style matches the man: understated, casually elegant, and immune to passing trends.