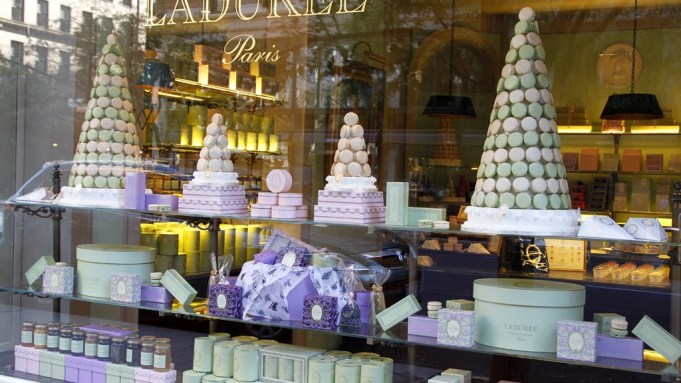 There are a few things that are inescapably, classically and brazenly French: Serge Gainsbourg’s love life; the marinière; an attitude found in certain waiters, and the chic pastry shop Ladurée, a longtime favorite of tourists and Parisians alike. Unluckily for those watching their waistlines pre-fashion week, Ladurée opened the doors of its first outpost in North America on Tuesday.

“Ladurée is exactly the same all over the world, everywhere: Exactly the same French style,” David Holder, the company’s chairman, says. “I want the New Yorkers to feel like they’re in Paris on the Rue Royale in 1862, to feel the same way and have the same dream: what we call ‘le rêve Ladurée.’ Everything is the same. Between New York, Tokyo, Paris. The macarons are made in Paris and shipped overnight. The manager of this New York location is French. Everything has to be like being in Paris. That’s very important to me.”

Having famously perfected the macaron at the beginning of the 20th century by joining two outwardly crisp and inwardly soft shells with ganache, Ladurée sells about 15,000 silver-dollar-size treats daily across Europe and Asia in flavors such as caramel with salted butter, raspberry, pistachio, rose, orange blossom and Madagascar chocolate.

The brand’s first location on the Rue Royale was founded in 1862. The shop is an exercise in tasteful opulence, boasting elegant marble-topped tables and painted antique furniture, gilt chandeliers and a frescoed ceiling, and is the inspiration for the 26 other locations in cities ranging from Milan to Zurich.

Housed in a Madison Avenue boutique on New York’s Upper East Side, the first North American Ladurée is painted in the company’s signature shade of celadon and boasts pyramids of macarons and their painted boxes in the large glass windows. Holder intends to open a proper sit-down salon next, ideally in SoHo, and has further designs on the Meatpacking District.

“New York is a very important city and experience in my life,” he explains. “It’s very important as an extension for Ladurée, because it is a starting point for extending our brand over America. It’s the most important store that I’ve ever opened in the entire world. I’ve been going to New York for more than 30 years. I finally convinced my sister [who manages the Madison Avenue location] and brother-in-law to move here. It’s a family affair.”

Holder expresses no concern about the translation of something so typical to Paris to New York.

“The only American touch that I gave is that to honor the opening I made a new macaron, with raisin and cinnamon,” he says. “When we did the testing of it, you close your eyes and it’s like being in New York. You smell the cinnamon and you can’t help but think of the city. But that’s the only touch.

“Except for that, everything is very, very French.”