Chatting with the star's new stylist about what makes Machine Gun Kelly's style worth paying attention to.

The MTV VMAs are notoriously one of the most chaotic red carpets, style-wise, in the entertainment industry, and Sunday night’s awards had their fair share.

Standing out in the crowd was Machine Gun Kelly, dressed in a shocking pink suit and sleeveless turtleneck look for the red carpet, by Berluti, and later onstage presenting in a bright blue DSquared jumpsuit, looks that were bold but rooted in their classic nature, proving that Machine Gun Kelly is a fashion star on the rise we need to pay attention to.

“He’s a really cool guy and he has such a distinctive style himself — he’s brave and he wears everything with ease,” says his stylist, Adam Ballheim.

“The first time I spoke to him he said he wants to be himself. He’s super cool, he’s super dope, he has a good sense of fashion, but he didn’t want to feel like he was a doll that someone was dressing up,” Ballheim says.

Ballheim, a former assistant to celebrity stylist Erin Walsh with whom he worked on Sarah Jessica Parker, Kerry Washington and Zachary Quinto, has worked as a solo stylist for roughly three years; other clients include Jharrel Jerome, LaKeith Stanfield, Alex Wolff and Padma Lakshmi, his one main female client.

“In general for me, every client is different but in general, being bold but still being classic and classy and elevated is what I always try and do for my clients,” Ballheim says. “I also think it’s very much how, going back to the first conversation I had with Colson when I started working with him, he was like, ‘I don’t want to feel like the clothes are wearing me.’ It should feel like something that he could have thrown on from his closet. I don’t think there was ever a moment with [the VMAs] for him where I was like, ‘OK, I need some crazy over the top Lady Gaga moment’ — that’s just not his vibe. It’s just sort of easy cool.” 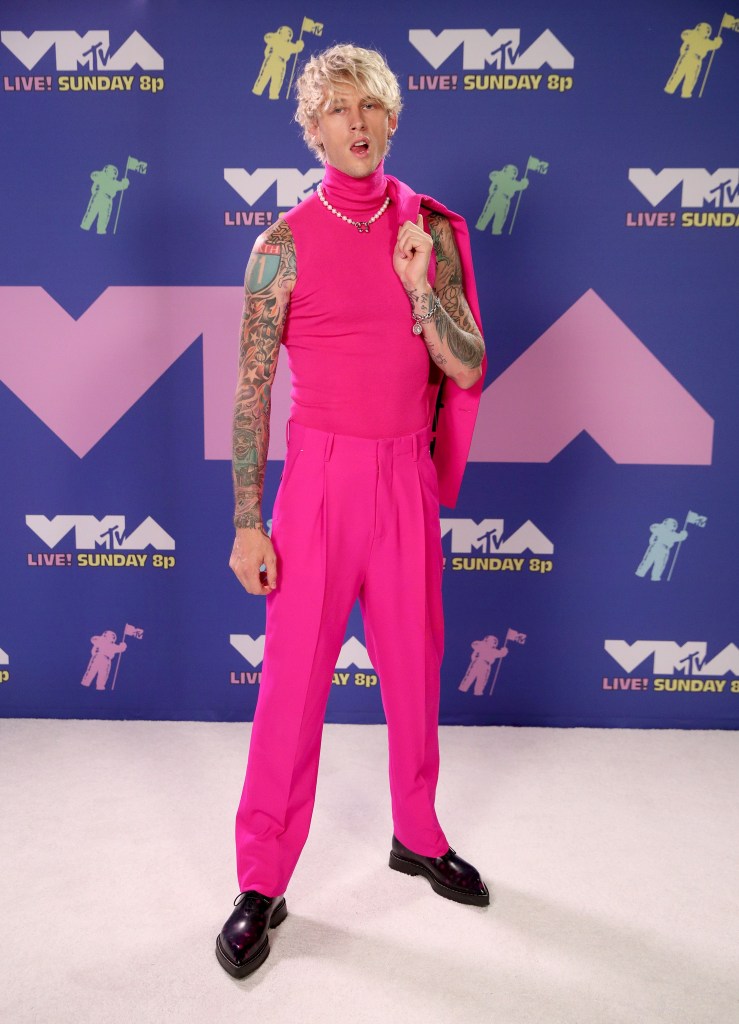 The looks came together in roughly a week: Baker taped his segments for MTV on Friday night, and the pair had their final fitting Thursday. They began the conversation weeks ago, though, with Baker saying he wanted his VMAs appearance to be fashion-forward.

“We started talking about how he wanted to have a really strong fashion moment, that he wanted to really step up the game, so I spent a week figuring out what we could do for him that would fit his personality and vibe,” Ballheim says. “The pink look was the first thing he tried on in the fitting and he was like ‘OK, we’re good, we got this.’”

The Berluti ensemble is actually a few Berluti items pieced together, not one head-to-toe runway look; Ballheim was limited with what he could get his hands on due to shipping delays caused by the pandemic.

“But it was actually kind of kismet,” he says. “Because it wasn’t one of those looks that I saw the full look on the runway and was like, ‘I need that, that’s perfect,’ it was like’ OK, this is what we have to work with, what’s the coolest thing I can do here.’”

The pearl necklace, by AD.iii., is Baker’s own. “He threw on the pink look and then he said something about pearls and I was like ‘Oh, my god pearls would be f–king dope’ and he was like ‘I have it, I have it,’” Ballheim says. “He had actually gotten the necklace the day before or like that week. He was super stoked to wear it.”

The DSquared outfit is a look Ballheim has been in love with for months, but had never found the right client and moment to pair it with.

“It’s been through a couple of fittings with me and it was just never working out, and it luckily happened to be in Los Angeles already and available for us to try and I was like ‘I think this is the moment this suit can finally happen.’”

Though their relationship is new, Ballheim says Baker is definitely one the fashion industry should have their eyes on.

“I think he proved it last night. He is someone that has a very strong sense of fashion, he is someone that dresses differently from your average rock star, movie star, he has a very strong opinion but it’s still very classic, it’s not over the top, it’s not crazy,” Ballheim says. “I think if more people approached fashion that way, I think men’s [red] carpets could be a lot more exciting.”