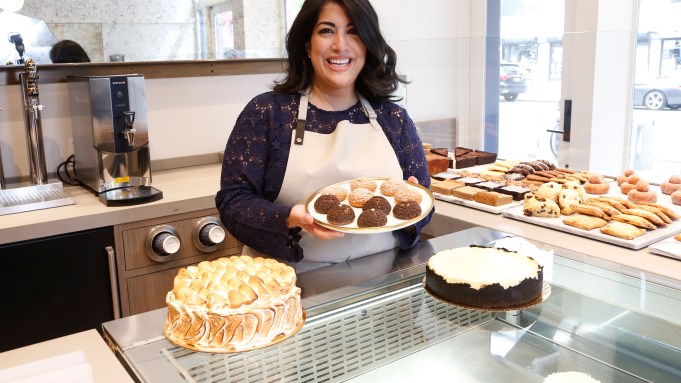 The road from banking to black-and-white cookies is not, on paper, the most linear. But for Umber Ahmad, leaving a career in finance to pursue her love of baking has led to three years of success in online wholesale for her business Mah Ze Dahr, and on Thursday, she and partner Tom Colicchio finally open their first brick-and-mortar shop in Manhattan’s West Village.

Ahmad’s passion for baking stems from a childhood spent atop kitchen counters, listening to a Finnish nanny talk about food. “She would bake and tell stories, and so storytelling and food became inextricably linked as a child,” she says. “Growing up, my parents used to take my sister and me and travel the world — every year we would live part of our summer in a different country. And in every country, the way we would learn about people and culture and what they do and what they care about was through their food.”

Her interest in baking would take a backseat, at least professionally, for several years. Before launching Mah Ze Dahr, which has drawn praise from New York Magazine’s Grub Street and Eater in the past three years of online business, Ahmad was in the finance world. An alum of MIT, she worked at Goldman Sachs prior to cofounding the firm Specialized Capital Management. “We created an investment advisory firm that does a handful of things, one of which is works with businesses to help them think about how to properly capitalize themselves and what the right growth opportunities are for them,” she says. “A lot of that takes the form of working with brands and building them overseas. So we started working with luxury brands, chef-based food brands and restaurant brands, and thought about how do we get them out of the geography they’re currently in and into other ones.”

Through this advising she met Colicchio, the man behind the Gramercy Tavern, among others, who heard through the grapevine that Ahmad loved to cook. “He said to me one day that he wanted to try my food, which I thought was ridiculous — who cooks for Tom Colicchio?” she says. “He makes people cry on TV.”

The risk paid off — after several days of presenting the famed chef with her creations, he asked her what she planned to do with the baking passion. “And I said, ‘I want to create a brand that has a luxury, ubiquitous presence, that will change the way people live their lives, and I want to do it on a global basis,’” she says. “And he said, ‘OK, let’s do it together.’”

Colicchio is now an equity owner and adviser in the Mah Ze Dahr business. “Because I have a banking background and investment background, I knew where I wanted to be long-term,” Ahmad says. “Very often people start businesses and think about where they want to be tomorrow, and what we do in private equity is say ‘what is the ultimate goal of the business,’ and then you work your way back from that.”

Her long-term vision has always extended beyond an online business — and even a physical shop in one of Manhattan’s most desired neighborhoods. “The goal of this business is to be part of a larger luxury conglomerate,” she says. “I would love to be part of an LVMH or a Kering. How do I get myself there?” (That’s not so farfetched since LVMH Moët Hennessy Louis Vuitton bought the famed Cova Caffe in Milan while Prada Group acquired Pasticceria Marchesi.)

Ahmad chose to test her concept in an online model first. “We got to a certain point where we said, ‘OK, this is real, people care, people like what we do.’ We have a greater than 55 percent reorder rate online, which in the online business world it’s kind of unprecedented. So we have great stickiness and affinity for our brand, and we said, “All right, let’s physically be able to present ourselves to the world.’”

The bakery will open with a selection of Mah Ze Dahr staples, though Ahmad notes that the menu is a “living, breathing thing” which will evolve. “A lot of the things that I started to work on were things that I particularly didn’t really like — I never really liked cheesecake, and so I worked on developing a cheesecake recipe that I would love. And so now we have a cheesecake recipe that is very light and has the zest of a lemon, and real vanilla bean in it, and it’s so delicious you just want to devour it.”

The menu, though changing, will not shift into food trends. “Trendy is tough in food — people like to do hybrid pastries, or people like to stack food on top of food inside a glass, and those things are interesting and they make great Instagram, but there isn’t an ability to build a legacy off of it,” she says. “When you think of a luxury brand, they’re not as much about trend as they are about quality craftsmanship.”

The name Mah Ze Dahr is an Urdu word Ahmad felt perfectly captured the hard-to-put-into-words nature of her business. “It’s meant to describe the magic or the essence of something that is special,” she says. “So you eat something really delicious and you’re like, ‘This is so good, I don’t know what it is, but there’s something really special about this.’ There’s a ‘mah ze dahr’ about it — it’s the magic.”