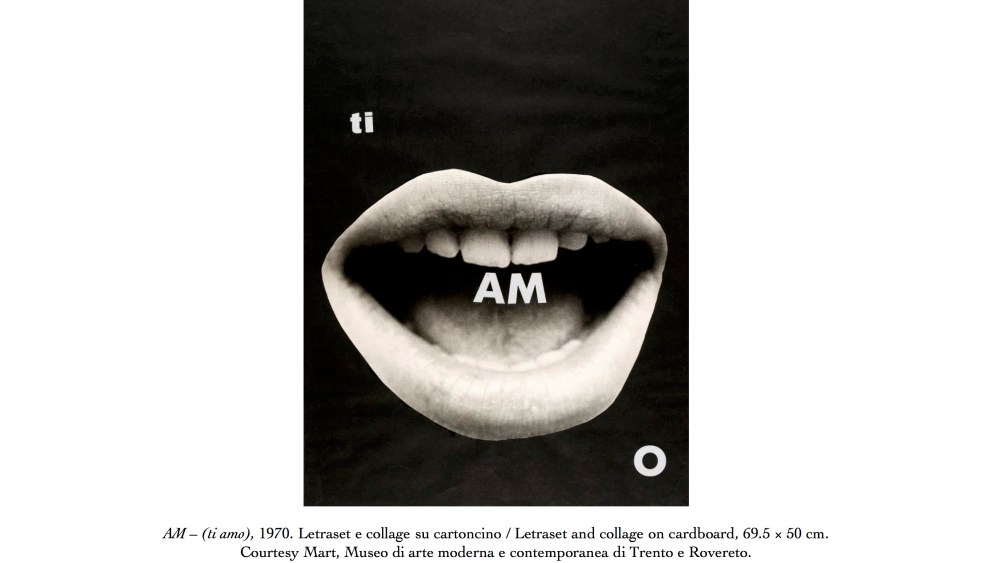 MILAN — It’s actually not so unexpected to see Dior as the sponsor of the exhibition “The Unexpected Subject. 1978 Art and Feminism in Italy.” Nor is it surprising that the luxury brand’s artistic director Maria Grazia Chiuri attended a preview on Wednesday of the exhibition here.

Since her arrival in 2016 at Dior, Chiuri has written a new feminist manifesto. Chiuri has conceived T-shirts emblazoned with “We Should All Be Feminists,” the title of an essay by Nigerian author Chimamanda Ngozi Adichie, and she has striped marinière shirts that say: “Why have there been no great women artists?” — from the art historian Linda Nochlin’s 1971 essay of the same name. She tapped a woman, Brigitte Lacombe, to shoot her first advertising campaign for Dior and highlighted behind-the-scenes talents in a series of videos with the hashtag #thewomenbehindmydress. Her muses include painter Georgia O’Keeffe and Vicki Noble, a feminist shamanic healer and author, and her couture designs shown in July 2017 bore the names of female explorers like Amelia Earhart, Freya Stark and Alexandra David-Néel.

At the preview, Chiuri explained her trajectory. “When I arrived at Dior, everyone talked about the fact that I was the first woman to lead the brand and how Dior was a feminine brand. Both things made me wonder why everyone was so surprised. I realize now that, banally, it has to do with power. I started asking myself what does it mean to be feminine and I started thinking about the body,” said Chiuri, thanking two men, LVMH Moët Hennessy Louis Vuitton chief Bernard Arnault and Dior chief executive officer Pietro Beccari, for their support, also in choosing to sponsor the exhibition.

“The Unexpected Subject. 1978 Art and Feminism in Italy” highlights the relationship between visual arts and the feminist movement in Italy, identifying 1978 as a benchmark. That year, with the exhibition “Materialization of Language,” curated by Mirella Bentivoglio, almost 80 women artists, including Tomaso Binga, Irma Blank, Maria Lai and Lucia Marcucci, among others, showed their works at the Venice Biennale for the first time, in an arena that was very difficult for women to conquer then. That was also the year of the international feminist seminar in Belgrade and the first feminist exhibition in Wroclaw, Poland.

Binga, the Italian artist and poetess Bianca Pucciarelli Menna who took on this pseudonym to make a statement about male privilege, also attended the preview. In February, for Dior’s fall 2019 show, Chiuri displayed in the courtyard of the Rodin Museum a work by Binga spelling out the brand in body language and inside, the entire alphabet series was featured, each letter representing a different kind of woman and where the artist read one of her poems. As Chiuri and Binga easily bantered at the preview, the designer was asked how they met. “It was simple, we both live in Rome and I simply rang her doorbell,” said Chiuri. “I love her irony and how she sends messages with feminine lightness. She is fantastic.”

Chiuri acknowledged that she was 14 in 1978 and that she grew up in a family “that had an open mind. I was taught to be independent, to be educated and successful.” However, she admitted she herself had become “a stereotype, and these artists helped me look inside myself.” She claimed that, still today, “we each must do something” to change women’s situations as “some things have not changed much. Let’s not deny it. I have seen this personally. When I wanted to work with women photographers, because I wanted women to look at other women, it seemed there were no women photographers — come on,” she said, shaking her head. “We must do something about this, you can’t think someone else will do it, take baby steps and do something daily. Fashion is pop, it can help convey a message to an expanded public, also to young people — and I do hope they will come here to see the exhibit. I adore this project. It’s important to give voice to these artists and it’s important that it is in Milan.”

The show will be unveiled to the public at Milan’s FM Center for Contemporary Art starting April 4 and will run until May 26, curated by Marco Scotini and Raffaella Perna. It highlights the centrality of women in the Italian art scene of that period, and their exchanges with the artistic panorama of the time, while criticizing the mainstream view that relegates female artists to a marginal position. Works from around 100 artists that demystify gender stereotypes and printed materials linked to feminist movements, divorce and abortion are on display.