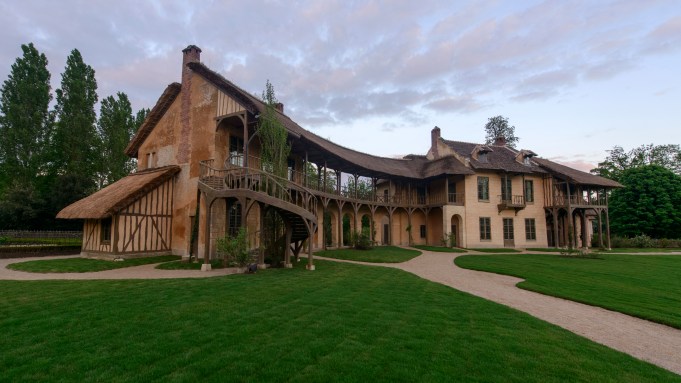 VERSAILLES, France — Bernard Arnault, chairman and chief executive officer of LVMH Moët Hennessy Louis Vuitton, was among the first to get a private tour of the restored Maison de la Reine at the Château de Versailles here, a rustic retreat built for Marie-Antoinette set in the gardens of the Petit Trianon, where she sought refuge from the pressures of court life.

It’s only normal, seeing as Dior was the sponsor of the three-yearlong restoration project, the cost of which was not divulged.

“Nobody has set foot in the Maison de la Reine since 1848. It was closed to the public due to the fragile state of the buildings. It’s a miracle to have found the funding — thanks to the house of Dior — but also through such a wealth of human skills — thanks to French know-how — to be able to rediscover the original atmosphere of the site. To experience it just as Marie-Antoinette had imagined it, even if she only got to enjoy it for two or three years of her life,” said Catherine Pégard, president of the Château de Versailles.

“Who could not be moved by this enchanting country landscape so close to the Versailles, but that could be anywhere — Normandy or England,” continued Pégard, adding that the ill-fated queen created the hamlet in which the building sits as somewhere to escape to — “to get away from rigidity of court life. She wanted somewhere that she could spend time with her friends.…To get away from the strict [Versailles] gardens of Le Nôtre to a more natural landscape inspired by English gardens.”

“She of course upheld her status as the queen, but wanted to show that she was in touch with the times, to distance herself from the oppressiveness of Versailles,” added Pégard.

Louis XVI gifted the Petit Trianon — a three-story neoclassical mini château — to Marie-Antoinette as a wedding present following the death of his grandfather Louis XV, marking the first time in history that a site fell under the ownership of a queen.

Built between the years 1783 and 1787, with architect Richard Mique overseeing the project, the Maison de la Reine, or Queen’s House in English, was the sole construction commissioned by the queen, according to architect Jacques Moulin, France’s director of historic monuments, who gave a tour of the site on Friday.

The Maison de la Reine formed the main house in a hamlet of 11 buildings, five of which were reserved for Marie-Antoinette and her guests.

“She wanted it to resemble a rustic village in Normandy. It was to be somewhere that represented rural society, one that recognized the importance of the farming and agriculture trades for the economy. It was a building that was filled with symbolism. It was less Rousseau-ist, more Physiocrat,” said Moulin, who explained the site has lived through three phases.

The building was transformed by Napoléon Bonaparte at the start of the 19th century — “he added roofs, demolished certain buildings, and redesigned the gardens.” Then in 1930, thanks to funding from John D. Rockefeller, the Maison de la Reine, which had fallen into ruin, was restored, taking on the same configuration that it holds today, one based on a mix of the two periods.

But all that remains in terms of links to Marie-Antoinette is its shell.

In the newly restored Maison de la Reine, all of the objects and furniture — including the bed — hail from Empress Marie-Louise, Napoleon’s second wife and the grand-niece of Marie-Antoinette, who occupied the site between 1811 and 1813, explained Jérémie Benoît, head conservator at the Château de Versailles.

But the neo-classical décor was inspired by Marie-Antoinette’s taste. Rare objects include a clock in the yellow salon on its upper floor, made from marble centerpiece offered by King Charles IV of Spain to Napoleon.

Of Marie-Antoinette’s furniture, there remains a table and some chairs in the Petit Trianon, and a small table in the Château de Versailles — “but the rest is in America, unfortunately,” said Benoît.

Reproductions of original features from the building and site include a helical wooden staircase leading off what originally served as Marie-Antoinette’s apartment; the vegetable gardens; lawns strewn with prairie flowers, and trompé l’œil effects on the building’s facade recalling theater decor. “Because she wanted it to look like a building that had always existed,” said Moulin.