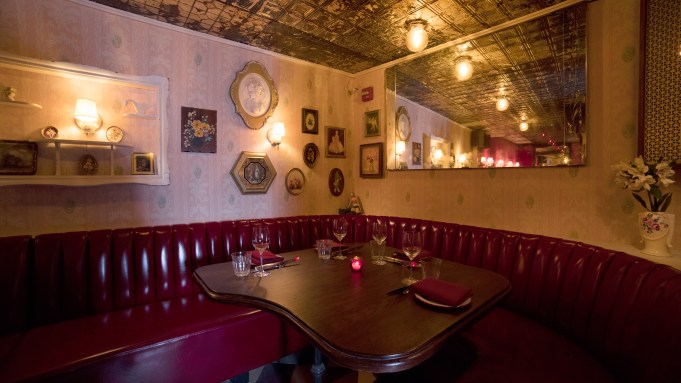 “I thought I’d go to Wall Street and work,” says Matt Abramcyk, sitting in an elevated curved booth inside A Summer Day Café, one of two restaurant concepts he’s opening simultaneously. “I never sought out to be this person that is doing as many stores as I’ve done.”

Over the past decade, he’s opened roughly 20 food and beverage concepts through his Neighborhood Projects Restaurant Group, including Yves, Smith & Mills, an earlier iteration of The Beatrice Inn and Tiny’s and the Bar Upstairs. Last year he opened The Osprey in 1 Hotel Brooklyn Bridge, but for the most part, his focus has been on carving out projects in and around TriBeCa. “I pretty much know what I think the neighborhood needs in general,” he says of his familiarity with restaurant landscape of the area. “What we try to do with all of our different spaces here is coordinate, rather than being competitive with one another or competitive with anything in the neighborhood.”

His latest additions to the neighborhood resulted from a transformation of his previous concept in the space, Super Linda. “I’m always trying to understand what would be the best, most vibrant articulation of a space and how that would connect with the neighborhood the greatest,” Abramcyk says. That approach led him to split the space into two distinct, separate concepts: an easygoing seafood-driven restaurant, A Summer Day Café, on the ground floor, and an underground cocktail bar and barbecue restaurant, Holy Ground. (His wife, Tenoverten founder Nadine Abramcyk, has a salon upstairs in the building.)

With A Summer Day Café, Abramcyk set his sights on evoking the irreverence of a summer day. The menu, led by executive chef Michael Matteo, is focused on contemporary coastal Italian cuisine and stacked with seafood in different iterations, with an emphasis on raw bar. The dining room is cloaked in light, thanks to its window-wrapped corner location along Broadway, and is situated with vaulted ceilings, cozy booths and leafy greenery throughout. Yellow-hued stools are set up along the windows for optimal people-watching.

While “bright” describes A Summer Day Café, Holy Ground is a stark contrast — a reflection, Abramcyk iterates, of its subterranean environment.

For that, the answer was a smoked proteins and barbecue concept in a setting that taps into the Prohibition era. The dining room is crafted with rich mahogany wood, leather booths, vintage wallpaper and stitched wall hangings. Abramcyk partnered with Nathan Lithgow and Franco V, who are giving their previous summer pop-up at Fort Gansevoort BBQ a home through Holy Ground. (Lithgow will also handle the wine programs for both restaurants.) “The barbecue is New York BBQ,” says Abramcyk of the menu, which incorporates fish, sausage and cured meats into the template. “The same way New York is a melting pot of everything, it’s a melting pot of BBQ.”

While each restaurant is distinct, they do share some of their creative talent; Matthew Hunter, an alum of Eleven Madison Park, heads up the bar programs for both spaces, and both restaurants share a pastry chef. The setup allows them to diversify, both for its employees as well as for guests.

“It’s very seldom that people who aren’t going for a very specific [reason] can spend more than a couple of hours in a place,” he says. “The question is, how do we both entice people to come visit us here and downstairs?” And don’t forget upstairs. “My wife’s venue — which is completely different — I know for some of our dear friends who have been going there for years, this is the concept that they’ll love. And they’ll have rosé here every Monday for the rest of their lives.”

With A Summer Day Café and Holy Ground, Abramcyk — whose early résumé includes a stint on Wall Street and working on set for Conan O’Brien — might have found that opportunity, hoping that the concepts will grow into businesses with other addresses.

“Although scale is such an important word for business people, it very frequently has no place in restaurants,” he says. “What I learned from our experience at 1 Hotel is there are these great real estate builders and developers in the world who really fundamentally need personality, and they need texture, and they need people with opinions and people who know how to do all these different things that we know how to do.”

The challenge will be to build and sustain the culture of each of his restaurants, while continuing to bring in and foster new talent, and stay relevant despite the city’s rotating door of eateries.

“The reality is, if you look at it in a really cynical way, the day you open, every single day forward you’re losing value,” he says. “You know what happens in New York — you get a lease and then it goes up by double or sometimes triple,” he continues. “The reality is the work that goes into [building a restaurant] is so intense and the margins are so tight. So from a business perspective, how do we create the vibrant culture in its max and then harness that culture?”

He points to Warby Parker and Harry’s cofounder Jeffrey Raider — who also happens to be a close friend and partner in A Summer Day Café — as a blueprint toward achieving that goal. “I always look to him and his partners, how incredible that they’ve created these incredibly gooey and immersive brands in such a short period of time,” Abramcyk says.

It takes a village — or, in this case, a neighborhood.

“We’re only as great as the team members we have involved,” he adds. “We’re trying to really put ourselves, the people who work here, everyone’s personalities — mix it up, get everyone we know, and build a life together.”

Clean Market, a Cool Place to Heat Up and Unwind