‘Men of the Cloth’: An Ode to Master Tailors

Vicki Vasilopoulos’ film will be screened during the DOC NYC film festival at the IFC Center on Nov. 19 and 21. 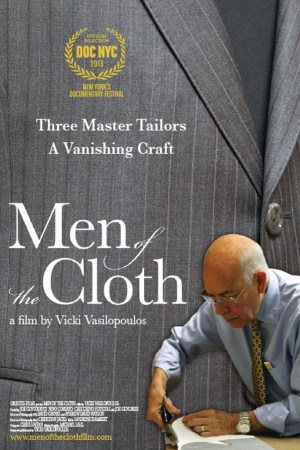 It took men’s editor-turned-filmmaker Vicki Vasilopoulos 11 years to complete her documentary on Italian master tailors. But later this month, she can finally share her labor of love with the industry.

Vasilopoulos’ film, “Men of the Cloth,” will be screened during the DOC NYC film festival at the IFC Center at 323 Sixth Avenue in Greenwich Village on Nov. 19 and 21.

The film follows three tailors: Nino Corvato and the late Joe Centofanti, independent custom tailors in the U.S., and Checchino Fonticoli, who has spent his entire career with Brioni in Italy. It follows the elaborate process of constructing a suit, from the bolt of cloth to the finished garment, and also tackles the subject of the decline of the apprentice system for master tailors.

“I truly admire these artisans who live a life of meaning and purpose — and create clothing that’s as beautiful inside as it is outside,” Vasilopoulos said. “They’re unsung heroes — and my film honors their legacy for a younger generation.”