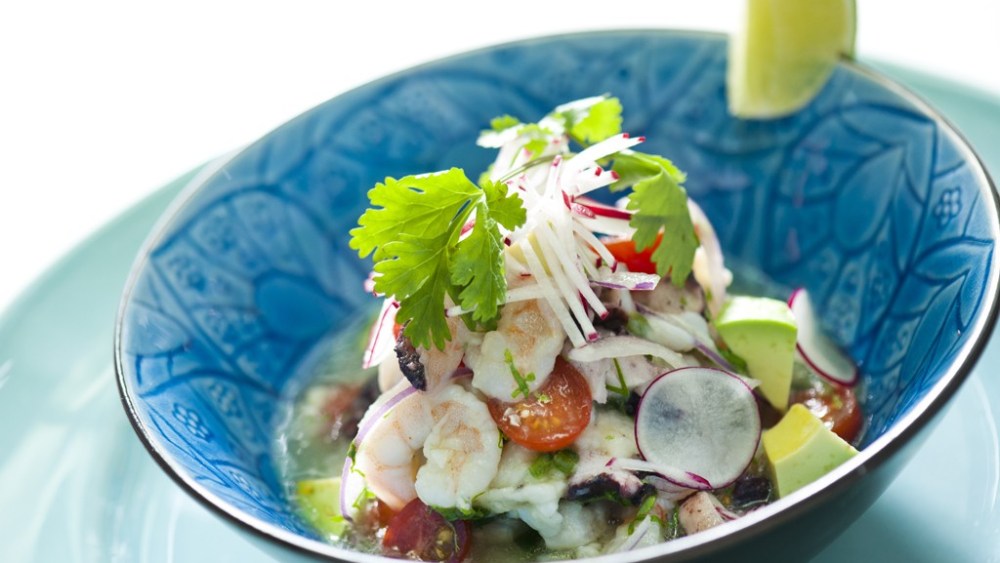 It turned a few toques when James Beard nominee Sam Gorenstein left his glamorous hotel gigs for a ceviche shack in Miami Beach’s South of Fifth neighborhood. But the twentysomething chef couldn’t resist the chance to strike out on his own with My Ceviche, even if it meant having customer space smaller than a bathroom stall.

“People joke a food truck would be bigger, except the city doesn’t allow them,” said Gorenstein.

His takeaway concept was inspired by street stands from his native Colombia’s coast. “They’re all over the place there, so I don’t get why Miami, with all its fresh seafood, hasn’t caught on.”

He has a point, considering the region is ruled by imported branzino. Few chefs get to run wild with his cache of local, line-caught black grouper and triggerfish, not to mention reasonably priced stone crabs (when in season), thanks to his partner, George Stone Crab, a huge retailer and distributor of stone crabs.

Ceviches come with one or combinations of fish, shrimp and octopus, and six preparations, among which Gorenstein favors aji amarillo with the Peruvian staple chile in a Mexican salsa heightened by ginger and mint. A complimentary side of spiced popcorn neutralizes the tangy citrus.

Delivery is available, or picnic in South Pointe Park a few blocks away.

Good for the Soul

Munching on soul food while looking at bikinis during swim week seems just about as incongruous as South Beach’s latest Southern installment, Georgia’s Union. (For those who need reminding, the Peach State fought on the side of the Confederacy.)The down-home restaurant with a kitschy greenhouse theme isn’t an ordinary deep-fried palace, though. This spot touts a clean-living mantra, from its use of organic produce to its cooking methods.

The decor is loaded with quaint items from Granny’s backyard, like patio furniture, or a large communal table that conjures up the Mad Hatter’s tea party, with crystal chandeliers, mismatched furniture and tabletop wares, and many tiny vases with casual country flowers. One wall is all moss, another is potted orchids, plus there are large trees inside.

Fried catfish served in a skillet atop a wooden plank is surprisingly light, especially with a douse of the house’s chipotle hot sauce in lieu of tartar sauce. Sides provoke the real saint-versus-sinner showdown — to choose smoked okra and tomatoes or creamy cheese grits?

Martin’s upbringing in the Texas boonies made a deep impression; his grandmother’s recipes abound, such as her chicken and dumplings gussied up with duck and soft gnocchi —  unlike the lumpy bits most of us remember.

And finally, “This was the dessert we ate every night when I was a kid,” he said, setting down bread in a glass — an ideally unsweet parfait of banana pudding, cornmeal cake and whipped cream.

With SLS Hotel South Beach, Philippe Starck has come full circle. Located next to the Delano — the designer’s entry into Miami’s hospitality scene in 1995 — his new project is even more decked out with wall-to-wall details.

There are his usual antics, like the pool deck’s 10-foot, 750-pound “rubber” duck, but his approach is much warmer and sweeter this time around. For instance, baby pink accessories decorate guest rooms in honor of his new daughter; Hyde Beach’s Old Florida decor of ceramic flamingos and tropical prints is all around, and a vintage canoe and camp photos surround the check-in desk.

“There’s so much expression, because he had nearly eight years to tinker with the concept,” said general manager Albert Mertz of the 140-suite hotel.

Though most mojito-soaked visitors will probably miss the bulk of it, they won’t escape the volumes of food and beverage.

Chef Jose Andres’ Spanish-themed Bazaar grandly unfolds through three distinct and different areas including the front porch and lobby — perhaps a new trend in transforming the traditionally dead zone into dining space. Sushi restaurant Katsuya occupies the splendid, Art Deco former ballroom. A terrace is reminiscent of Le Café Marly at the Louvre, there are secret lounges in nooks upstairs, and refreshments like dry ice caipirinhas eaten with a spoon are served poolside from rolling carts.

“Those sorbets sure beat a chilled towel, but watch out — they’re deceivingly dangerous,” said Mertz.

Up on the Roof

For a city big on beautiful settings, Juvia manages to set a new standard. The rooftop restaurant and bar, the cherry on top of developer Robert Wennett’s “parking garage building” by Herzog & De Meuron, dives into a dining pool oddly shallow on high-floor water views. Battling the moon over Miami for top billing, its piece de resistance is botanist Patrick Blanc’s cascading, tropical explosion of anthurium, bromeliads and ferns.

“The space speaks [to] the city’s context and DNA in this age of globalization,” said co-owner Jonas Millan, a stickler whose two-year design process included researching thousands of chairs before resting on Patricia Urquiola’s rope seating for B&B Italia. “Tourists want to experience Miami with hints of Latin America, not New York or Europe, as is so overdone here and doesn’t convey there’s a beach a few blocks away.”

A big departure in this neutral-numbed neighborhood: the decor demonstrates a rare, well-executed use of purple, too, culminating in the bar’s lit amethyst slab.

“What can I say? The wife likes purple!” said Millan of his all-around partner, Alexandra.