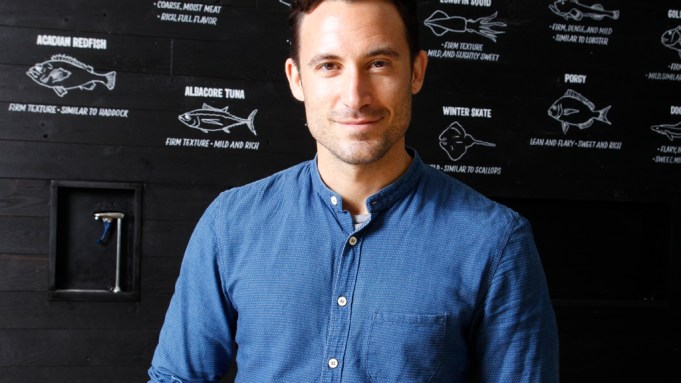 The fishermen on Long Island’s North Shore have a new ally on Broome Street.

Owner Michael Chernow is tapping into the strong following he’s cultivated at The Meatball Shop — and its six locations — for Seamore’s, a restaurant that’s tackling local and less-often-utilized species of fish, opening Monday.

“The ocean is going through some issues — there’s tons of overfishing, there’s tons of over-importing of seafood. Ninety percent of the seafood we eat here in New York and in the country is imported,” Chernow said, sitting in Seamore’s sun-drenched dining room on a recent early morning. The chef, who grew up fishing on Long Island, is sourcing from local commercial fishermen from the East End. “All of these guys are really trying to fight the good fight of keeping the local species alive,” he continued. “I’ve always said to myself, if ever one day I have an opportunity to open up a seafood restaurant, I’d do it.”

Through social media, Chernow linked up with community-supported Montauk fisheries Dock to Dish and Sea to Table to supply the restaurant. Customers may have seen many indigenous Atlantic varieties — porgy, bluefish, skate, dogfish, fluke — on menus before but passed them over for more familiar — and over-fished — species like salmon and tuna. Chernow hopes to crack that reluctance through an accessible menu and the reputation he’s built in the business. A large chart on the restaurant’s wall, which serves as a guide to which fish the restaurant has each day along with tasting notes, also helps.

“I do believe there is a bit of a following now and I can get people to come in here and sit and give us a try,” Chernow conceded. Although the fish may not be as familiar, the dishes that incorporate them are: tacos with healthier accoutrements like hearty kale salads, sandwiches and plates made for sharing like curry mussels and crispy squid.  The cocktail program takes a similar angle towards freshness, featuring “wines by the water” — all of which were produced in coastal wine regions.

“I really wanted to create a light, fresh, airy, clean space,” said Chernow of his shop, occupying a quiet corner in NoLIta. The dining room evokes the beachy, Montauk aesthetic from which it sources with vintage nautical flags and furniture crafted from whitewashed reclaimed wood, zinc and steel. An open kitchen in the back gives diners a glance at their dishes being prepared.