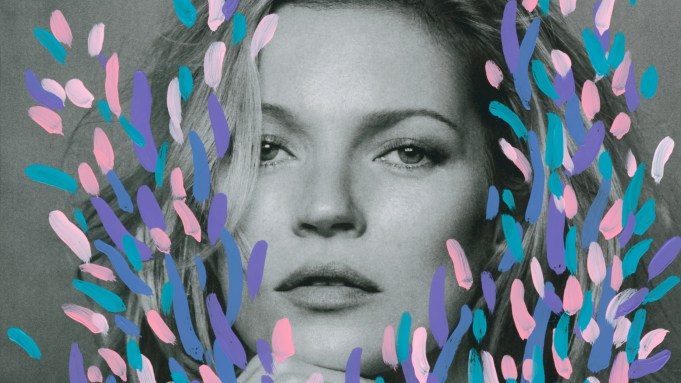 Artist Michael De Feo’s career takes a sartorial turn with the opening Friday of his solo exhibition “The Fashion Pages” at The Garage in Amsterdam. In his 25 years as an artist, his name has frequently been equated with his signature street tag — a simple blossom often placed in urban neighborhoods — that’s landed him the nickname “The Flower Guy” (which is also his Instagram handle).

“The Fashion Pages” sees De Feo morph his signature flower into a fervent swirl of acrylic paint with fashion advertisements and editorials as his canvas. Ranging in scale from a large bus shelter ad to standard magazine-size pages, De Feo takes to the medium to reinvent it.

His attraction to the fashion world consequently triggered two new professional blooms: a Neiman Marcus “The Book” cover for its April issue and an accessories line with Echo New York, available online and at Bloomingdale’s and Lord & Taylor.

After “The Fashion Pages” opens in Amsterdam, it will be shown at the Urban Art Fair in Paris at the end of April. WWD spoke to De Feo ahead of the opening.

WWD: How does the PublicAccess campaign (a project working to reverse the influence of corporate interest by providing tools for changing ad spaces) allow you to vandalize ad campaigns?

MICHAEL DE FEO: Their mission is one that wants to allow the public the right to do what they want with those spaces that have been created and controlled by the powers that be. They want to democratize that space by creating the keys for these different spaces around the world and giving them to anybody who wants to purchase one to do what they want with that space. But they don’t offer any sort of protection. It’s illegal to do. I don’t think it’s illegal for them to create the keys. But once you use the key and take down an ad that’s been paid for in that space, I guess technically that’s illegal. Anybody can purchase these keys through their Web site. There’s a map of the world there, and you can select the city that you want to get a key for and if it’s available.

WWD: And the advertisers are sometimes pleased with your improvements, right?

M.D.F.: Yeah, I can’t speak for all of them but I know that a few, in some ways, applauded my efforts. For example, I had posted on Instagram a photograph of a J. Crew ad that I altered and installed back into a kiosk. Shortly thereafter, J. Crew saw it and then they regrammed it to their followers. They weren’t upset whatsoever.

WWD: Did altering advertisements precipitate your interest in fashion?

M.D.F.: I’ve always kind of had an interest in it but doing these ads had certainly accelerated my interest. It’s what led me to start buying magazines. It’s a very vast creative field, and I find it all so intriguing as an artist. So flipping through these magazines and then making the decision to tear them up and paint on top of those, clearly was kind of seeded by the street project.

WWD: The message behind your work is not some political subversion of fashion, right?  Or is this a commentary on fashion?

M.D.F.: In some ways it is, I guess. I’m not fighting against it. But I think there are some interesting conversations that come out of what I’m doing. I’m not on one side of the coin or another; I’d rather create art that sparks the conversation than guides it just down one path. I mean, clearly, you know, I’m working with some fashion brands. I think street art is loaded with contradiction and that’s certainly the case with this project. Some street artists are very anti-advertising. I think if you’re going to put anything in the street, whether it be an image of yours, or your name or something, you are, at the end of the day, advertising yourself. People are looking at your work. I like that contradiction, I like the conundrum that street art can create and the dialogue that comes with it. It’s not just a pretty picture to look at.