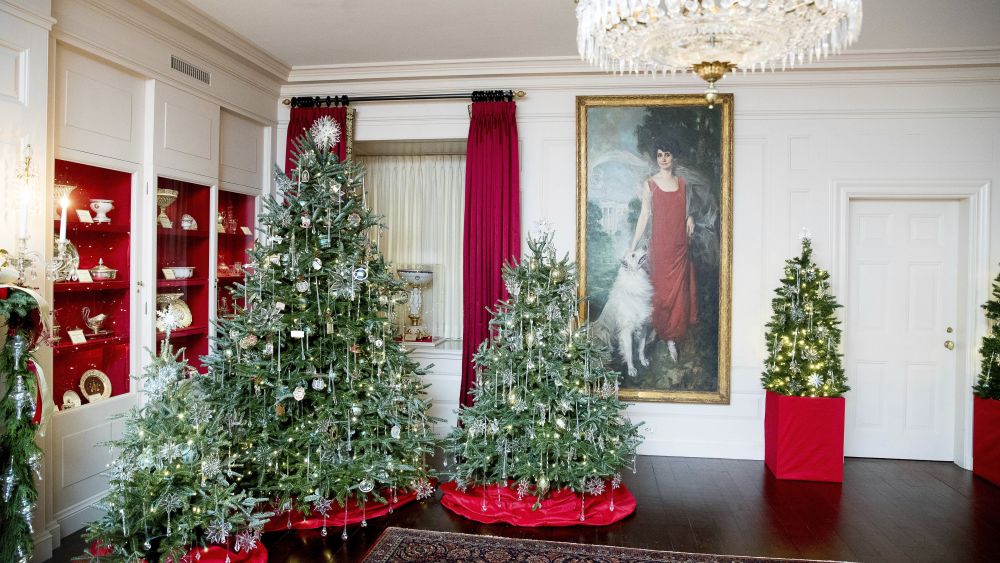 With the gift-giving season now officially in full swing, the White House has wrapped up its decorating for what will be President and First Lady Michelle Obama’s final holiday celebration.

In welcoming military families to the White House Tuesday afternoon, Michelle Obama thanked a litany of helpers including chefs, florists, ushers, electricians and carpenters. In her live-streamed address, FLOTUS told guests that 70,000 ornaments were used throughout the house and chandeliers had to be removed in order to maneuver the 19-foot Christmas tree that is now upright on the second floor. Along with the real cookies that were prepared by the White House’s chefs and pastry chef (including some designed to resemble the First Family’s dogs “Bo” and “Sunny”) visitors will find 56 Lego-made gingerbread houses — one for each state and U.S.-governed territory. There are also gigantic stuffed animal versions of the First Dogs on display.

All of the decor is in line with this year’s theme of “The Gift of the Holidays” — as in the gift of family and friends, reflection and remembrance, and excitement and cheer, according to a blog posted by White House Social Secretary Deesha Dyer. She was first on FLOTUS’ list of East Wing helpers to thank. The First Lady pointed out that the layout of the White House’s library, for example, is decorated to highlight the gift of education.

The strategically appointed earmuff-wearing snowmen, sky-high silver-wrapped boxes and numerous Christmas trees required a major group effort. White House staffers started mapping out their decorating plans six months in advance with the First Lady and a team of designers brainstorming about festive concepts and coming up with sketches for the entire White House including the West Wing and the Oval Office as well as the First Family’s private residence, according to Dyer’s post. “Then, we have the hard task of sorting through a bulk of eager, everyday citizens who want to volunteer to help us decorate. We read lots of fun and creative letters. The volunteers show up the Friday after Thanksgiving and work tirelessly with the designers, White House Executive Residence team, Social Office and so many others to get it all ready! It’s a team effort to bring it all together,” she said.

To give visitors more space to reflect and send messages to Americans serving the military abroad via an iPad, this year’s military tribute has been moved to the East Garden Room. Near the official White House Christmas tree in the Blue Room, there are excerpts from the Constitution and images to represent the diversity of America. During her remarks from the East Room, the First Lady noted that photographs of some of the many military families that she and the President have met are displayed in the holiday decorations.

Giving their parents the green light to check out the holiday decorations on their own, the First Lady encouraged the children in attendance to join her in the State Dining Room. There, with the help of White House executive chef Cris Comerford, White House executive pastry chef Susan Morrison, and White House chief floral designer Hedieh Ghaffarian, she planned to help the youngsters make holiday crafts and treats. Warning that they might not return quite so neat, FLOTUS said, “There is dye…and all of it is washable.”