The Amsterdam-based World Press Photo has staged exhibitions at 10 Corso Como's Milan location for 25 years, but its latest show is a first for the New York store.

The Disappearance of Jamal Khashoggi

Some of the more jarring images indicative of today’s global news events can be found this summer in 10 Corso Como’s New York gallery.

For the first time in its history, the World Press Photo’s 2019 Photo Contest is on view in a U.S. store through Aug. 25. Immigration and the migrant crisis are among the problems explored through this prize-winning photojournalism, as well as America’s opioid epidemic, South Africa’s battle against ebola, and male rape in the U.S. military. 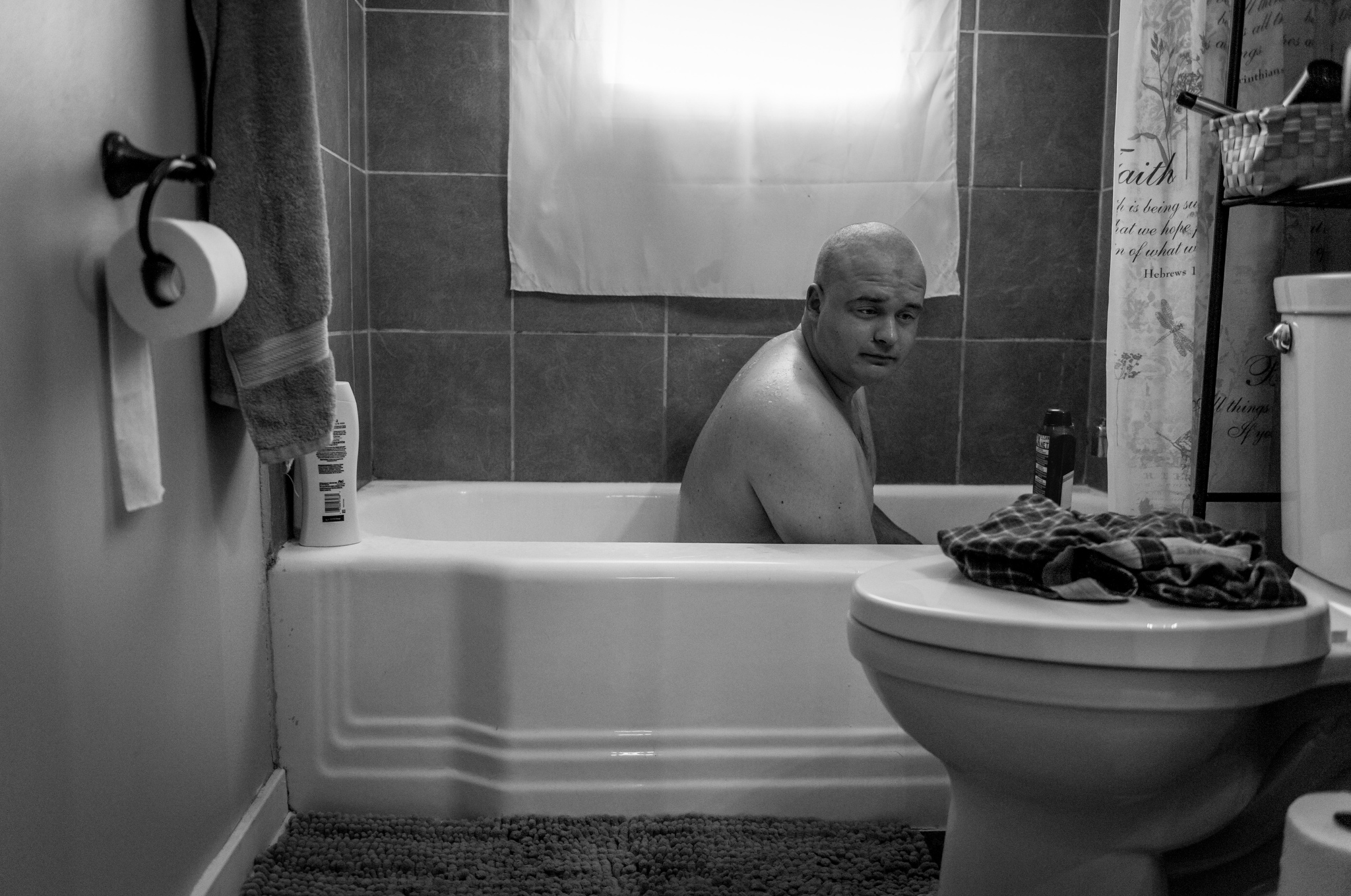 Thursday night’s debut evolved from the WPP’s long-standing connection with 10 Corso Como’s Milan outpost. For the past 25 years, the Amsterdam-based group has staged exhibitions there. Founder Carla Sozzani suggested branching out to the U.S. after last fall’s opening of the South Street Seaport location. As a result, visitors can find leading news photography from the past year, culled from 80,000 submissions. A jury lead by National Geographic’s Whitney Johnson selected winners for eight categories including news-related ones, nature, long-term projects and sports. That winnowing took two weeks, starting with the first round in Amsterdam, which allowed for about two seconds to review each image. “Just a beautiful picture is usually not enough to win a World Press Photo award. And just a good story is also usually not enough. It needs to have both,” said WPP’s Babette Warendorf.

In an interview last month, Sozzani spoke of the cultural ethos embedded in her company. “We have to do events. To make a destination, you have to give. The only thing I ever did with Corso Como was to do lots of cultural events — book signings, exhibitions, presentations. The fact that we always mix the art and the commerce together gives another experience. People don’t need another jacket. It just depends on how you find that jacket or how you enjoy buying a present for somebody else. It’s more about experience than just object acquisitions.”

Upon entering the Front Street gallery, visitors will find John Moore’s “Crying Girl on the Border,” the WPP’s Photo of the Year. He pictured Honduran toddler Yanela Sanchez wailing as U.S. border officials in McAllen, Tex., detained her and her mother Sandra in June 2018. 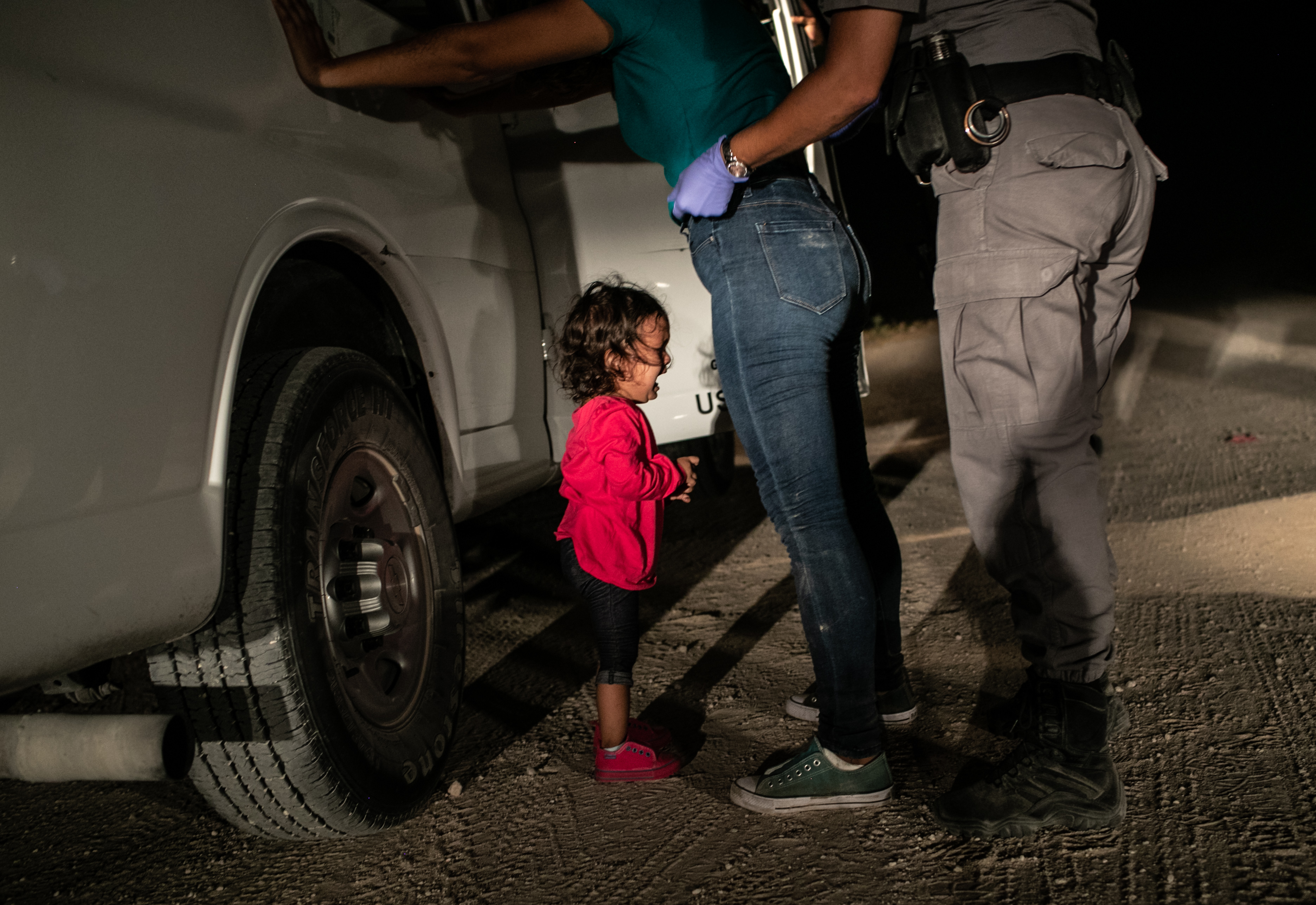 On a nearby wall, “The Migrant Caravan,” a quartet of images by Pieter Ten Hoopen, is the WPP’s Story of the Year winner. A practitioner of “slow journalism,” the Dutch lensman spends extended periods of time with people to reflect Central American migrants’ daily life on the southern Mexico border. The European photographer’s portrayal includes a family bathing, washing clothes and relaxing in a river, as well as a smiling girl picking flowers in a field, during a 50k walk to Niltepec, Mexico. 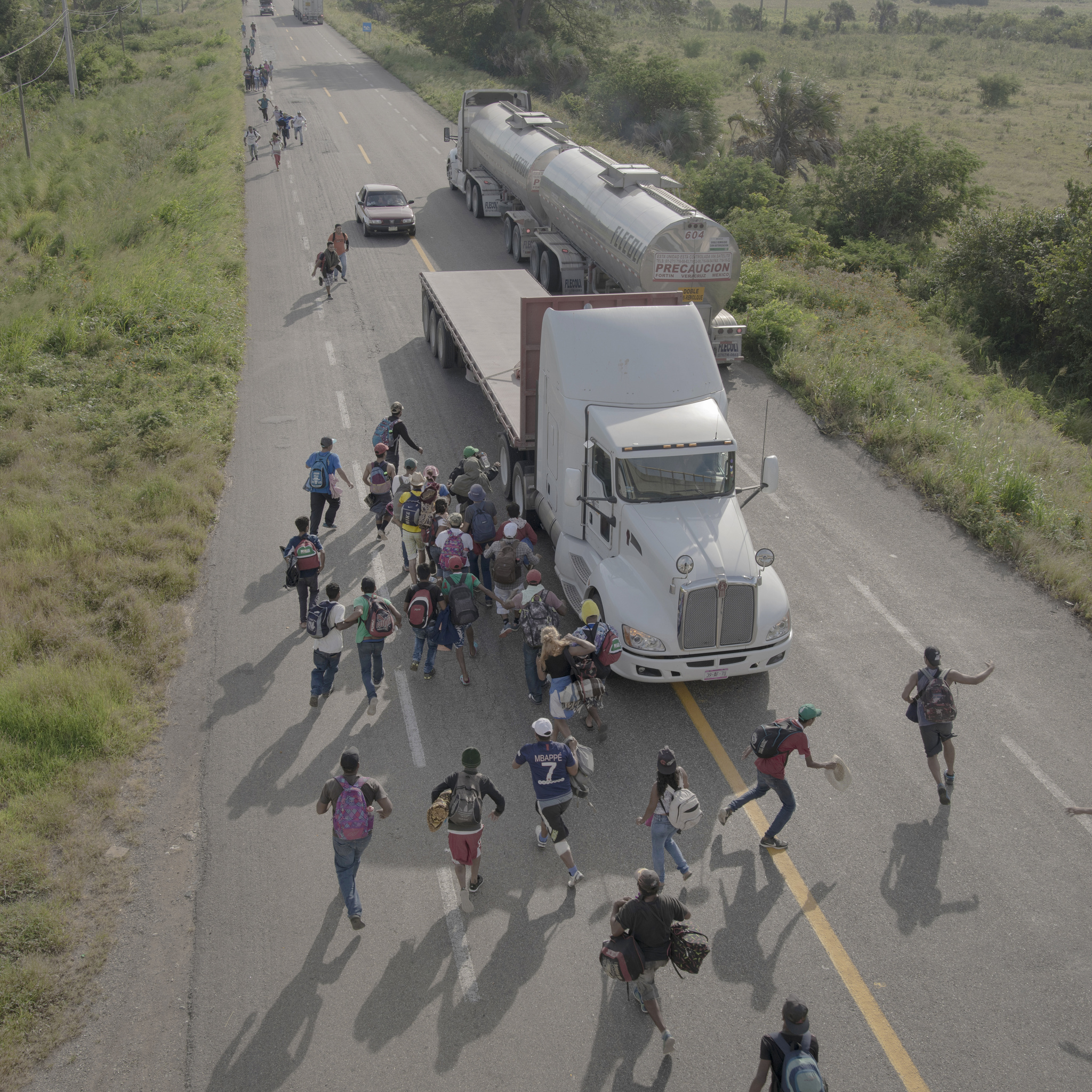 Many of the images have harrowing back stories, including Chris McGrath’s “The Disappearance of Jamal Khashoggi.” That shot shows photographers being held back by a man, as Saudi investigators arrive at the Saudi Arabian consulate in Istanbul following the journalist’s disappearance last fall. There is also Catalina Martin-Chico’s “Being Pregnant After FARC Child-Bearing Ban,” which spotlights an expectant female guerrilla fighter whose previous five pregnancies had had been terminated during her FARC years. (FARC denies such practices, according to WPP materials.) Mary F. Calvert’s “Male Rape” depicts former U.S. Marine Ethan Hanson taking his daily bath, since sexual trauma experienced during his military service left him unable to take showers. There is also Brent Stirton’s “Akashinga — the Brave Ones” which shows a member of an all-women anti-poaching unit in Zimbabwe. 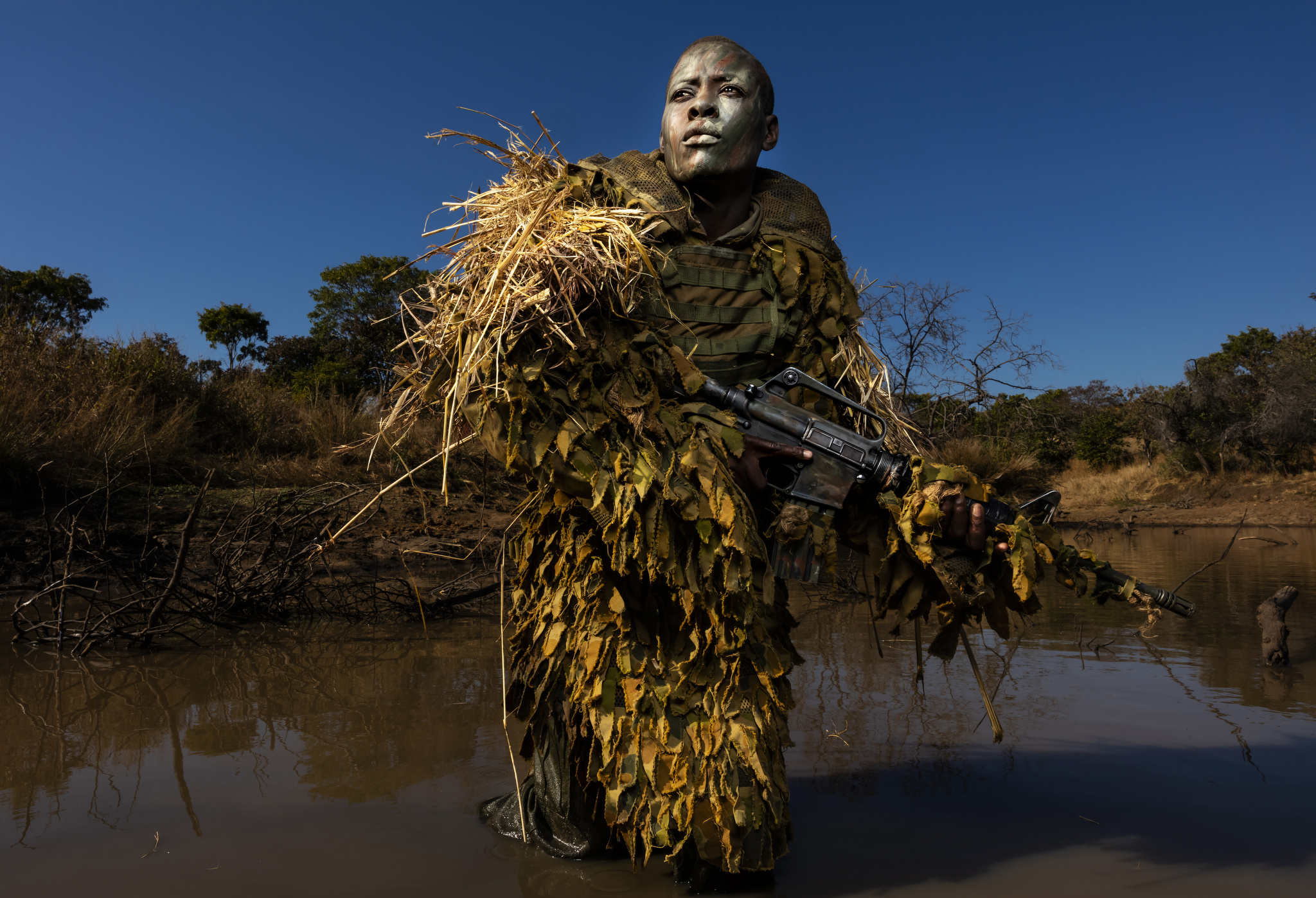 Staring at his prize-winning image on Thursday morning at the gallery, Moore said, “For me, it is a very sad moment in time. The Trump administration had just implemented its zero tolerance policy on the border. That meant that immigrants — many of them seeking political asylum — would be held for long periods of time instead of being processed and released, which had been the case under the Obama administration.” He added that, unlike many, the Sanchezes were not separated, but detained for three weeks. “I had a sense in the moment that it was an important image. There wasn’t really fresh imagery to put a face to the new policy. For many Americans, it was very abstract. That’s what visuals can do. The power of still photography really connects a reader with the event and the moment in history.” 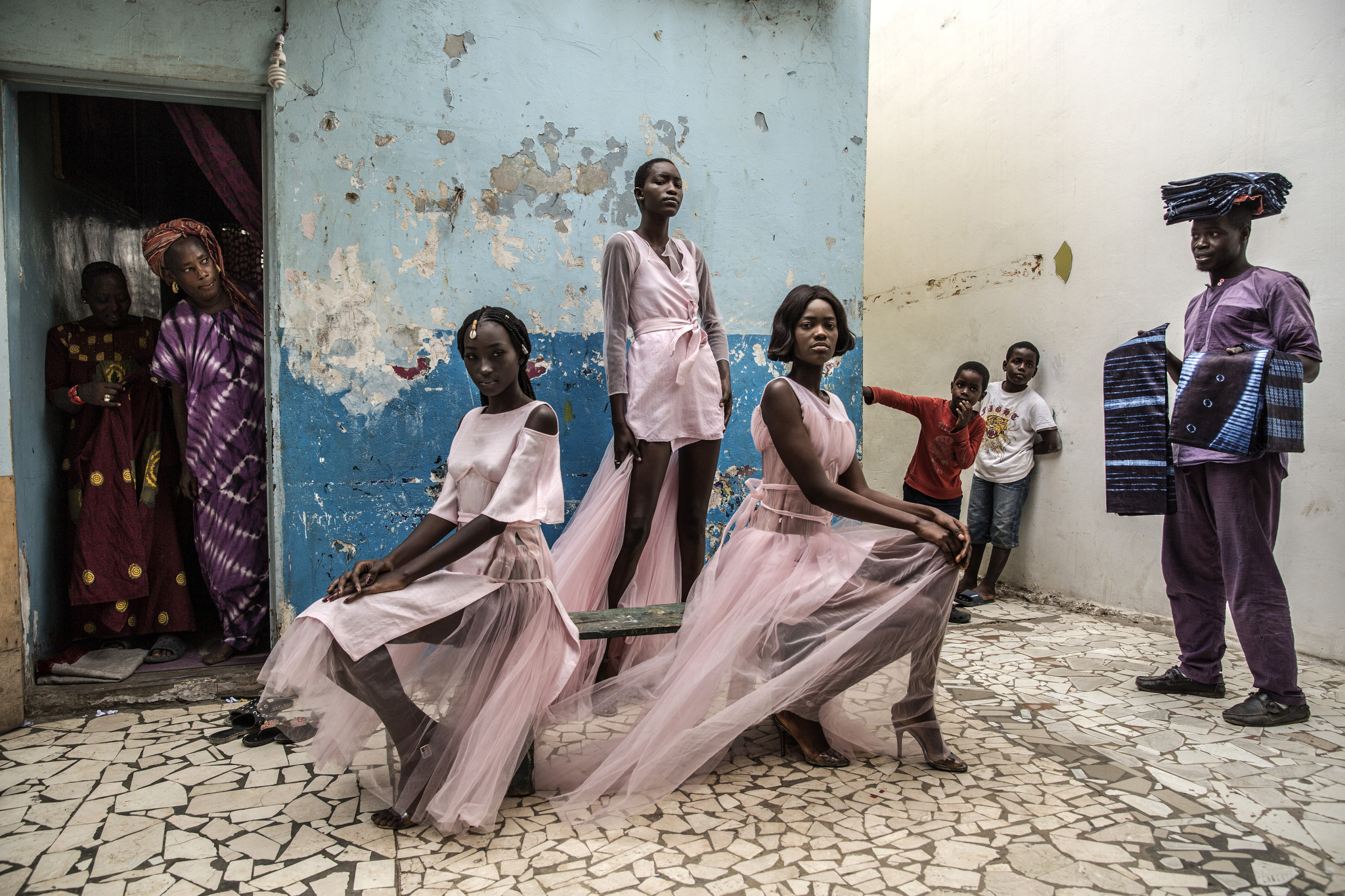 Moore, a special correspondent with Getty Images, started covering immigration issues 10 years ago, but had no idea that it would become the daily news event in the U.S. from 2016 on. While his two daughters Bella and Sophie listened in, he said, “But it remains that way, largely because it is the signature issue of the current administration and in some ways, brought Trump to power.”

Photojournalism’s ability to shift the public psyche hasn’t waned, from his point of view. “Even though people are exposed to so many images every day — stills, video and multimedia — the power of stills remains and continues to touch people. We saw this a week ago again with a border issue — the father and his daughter who had died in the Rio Grande. That picture was published everywhere and it really touched me,” he said, referring to Julia Le Duc’s image of Oscar Alberto Martínez and his 23-month-old daughter, Angie Valeria, that was first published by the Mexican newspaper La Jornada before ricocheting around the world.

Moore added, “The future of photojournalism is in a changing business environment for publications. But that’s independent of the power of photojournalism. There is a hunger for visual content like never before. People look at pictures on their phone all day long and they want to see more. The importance of the profession is as it has always been.” 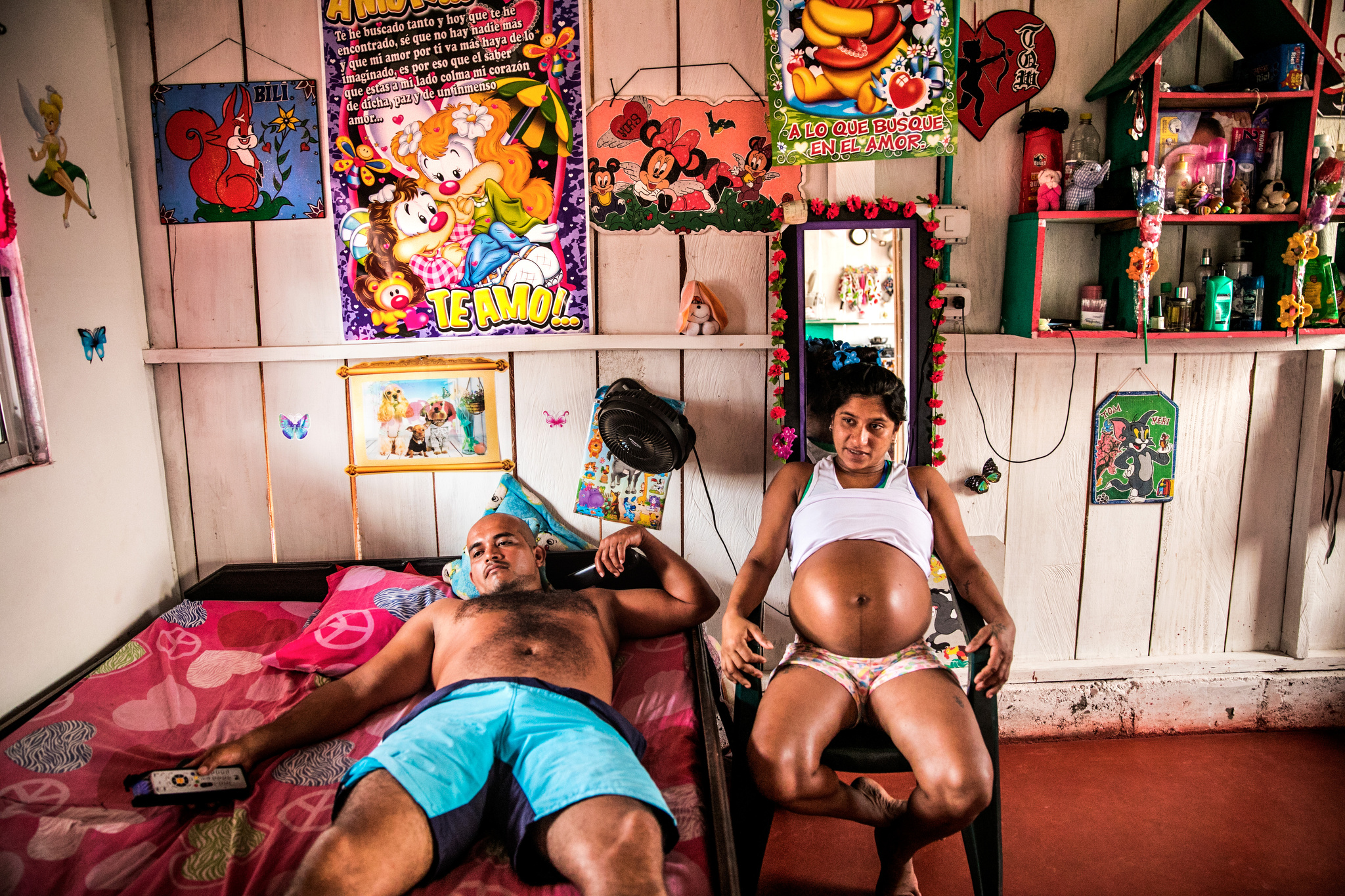 The New York gallery’s manager Ali Price said of the decidedly new non-fashion exhibition: “Whoever comes here, whether you are a tourist or New Yorker, this work will draw you in. Photojournalism is super-important. In a way, it is more important than the words, especially how people respond to things. The show will be a good way to confront a lot of these issues. Obviously, John’s photograph is not an easy photograph to look at, as are some of the others. The whole purpose of the space is that it is a very calming space. Seeing something in an environment that is not a museum, people can take it in as they want to.“