Fashion and Food Meet in Milan

Antonio Marras has designed bottles for oil and wine producers.

MILAN — How close are the fashion and food industries? Very much so, according to the executives and designers who met at Milan’s luxury hotel Palazzo Parigi on Thursday evening for the event that was fittingly called “Food and Fashion,” organized by Galateo & Friends, consulting firm The Style Gate and Forbes.

There are no barriers between the two industries for Antonio Marras, who presented the new bottles and gift boxes he designed for oil and vinegar produced by Galateo & Friends, a Ligurian company founded by Marco Bonaldo, and for Sella & Mosca wines. “I hate any kind of border and I throw myself into art and design as much as into dance and cinema,” said the Sardinian designer. “I am interested in finding in food a visual component, the colors and contrasts intrigue me,” he added, complimenting the table centerpieces made with a flower composition nestled into a cauliflower.

Marras said he “threw himself” into the design of the bottles’ labels “on instinct,” enjoying the exploration of the unknown. And through this, he learned, for example, that the Maestrale wind blowing over the island of Sardinia influences the flavor of the grapes and as a consequence, the wine.

“Sella & Mosca for us in Alghero [where his brand is based on the island] is a symbol, I could never have said ‘no’ when they asked me to design the bottles,” Marras said of the vineyard, which is 121 years old and is the biggest in Europe, he noted.

In his signature style, he hand-painted characters for the bottles and created a sailor, a boxer, an eccentric man and a bandit for the wines, each with their own history. 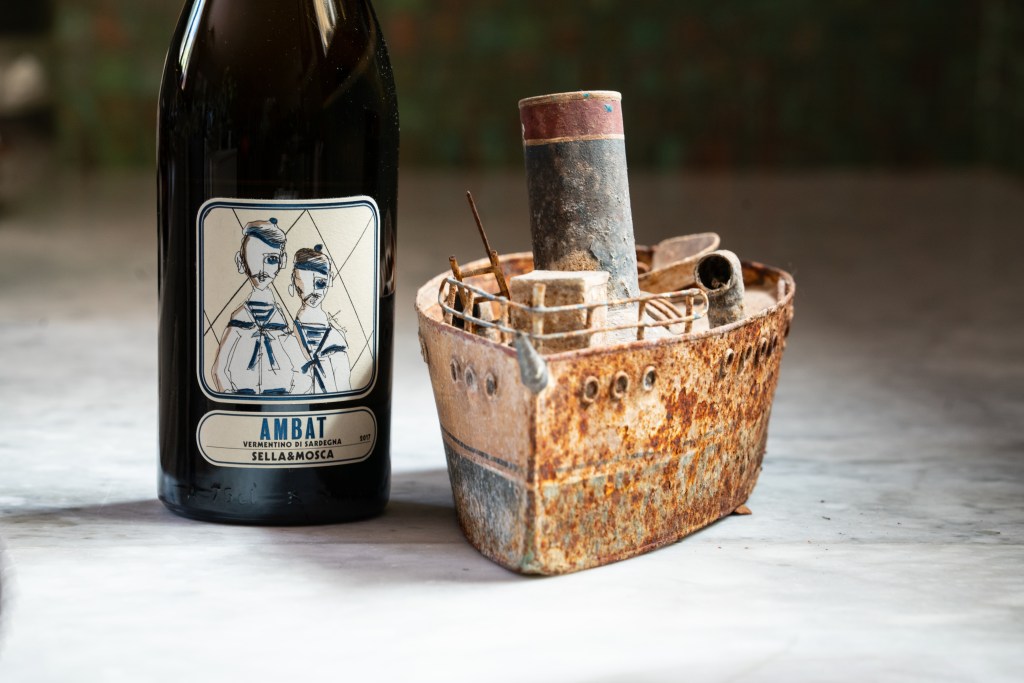 Alessandro Maria Ferreri, founder and chief executive officer of The Style Gate, said, “the world is merciless with those that exit from their own perimeter and enter into a new one, as when a golf pro wants to play tennis or a painter decides to become a sculptor. In reality, there is added value in doing so. Fashion cultivates beauty and creativity, and the next step is to go hand in hand with food. It’s beautiful when the arts mix.”

Sitting next to Ferreri during the panel was Tomaso Trussardi, who helms the family company. Trussardi admitted people were skeptical and negative when he opened the restaurant at the Trussardi alla Scala building, which also houses the store and an exhibition space. “I just wanted to do it, period. I was 25 and chef Andrea Berton was 33. The restaurant received two Michelin stars in two years,” he said, warning, however, that the “stars must be a recognition and not an objective.”

He praised his father, Nicola Trussardi, for being first in wanting to offer the Italian lifestyle. “He used to say that he was tired of prêt-à-porter and preferred the prêt-à-vivre.”

Pierluigi Cocchini, ceo of Rinascente, said the department store opened its first food hall in 2007 and it is working on another one in the chain’s unit in Rome in Piazza Fiume. Each hall is different, depending on the store and the city, he pointed out.

“I don’t think this kind of formula existed in Italy in 2007. We insist that at least 90 percent of our food products are produced in Italy,” said Cocchini. “These are niche luxury products to create an experience. Two years ago, we launched wine, which is perceived as luxury.”

Further emphasizing the importance of tradition, Luisa Beccaria, who has restored the Feudo di Castelluccio, an expansive estate in Sicily, produces oil, oranges and almonds, typical of the region. In addition, her children have opened a successful restaurant and bar in Milan, the Lubar. “I guess they absorbed the pleasure of sharing,” said Beccaria, who is known in the industry for her superb dinners at Castelluccio.