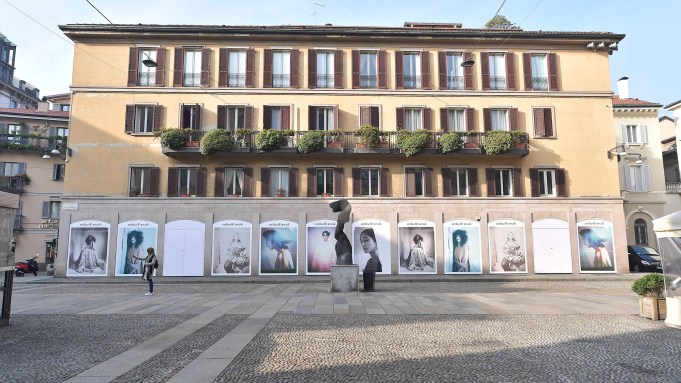 Italians can now add a fun twist to the Latin saying: “mens sana in corpore sano,” [a healthy mind in a healthy body,] thanks to the introduction of buzzy American workout company, Barry’s Bootcamp, debut in Milan.

Brought to Italy through a license by a group of entrepreneurs, including Balmain’s chief executive officer Massimo Piombini, the program’s core philosophy is to provide energetic training sessions to a diversified audience, who carry out the same circuit at the same time choosing one of three levels of intensity. Available in single lessons and packages, the full-body workout concept was founded in Los Angeles in 1998. Since then, Barry’s Bootcamp has added more than 25 locations worldwide, along with a line of activewear and nutritional supplements.

Situated in central Via Senato — a few steps away from tony Via Montenapoleone shopping street — Milan’s 4,306-square-foot unit offers a dark atmosphere interspersed with red lights against a backdrop of motivating music. The space also includes a shop and the Fuel Bar, which offers healthy smoothies and protein bars. As chief executive officer of Barry’s Italia, Piombini said the format will soon open a second location in Milan and will make its debut in Turin by the end of 2018.

If you’re looking for an exotic escape from the shows, don’t miss Saigon, a newly opened restaurant offering Vietnamese cuisine with a modern twist. Owned by Italian entrepreneur Luca Guelfi, the 3,230-square-foot spot exudes tropical charm in a cozy atmosphere, thanks to its wood flooring, straw-covered walls, red velvet chairs and Venini lighting that dates back to the Thirties. Wood ceiling fans imported from India, banana palms and original artworks by Vietnamese artist Do Ngoc Diep add to the exoticism of the location, which was an abandoned industrial warehouse.

The space is located in the residential area of Via Archimede, opposite the new headquarters of designer Alessandro Dell’Acqua’s No. 21 label. Saigon also features a corner bar for aperitifs with a wide drink list including the signature Camélie cocktail that combines vodka, lychee syrup, infusion of hibiscus and lemon grass. Guelfi also owns the Petit bistrot and Ricci restaurant in Milan as well as the Canteen Mexican restaurant that debuted last year and recently opened a second unit in Sardinia.

Food served from 7 p.m. to midnight

Milanese fashionistas have circled June 17 in red on their calendars, as this marks the day Acne Studios officially lands in the city. With its 12 wide-arched windows in the historic Brera district, the 1,776-square-foot store overlooks Piazza del Carmine. The Swedish fashion label’s creative director Jonny Johansson revealed that “it took five years to find the perfect place for us in Milan,” adding that he’s glad that he waited, “because Piazza del Carmine has the exact sense of individuality and community that I like.” The venue used to house a Marc by Marc Jacobs store. A cocktail party will celebrate the opening during men’s fashion week on June 16. The interior design includes rose granite flooring, walls featuring stainless-steel arch shapes mirroring the windows, and low granite tables and stools inspired by ancient stone monuments. A custom-made lighting system, named Mega, is sure to stand out on the ceiling, which is painted in Acne Studios’ signature pink hue.

The luxury brand has relocated its store, moving to 27 Via Montenapoleone, a few steps away from the former location that opened in 2002, and boasting a restyled interior concept. The 1,970-square-foot space is infused with bright and essential elements that communicate modernism and sophistication. Walls covered with suede or light beige Marmorino stucco applied by hand, custom-dyed pure New Zealand wool carpets, oak wood tables, and black and gray metal elements contribute to the sleek design of the store. In addition, pieces belonging to the Bottega Veneta Home collection, including a couple of Rudi Clubchairs and a Murano Lamp, are showcased in the seating area.

To celebrate the opening, two of the label’s signature bags – the City Knot made in French calf and the Olimpia Knot in nappa leather — have been realized in a special denim version to be exclusively sold at this store.

Lucilla, Lucrezia and Ludovico Bonaccorsi have more than just a surname in common. The siblings, whose mother is designer Luisa Beccaria, share the first two letters of their names and a passion for their family’s homeland: Sicily. These two elements combined in the creation of the LùBar [“the bar” in Sicilian dialect,] a street food project founded in 2013. The idea of having a kiosk in Sicily quickly developed and recently found a permanent home at Milan’s Villa Reale, which houses the modern art gallery Gam. The bar offers Sicilian specialties in a relaxed atmosphere, dominated by neutral hues, where marbles and stones are combined with palms and cactus plants that are reminiscent of the Italian island’s vegetation.

Located in the city’s new creative hub of the Porta Volta district, the Hotel Viu Milan is a contemporary-styled, five-star location that counts 124 rooms and suites. Conceived by architectural studio Arassociati in partnership with Nicola Gallizia’s studio, the interior concept features oak wood flooring, Molteni & C Contract Division furniture, custom-made fabrics by Italian textile manufacturer Rubelli, and a collection of artwork in the wide hall. The imposing façade is made of sustainable wood, metal and glass, dominated by windows and several species of plants that form a vertical garden. The hotel includes the Morelli gourmet restaurant and the sophisticated Bulk bar, curated by Michelin-starred chef Giancarlo Morelli along with mixology expert Mattia Pastori. There’s also a spa and a gym featuring a corner dedicated to CrossFit training sessions. Not to be missed — the rooftop terrace that offers a swimming pool and a 360-degree view of Milan’s skyline, an ideal setting for morning yoga lessons or “al fresco” aperitifs at sunset.