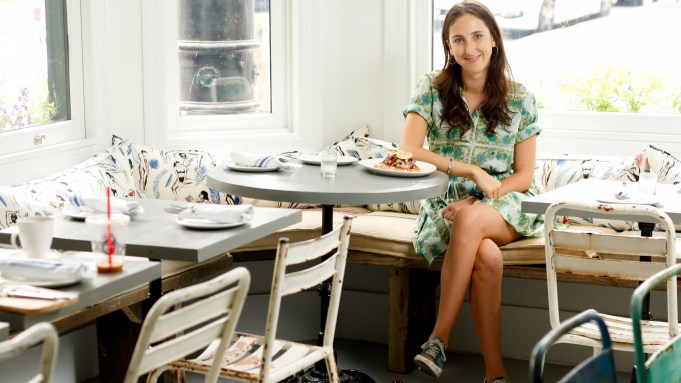 So you’re a recent college graduate, itchy to move on from your first job, and the next logical step is opening your own restaurant in Manhattan — we’ve all been there, right?

For 24-year-old Millie Stallings, that dream becomes a reality today with the opening of Minnie’s, her foray into the food world.

“I did everything — but my mom helped me a lot,” Stallings says, from one of the window-lining benches inside the corner restaurant. “Everything in my house is this shade of gray or blue, and [the design of Minnie’s] is all based off of that. We didn’t have a designer or architect or anything.”

Stallings, who is one of six, grew up in various New York neighborhoods — with brief periods in the countryside and in Rome — before attending George Washington University in DC. “My dad has always had different restaurants; in high school, I would always hostess, and that place is the unlucky restaurant because it always changes. I was always a huge part of the tasting process, and I loved it. It was always sort of my dad’s thing over there, and my mom and I would always say, ‘one day, we’ll have a girls restaurant, and it will be perfect.’”

After graduation she got a job at hospitality public relations group Becca PR, “but it wasn’t up my alley completely” she says. When the space opened up, the “perfect” girls restaurant could become a reality.

Decor touches include custom pillows made by Angela McKay, an illustrator she found on Instagram, as well as antiques her mother collected. The name Minnie’s is an acquired family nickname. “My full name is Mildred, and then it went to ‘Millie,’ and my little brother was messing up the ‘L’ when he was little, so it would spell, ‘Minnie,’” she explains.

Keeping in theme, the food is modeled after their home life. “We’re six kids in SoHo, so it’s impossible to go out to eat and have everyone be happy,” she says. “So I was having a little bit of something for everyone. We have things like birthday cake on the menu, which is this pink, sugary cake — guys hate it, girls are obsessed. [We have a salmon because] I have salmon everyday. We have this strawberry-rhubarb crumble, which we make at home.” Cocktails will be done, naturally, by the 22-year-old son of one of the originals at Apotheke.

“We’re very much ‘learn as you go,’ but that will hopefully be the charm of Minnie’s,” Stallings says. “My sister is working here. My mom is putting on the menu. It’s really a family affair.”