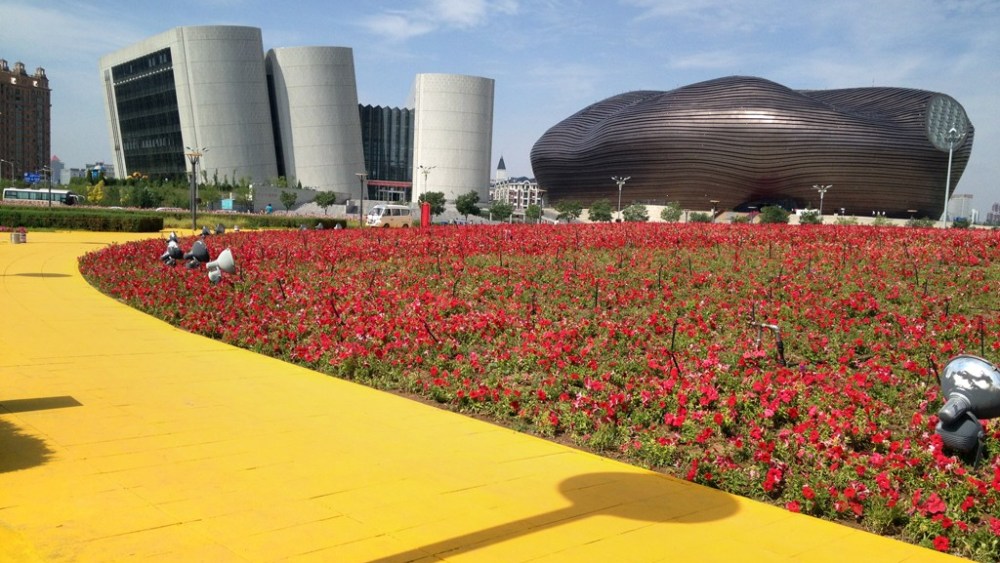 ORDOS, China — Perched on the edge of the Gobi Desert in the heart of China’s rich coal country, Ordos might seem an unlikely city to host an international beauty pageant seen by 1 billion people around the world.

Yet this is a place where everything has been taken to extremes, from the overzealous high-end building boom that made it famous to, now, staging the Miss World competition. For three weeks starting late last month, 118 young women from around the world, along with their handlers and a contingent of pageant organizers, made their homes in the city’s best hotel, the Crowne Plaza.

Contestants took swimsuit modeling excursions into the desert and flew to Shanghai for photo shoots. About half of them walked the runway to show off new designs for a locally based cashmere company that wants to break through into the international market and has hired Western designer Graeme Black to raise its profile. For most of the contestants, and perhaps most of the world, the city of Ordos was a complete unknown until the Miss World competition arrived.

“I had never heard of Ordos, but I’ve been very impressed by it so far,” said Tapiwa Anna- Marie Preston, Miss Botswana, speaking at a cocktail reception before the Miss World fashion show on Aug. 12.

Other contestants said they had hoped to see the Great Wall of China, but realized when they arrived that Beijing was more than 300 miles from this province, Inner Mongolia.

Yu Wenxia, Miss China, was crowned Miss World on Saturday and the giant show and all its trappings will now leave Ordos. Yu’s victory, only the second time China has won the crown, has been lambasted as “fake Miss World” by pageant fans on Facebook as a political choice.

Whatever the outcome, this was a tightly controlled production, of which even many locals in this city, small for Chinese standards, were completely unaware.

“Miss World? Miss World…what is that?” asked Xi Linpi, an elderly farmer who lives with his wife on the outskirts of this city of 1.5 million. “I’ve never heard of it.”

The Miss World competition, which is especially popular in Asia against its main competitor, Miss Universe, has been held in China five times before, on the tropical resort island of Hainan. Ordos wanted the global brand and associated glitzy image, but it was clearly wary of the international press attention that might have come with the event. Some global media outlets had asked to cover the event but were ignored or rejected. Even Chinese press did not make big headlines of the show and its location.

It seems Ordos, which has made global headlines for building a giant new city with hardly any residents, is now intent on controlling exactly how it is seen by the rest of the world.

WWD was allowed to cover the fashion event, staged by the local cashmere brand Erdos 1436, but even that was not without incident. With no explanation, a contingent of threatening men in plainclothes and uniformed police followed and chased a reporter from WWD to the Ordos airport after just 48 hours in the city. Authorities questioned several of the contacts and sources who were interviewed for this story.

Behind the scenes, several people with knowledge of the situation said officials were concerned about international reporting about corruption in Ordos and the property bubble that has worsened amid a private lending crisis that potentially involves government officials.

Before Miss World, Ordos, where per-capita gross domestic product is higher than in any other city in China but Shanghai, was best known around the world as a symbol of problems in the country’s economy. By paying to host the Miss World competition, the city appears to be trying hard to change its reputation. City government officials declined interview requests on all subjects.

In spite of its apparent wealth, Ordos is still very much a Chinese city. International brands are few and far between and there is almost no global retail presence here in contrast to other smaller, wealthy markets in China. Rising up from the pastoral landscape of Inner Mongolia, much of Ordos is a futuristic urban zone, with dozens of glimmering new skyscrapers that, until recently, have sat mostly vacant. Following a coal boom, wealthy residents parked their money in hundreds of new buildings, investing in property rather than living in it. The empty buildings took shape mostly in a new district of the city called Kangbashi, 20 miles from the original town.

Kangbashi has started to fill up, though. A woman surnamed Li, who did not want to give her full name, said she moved to the district two years ago and is happy to have escaped the traffic and pollution of downtown Ordos.

“It’s much nicer here and we have a better environment,” she said.

Still, all is clearly not well in Ordos. New building projects, from high-rises to multimillion-dollar villas, across the city have stalled half-finished with property developers out of cash. Locals say an intricate network of private loans, many reportedly financed by government officials themselves, has faltered and left developers and buyers hanging.

The state-run Global Times newspaper reported Aug. 5 that Ordos has seen a surge in bad loans coming due, in large part because of problems in the unregulated private lending market. Most of those loans were not for industry, but for real estate development.

Liu Dongmen is a security guard on one such construction site in Ordos, a block of unfinished high-rises that was to be 1,200 apartments. Thus far, only six concrete shells sit atop the land cleared for 20 buildings. The developer, Liu said, ran out of money and workers stopped getting paid. He has not seen a salary himself in more than a month but still reports for work every day.

“There are many places like this in Ordos now,” said Liu. “No one can get loans to finish the construction so everything stopped.

“The developers have left and we’re not sure what is happening next.”

According to reports in Chinese media, the lending bust is related to Ordos’ government officials, some of whom were themselves loaning private funds to developers. Late last year, the investigative magazine Caijing reported that the private lending crisis of eastern China’s Wenzhou city had spread to Ordos. The magazine said at least 20 percent of lending in Ordos was done on the “gray market,” outside of banks and regulation.

Economists have speculated that private lending makes up a substantial percentage of property loans across China, an unregulated market that could create serious economic problems nationwide. The problem has already arrived in Ordos.

Zhou Dewen, head of a business organization in Wenzhou, already home to a private lending crisis, said he believes the private lending market in Ordos is twice that of Wenzhou. Ordos has taken some steps to abate the crisis, he said, but it should serve as a “warning bell” to other cities with a rampant underground lending market.

This summer, city officials in Ordos acted on the crisis by institutionalizing the private loan market. According to new regulations, private individuals can still make loans but now are banned from taking deposits or collateral, “or any other form of illegal fund-raising,” according to the city’s Web site.

So, at the same time Ordos struggles with the trappings of a potential economic crisis, the city is trying to draw the attention of the world to its skills as a Miss World host. But it seems to be hoping its newfound global audience doesn’t explore beyond the evening gowns and tiaras.