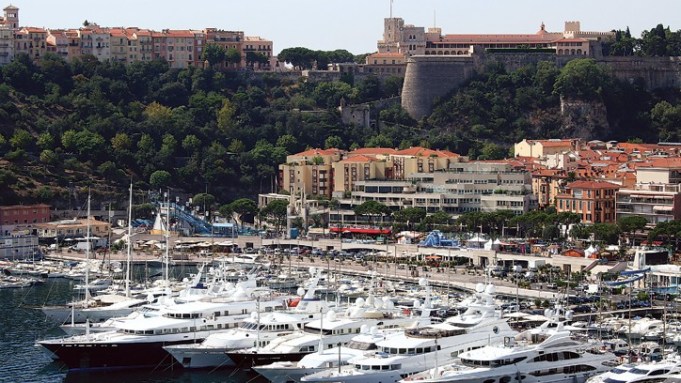 It’s cocktail hour in Monte Carlo and British jeweler Graff has transformed the Hôtel de Paris’ marbled Salle Empire into a garden of multicolored diamonds, glinting among palm trees swathed in green light. The centerpiece of the soiree  is The Lesotho Promise, a necklace featuring 26 white D-flawless stones, the most valuable on the grading system, carved from the 15th largest diamond ever plucked from the earth.

Graff, which throws a similarly lavish party every year during Monaco’s high social season in July and August, knows its guests—whose superyachts dominate the Port Hercule and whose Bentleys gleam outside palatial hotels— aren’t among the easily bedazzled. “If someone has made an incredible fortune, they come to Monaco and they expect this sort of show,” says François Graff, the jewelry company’s managing director and son of billionaire founder Laurence Graff.

Neighboring the Hôtel de Paris stands Les Casinos de Monte-Carlo, a majestic building that marked the creation of the Monte Carlo district back in the 19th century and, along with four other casinos, has defined the principality’s international image ever since. Today, so the advertisements tantalizingly promise, “In Monte Carlo, someone hits the jackpot every seven minutes.”

However, it’s tourism, not gambling, that brings in the lion’s share of wealth to this resort, where gross domestic product per capita neared 50,000 euros, or about $75,000, in 2006. Many of Monaco’s residents, who hail from 125 countries, descend here each summer to clock up the days necessary to qualify for tax breaks. Add to that some 350,000 hotel guests who come for entertainment— be it international sporting spectaculars like the Grand Prix and the Monaco Yacht Show or simply the yearlong display of unbridled opulence. Tourists snap themselves in front of some of the world’s largest superyachts, which were this season dwarfed by the Lady Moura, whose 344-foot, multiple-decked glory makes neighboring vessels look like tenders in comparison.

Monaco’s other draw, as well as sunshine, is its history. Those possessing power and glamour have flocked here for more than 125 years, when visitors included the Prince of Wales, the future Edward VII and Prince Napoleon. During the Belle Epoque, Picasso, Matisse and Braque created set designs for director Sergei Diaghilev’s Ballet Russes at the Opera House and Gustave Eiffel created the spectacular glass roof in the Hotel Hermitage.

In the 20th century, Hollywood came to town, thanks to the late Prince Rainier’s romancing of Grace Kelly in the Fifties. When they married at the Cathedral of St. Nicholas in 1956, Cary Grant, Ava Gardner, David Niven and Aristotle Onassis were in the crowd looking on. “Monte Carlo’s got a mystery from way back in the Twenties and Thirties. It’s magical,” says Shirley Bassey, the British-born singer and Monaco resident whose hits “Diamonds Are Forever” and “Hey Big Spender” made her a fitting Graff guest.

“Whoever’s got the most money at any moment comes to Monaco,” says Lavinia Samuel, a British actress who’s lived in the principality for 27 years. “It keeps the bling going, I suppose.”

The Russians, for one, like Monaco very much, says Victoria Borisevich, who, with her banker husband, escapes “rainy Moscow” for the blue skies of the Mediterranean every summer. “Everyone does the same thing in Monte Carlo,” she explains. “You start at the Monte Carlo Bay Hotel for a cocktail, then go to a good restaurant like the [Michelin-starred] Louis XV, then it’s Jimmy’Z, as usual. In the day we’ll go for a sail.”

With Moscow just a four-hour flight away, a pied-à-terre on the Riviera is a logical step for affluent Russians, says Christian Moore, international director for the luxury real estate firm John Taylor, which counts Monaco as its biggest hub. And, while the credit crunch continues elsewhere, here, real estate prices have doubled in the past year, with a square foot now fetching on average the princely sum of 4,300 euros, or $6,222.

Though a boon for business, it’s a situation even Moore feels can’t continue. “We hope that it reaches a point where common sense kicks in,” he says. “Look at what people are willing to spend on a painting. A few years ago, it was, say, 20 million pounds. Now it’s 150 million pounds. Who’s determining that?” he asks, then goes on to explain the influx of rich Russians: “In Monaco, a small group of individuals dictate the going price for anything.”

One of John Taylor’s hot properties is a 3,300-square-foot duplex in the Golden  Square with views of the harbor, casino and gardens, selling for a cool 25 million euros, or $36.2 million.

Others are here to make investments of a different kind. While several luxury stores bemoaned weaker apparel sales this past summer, business has been brisk for high-end accessories. Graff’s Monte Carlo boutique, located in the Hôtel de Paris, is one of its best performing, according to Henri Barguirdjian, chief executive officer and president of Graff USA, who says diamonds are viewed as a hedge against inflation. “We’re dealing with a clientele that manipulates so much wealth and knows it’s important to have a certain percentage of that wealth in jewelry.”

During what it hailed as its most successful auction of sports cars held to date, the British house Bonhams sold off a 1932 Bugatti for more than 2 million euros, or $2.9 million, to a private European collector this year.

But the rarest luxury Monte Carlo offers is a low crime rate. Though conspiracy theories rumble on about the murder of billionaire banker Edmond Safra in a fire in 1999, security is one of Monaco’s best selling points. With more than 70 closed-circuit cameras around the principality, plus a 500-strong police force for a population of only 32,000, keys are left in Ferraris while Chanel handbags sit unattended in restaurants. “I can go out without my bodyguards,” says Carmen Chesneau, a Cannes resident bedecked in Van Cleef & Arpels jewelry custom-made for her in the house’s Place Vendôme atelier.

“It’s the only place in the world you are secure,” agrees the Baroness Cécile de Massy, who is host of the Monaco brand of Ladies Who Lunch and whose husband is the son of Princess Antoinette, the elder sister of the late Prince Rainier III.

For the royal family, that security includes privacy from prying lenses. Princess Caroline, for one, has fought numerous court battles in a bid to prevent the paparazzi photographing her outside of official duties. And, while the love life of her younger sister, Princess Stephanie, has long been fodder for French celebrity magazines, attention is now shifting to the next generation. As they swing from London art galleries to Paris fashion shows to New York society gatherings, Princess Caroline’s offspring—Charlotte, Andrea and Pierre Casiraghi—have come to epitomize a new glamorous European jet set. Monaco’s strict privacy laws, which require authorization for photographers, are strictly enforced. A visitor spotted with a professional camera will be stopped by police, and those unable to produce a permit will be taken in for questioning. It’s simply good for business.

“Brad Pitt was here for Bono’s 48th birthday for five hours and there wasn’t one flashbulb in his eyes,” says a proud Sammy Sass, the 29-year-old second-generation manager of the hip hangout Sass bar.

At Jimmy’Z nightclub, where a bottle of water costs a whopping 30 euros, or $44, security will confiscate any cameras they spy. “We had Leonardo DiCaprio last night and Kid Rock is here tonight. They don’t have to worry,” declares manager Cyrille Regottaz.

Hosting Chanel’s pre-fall collection here in 2006, Karl Lagerfeld summed up the secret of Monte Carlo’s success: “What I like in Monte Carlo is that I feel liked, I feel wanted. But I can walk on the street with nobody grabbing.”

Facing ever tougher competition from resorts such as Dubai’s Palm Islands, however, Monaco is out to hold on to its title as the preferred playground of the rich by offering attractions other than the casinos, nightclubs and Grand Prix racetrack that helped it win that accolade.

Costing billions, Prince Albert’s plans for the future of his island include a new 10- to 12-hectare district to be built to strict environmental standards in  the Bay of Monaco with a flagship museum, an upmarket shopping mall, yachting quays and residences for 3,000. The prince is studying five proposals from different developers, including the Monte Carlo Sea Land firm, which collaborates with architects such as Daniel Libeskind; the Monte Carlo Development Co., which has enlisted firms including Norman Foster & Partners, and Fonciere Maritime, which works with the architect Frank Gehry, among others. He likely will reveal his choice by next year, with work slated to begin in late 2009 and to be completed by 2014.

On the music scene, the Monte Carlo Jazz Festival launched in 2006, while Moods, a live music bar, opened this year. And next year, the renowned Monaco Dance Forum will collaborate with the centenary of the Ballet Russes.

Monaco is, it seems, undergoing a renaissance of sorts. “There are a million different events going on,” says Mary Coles, a local art exhibition organizer, pointing to the recently opened Opera Gallery. “It offers the latest up-to-date, Modernist and Renaissance art,” she says. “Even Palm Beach hasn’t got that.”