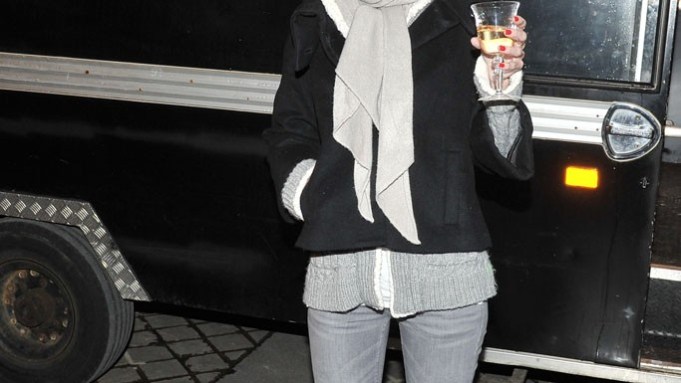 KEEP ON TRUCKIN’: Hip Parisians lined up over the weekend at a gathering of food trucks from all over the world in the paved courtyard of the École des Beaux-Arts. The two-day festival, organized by the trendy food organization Le Fooding, corralled the likes of Bernard Chesneau’s La Porchetta from Copenhagen, who cooked for René Redzepi’s guests at Noma, L’Eau à La Bouche from Marseille, El Camion from Brussels and Morris Grilled Cheese from New York.

“It is a very close replica,” assured Michael Jacober, the owner of Morris Grilled Cheese, whose truck wasn’t shipped over. (The actual vehicle was instead parked at Rockaway, Queens, over the weekend to deliver meals to victims of Hurricane Sandy.) Jacober, who trained at La Petite Cours in Paris, is confident that the French will be seduced by his menu. “They sort of have it here, with the croque-monsieur but it is different. Grilled cheese sandwich is such an American classic,” he said, noting he used bread from famed Parisian baker Jean-Luc Poujauran.

After cocktails, 130 diners were invited to eat around a long table under the Beaux-Arts’ beautiful domed glass roof. All the food trucks’ signature dishes appeared on the five-course menu that was priced at 30 euros ($38), which included brioche with oxtail and boletus; pizza with thin crust, anchovies and the finest olive oil; and grilled sandwich with mascarpone cheese and honey.  Service was overseen by a maître d’hôtel of Le Ritz, who has time off as the hotel has closed for extensive, two-year renovations. To stick to the street food spirit, no cutlery was allowed.

Food trucks are becoming popular in the land of two-hour lunches. “We have always had food trucks in France. I remember as a child, enjoying pizza, crèpes and doughnuts from trucks parked along beaches, but there is a new generation of gastronomic food trucks,” said Alexandre Cammas, founder of Le Fooding, a movement born 13 years ago in Paris in a bid to revolutionize French gastronomy. Cammas, dubbed “the Danton of the Fooding movement” by Adam Gopnik, said around 10 or so cruise around the French capital.

Parisians seek out gourmet burgers from Le Camion Qui Fume (or “The Smoking Truck,” in English), the brainchild of Kristin Frederick, a California chef. Le Camion Qui Fume, which can usually be found in the place de la Madeleine, is a winner of the 2013 Fooding guide, which will be released on Nov. 15.

In May, Le Fooding is planning to organize an event at the Los Angeles’s MOCA museum. Organizers said the best of the new generation of French chefs are going to fly in to meet the best of the new generation of California, including Animal and Kogi food trucks, and cook alongside them. They did not say if any French food trucks would be shipped over.