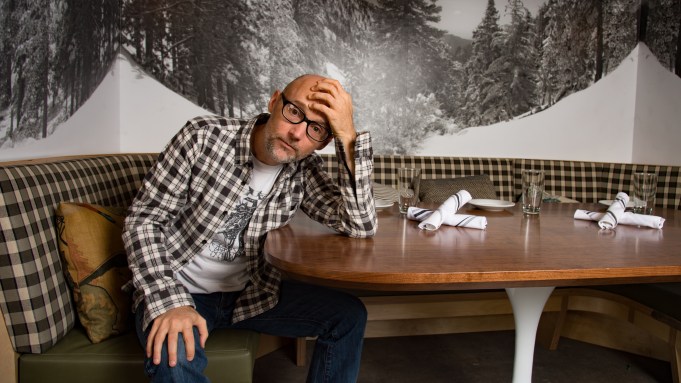 One of the most highly anticipated restaurants to open this fall in Los Angeles happens to be owned by a New Yorker. But Moby’s time on the West Coast certainly has influenced his dietary preferences (he’s a vegan).

A decade after severing ties with his first vegan venture called Teany in New York, Moby is putting the final touches on Little Pine, his vision of a mountain cabin adapted for the hipster neighborhood of Silver Lake. The restaurant boasts midcentury modern flourishes and a farmer’s market-enriched menu that elevates from stereotypical vegan fare (think lentils and mashed yeast). Sitting in a banquette constructed from plywood, plaid fabric and pleather (or, as it’s now sometimes termed “vegan leather”), the 50-year-old musician looks as if he stepped straight off a nature trail into the 1,500-square-foot space. Meeting with his staff on a Friday afternoon to finalize the menu, which will offer organic fare from 7:30 in the morning to midnight everyday, he’s dressed in hiking boots, jeans and a flannel shirt draped over a T-shirt, screen-printed with a skeleton shrouded in barbed wire. Having eschewed meat, fish and dairy for 28 years and adopted Los Angeles as his hometown for five, Moby has found a locus to indulge his passions for food, design and community. He instills everything he adores about Los Angeles, with a pinch of nostalgia for his childhood in New York and a past romantic sojourn in Paris, into Little Pine, dispelling the “plastic surgery, ‘Baywatch’ and palm trees” he cited as his East Coast friends’ common misconception of the sprawling metropolis.

“I was going to use a nonvegan analogy — it’s like killing a lot of birds with one stone,” he said, adding “but that’s not the appropriate thing for an animal rights activist to say.”

Moby’s quest to open Little Pine on Nov. 19 endured plenty of plot twists. At the time he purchased the property for approximately $1.5 million in January, the baby-blue building resembled a smaller, shoddier version of the Frank Lloyd Wright-designed Guggenheim Museum in New York. With a shiny coat of white paint, “now it looks like an Art Deco spaceship,” the architecture buff said. After much fanfare prompted by a press release and a de rigueur photo shoot in Little Pine’s kitchen, Anne Thornton, the pastry guru who dove into desserts for The Waverly Inn and Hotel Griffou in New York before becoming a Food Network host, quietly left as the designated chef. “She simply decided she didn’t want to be specifically tied to one place,” Moby explained.

After that, Moby hired Kristyne Starling, formerly of Messhall Kitchen and Aventine, as Thornton’s replacement to concoct a menu that offers wild mushroom crepes, meatballs with polenta and a salad of cucumber, fennel, apple, dill and borage flowers. He also took on the task of navigating the city’s Byzantine bureaucracy and passing the inspections for the 58-seat establishment — all of which pushed the grand unveiling from August to November — just a week before Thanksgiving.

Perhaps the timing is fortuitous, for the eatery can serve as a source of repentance after the nation’s day of turkey-flavored gluttony. It also has a healthy dose of holiday spirit (read: consumerism). In order to keep the half-dozen spots in its parking lot, Little Pine is following the city’s mandate to operate a store, albeit one measuring 200 square feet.

“At first, I was really annoyed about that,” Moby said. “It meant less space for people. Then when I realized there was no way around it, I got excited.”

The Carrera’s marble shelves and wood cubbies lining the front hallway hold $20 pinhole cameras, $24 bird-themed letterpress cards and a cache of candles smelling like everything from tuberose to tobacco-tinged bark. “It’s absurdly curated by me,” Moby said, adding that he also stocked merchandise made by his friends, such as an art book by Pop Surrealist painter Mark Ryden.

Working with Studio Hus, Moby also took the lead in designing the place. A moody, monochromatic photograph that he snapped of Mount Baldy’s snowy forests last February is wallpapered above the side banquette that is the focus of the dining room. Also lensed by him are a pair of oversize prints hanging in the dining room that he snapped in Griffith Park — a testament to his “weird love of out-of-focus abstract photos.” In the center, the eight arms of a steel chandelier by Jason Koharik dangle like thin tree branches above Herman Miller Eames chairs, pillows upholstered with nature illustrations and pale green tiles stenciled in an argyle pattern. Outside on the Sol Lewitt-inspired facade, a deep green stencil of a pine tree identifies the restaurant among apartment buildings and mom-and-pop shops.

While Moby is also an investor in another local vegan restaurant, the upscale Crossroads Kitchen, he is deliberately pricing Little Pine’s food in a way that it wouldn’t be, in his words, “off-putting.” A slice of maple-glazed cinnamon walnut shortcake costs $4 and a small soup is $5, and the most expensive dish goes for $14. He is also directing Starling to cook a tomato and seitan cassoulet that he first tasted in a Parisian bistro and create a vegan version of a childhood memory. “When I was growing up, my favorite thing to eat was giant shells stuffed with ricotta,” he said.

If Moby has his way, then the kids from the two schools located a block away will climb on the low yellow stools to nosh on Little Pine’s trio of shells stuffed with olive and pesto, roasted artichoke and herbed cream, and spinach ricotta and marinara sauce. Moreover, Little Pine will add to the city’s vegan food scene, which already counts Gracias Madre and Café Gratitude as destinations popular with starlets and paparazzi.

Ultimately, Moby hopes to replicate the inviting ambiance he felt at bistros that surrounded his former home near Invalides in Paris, where he observed locals dropping by throughout the day for breakfast, lunch, a snack with their children and a late night glass of wine. “That’s the goal: to both really serve and be an extension of the neighborhood,” he said, because, in his eyes, it’s “a breathing, living, organic neighborhood.”