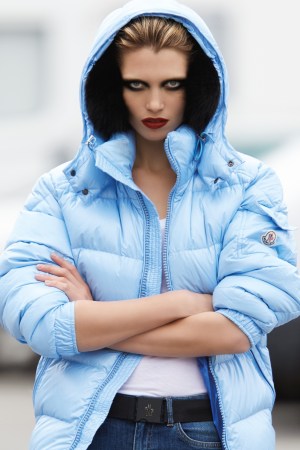 The Moncler president was speaking recently before the label unveils a private exhibit at the New York Public Library featuring the work of 32 of the most celebrated names in fashion photography on Thursday night.

Curated by Fabien Baron, the editorial director of Interview magazine, the group includes Patrick Demarchelier, Arthur Elgort, Annie Leibovitz, Bruce Weber and many others. Ruffini asked each of them to shoot Moncler’s Maya duvet jacket — which was designed the year the brand was founded in 1952 — however they wanted for the group show.

“It’s something really incredible because we gave [the photographers] the freedom; we didn’t give them any brief,” Ruffini says. “We said you have to do exactly you, and that was really the key.”

Paolo Roversi, meanwhile, wanted to capture “first adventures,” so he shot his daughter, Stella, near the Pont Alexandre III bridge over the Seine at 3 a.m.

Pamela Hanson shot one of her muses, Julia Restoin Roitfeld, in her Chelsea apartment in order to depict the jacket in the most “natural way.”

Called “Art for Love,” the exhibit will support the HIV and AIDS research organization amfAR through a silent auction — also available through Paddle 8 — at a dinner Thursday expected to draw some of the top names in fashion photography, such as Terry Richardson, Vinoodh Matadin and Inez Van Lamsweerde, plus the participants in this exhibit and their muses.

Funds will go toward amfAR’s “Countdown to a Cure” project, which aims to find a cure for AIDS by 2020.