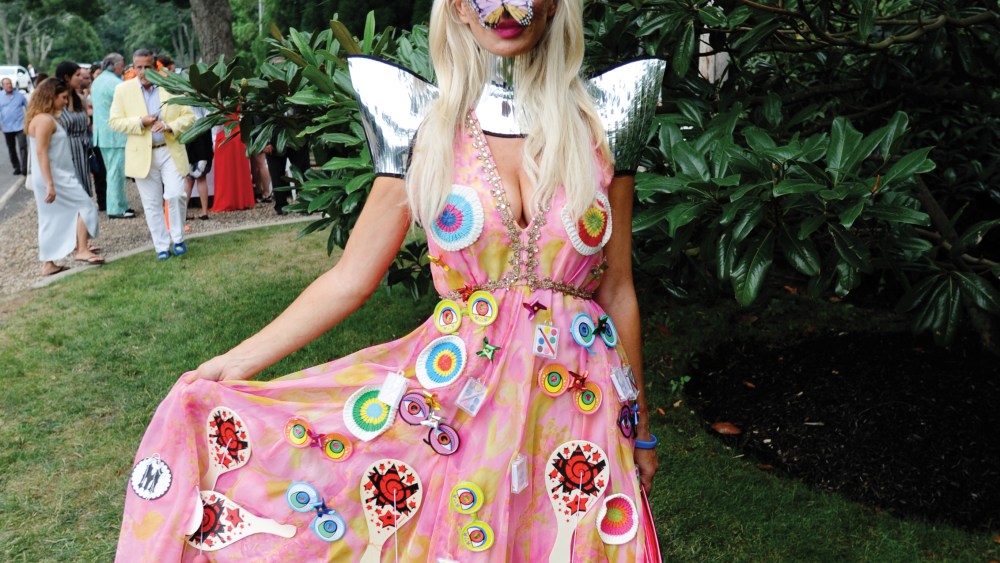 The Hamptons, a onetime respite for humble artists and writers, flexed its wealth last weekend at the Super Saturday and The Watermill Center events — raising millions for their respective causes.

Nowhere was the income divide clearer than at Robert Wilson’s Watermill Center benefit, where many guests were rattled by the East End’s still-escalating affluence. “We tend to avoid the Hamptons-proper,” said Suno codesigner Max Osterweis, with stylist Kate Foley in tow. “It’s been a while [since this was a place for creatives],” he said.

“Artists can’t afford to be anywhere near this place anymore, nor can a writer — the real estate is beyond and that’s really sad. It’s become a billionaire’s playground and in many ways it’s ruining the Hamptons — everything costs a fortune and people are ruder every summer. It’s very frustrating for those of us who have been living out here a long time,” said Southampton resident Fern Mallis.

The Watermill Center benefit — a social circuit mainstay that sees art scions gallivanting through installations within the property’s woods — auctioned works by Nan Goldin and Francesco Clemente to raise funds for its operations, including an annual residency program. The organization sold the most tickets ever for the event, and raised $2 million in the process. But while the fund-raising was a hit, the event itself started out on a downer when the night’s purported main act — likely the reason for its success — withdrew from the lineup.

Kanye West was scheduled to perform, but issued a statement with Wilson saying that the temperamental artiste had postponed his participation until next year. That might have caused a stampede of cancellations except for one thing: The tickets, which started at $650 each, were nonrefundable.

In West’s absence, it was up to the event’s collaborator, the anonymous arts collective The Bruce High Quality Foundation, to provide the evening’s air of mystery. On the music front, organizers were able to quickly corral a rap replacement: 2004’s most-celebrated hip-hop act, Ja Rule, who staged an impromptu late-night performance. “I’m an old-school Hamptonite from back in the day of Diddy’s white parties,” the artist, born Jeffrey Atkins, told WWD during cocktail hour, during which artists and benefactors mingled under a tent, collectively evading the rain.

But when the clock turned 8 p.m., an upstairs-downstairs dichotomy struck. While benefactors filed into a tent to hobnob over a lavish dinner, art fabricators and fellows were left to dawdle for hours, the only sustenance a communal bowl of couscous, leftovers from the main dinner.

Seeking more natural entertainment, many decamped for the woods to smoke weed.

“Rich artists can afford it here, but also these artist residents are here [at Watermill] from all over the world to study, exchange ideas, have sex — it must be fun,” pro-misconduct author Jay McInerney said while surveying the scene.

Earlier in the day, at the annual Super Saturday shopping event, nannies loaded children onto a rusted Ferris wheel while mothers bum-rushed to buy marked down fashion merchandise. The event was held at arts center Nova’s Ark Project, but the property’s sculptures went largely unnoticed amid the commercial frenzy.

While the shoppers scurried through the end of July blanket of humidity, designers like Jill Stuart and Donna Karan had other business  on their minds as New York Fashion Week approaches, questioning the entire industry system.

“I’m starting to get into the pinch of fashion week in the first week of August,” Stuart said. “I am considering see-now-buy-now, it’s a great idea. I think people want to buy right off the runway.”

Karan, a cohost of the event — now in its 19th year benefiting ovarian cancer — said, “The fact that we show at a time with social media, customers are bored and confused and don’t know what to buy — it’s really a mess if you ask me.”

She declined to comment on last week’s sale of her former company by LVMH Moët Hennessy Louis Vuitton to apparel group G-III for $650 million. But at Watermill, DKNY codesigner and Public School cofounder Maxwell Osborne said he has yet to meet with G-III executives since he’s been out of town. But he was toeing the party line nonetheless: “We are really excited about the whole movement — it’s one of those things that just happens.”