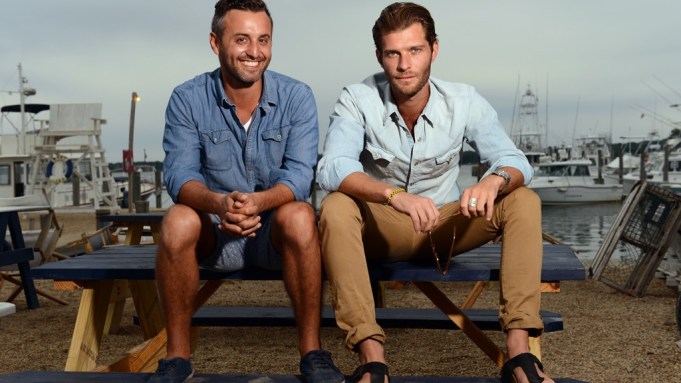 Impatient patrons get creative. A huddle of wedge-wearing girls plots its entry by feigning an acquaintance with Ben Watts.

“It’ll totally work,” one slightly slurry girl insists. (It doesn’t.) “Watch me,” she says before hobbling up to the bouncer. Inside, the Rolling Stones’ “Beast of Burden” floats through the air; Edison bulbs strung above a swelling crowd twinkle; smokers traipse across the sand dunes towards the water for a quick cigarette; a hive of thirsty patrons buzz about the outside bar.

The whole scene is testament to a fact fairly obvious to most East-enders by now: “Moby’s,” as it’s oft called by regulars, has become the see-and-be-seen spot of the summer. The first out-East spot from restaurateurs Nick Hatsatouris, 34, and Lincoln Pilcher, 31, the eatery by day, hot spot by night is a hidden appendage to Rick’s Crabby Cowboy Cafe, a mainstay in Montauk. It’s a pebbly nook, tucked back down a hidden passageway on the periphery of Rick’s, outfitted primarily in navy and cream. Glowing tiki torches delineate the space; reclaimed wood picnic tables run down the beach bar’s center; deliberately tattered crates serve as coffee tables in the lounge area; the menu is chalked on a blackboard by the entrance. And it is perennially packed by a specific niche of Montaukers: a decidedly cool crowd looking to avoid the East End’s version of Meatpacking madness.

“Most places in Montauk are full of, like, 22-year-old fratty bros,” one girl, chic in an easy Isabel Marant playsuit and Marni sandals, explains on line for the ladies room. “This place is a little more adult but still fun.”

The following afternoon, on an aberrantly gray Sunday, the scene is quite different. A school of antsy preteens traverses the courtyard on their way to climb a towering lifeguard chair while their parents cut up their pizza. A middle-aged couple, both in Navy Beach emblazoned hoodies, on an adjacent picnic bench sip rosé and take in the view: a marina full of docked boats bobbing in the water, squawking seagulls above.

Hatsatouris and Pilcher acknowledge the dichotomy in their clientele.

“I was saying to someone earlier that the beautiful thing about this property is that it caters to everyone,” Pilcher says, perched on a nautically striped banquette. “Cynthia Rowley can come here on Sunday at 7 p.m. for a quiet pizza dinner and she knows not to come on a Saturday night at midnight since it’s a different scene then.”

“At 5:30, 6 o’clock there’s a full seating of families with young children running around, like this,” Hatsatouris adds, motioning over to a brood of kids bopping around in front of a live band playing by the water’s edge. “But then a more mature crowd comes later on and that’s great for us too. The late-night crowd is different. They have different demands and want a different experience but what’s great about this property is we can do both.”

The pair found the space May 1 of last year and turned what was then “a dirt lot,” by their estimation, into the beachside boîte in just over three weeks. “We have a lot of energy,” Pilcher chuckles of the snappy turnaround.

“You know, we’ve been doing this awhile, so we have an understanding of what the key things are to focus on. We’ve opened many places together so we know what’s critical to get the doors open,” Hatsatouris adds.

The two met just after high school in their native Australia. Pilcher came over first as a photographer — his résumé boasts spreads for Vogue China, Vogue Australia and GQ Japan, among others — then haphazardly got involved with food. “I was doing photography at the time but then I got involved in a little restaurant downtown, then Nick came on board a couple years after to help launch another project,” says Pilcher, who dates model Carolyn Murphy. “I guess things just kind of snowballed from there.” The two have opened five spots together, most recently Kingswood in New York and Eveleigh in Los Angeles.

“We’ve done a lot of projects but this is my favorite,” Pilcher says. Conceptually, the spot is modeled after the mellow atmosphere of an Australian pub. “Where we grew up, in Sydney, it’s a very similar vibe to Montauk. Surfing is a big thing. They have a more laid-back nature,” he continues.

RELATED STORY: They Are Wearing at Montauk’s Shark Attack Sounds >>

The restaurant doesn’t take reservations; families often come straight from the beach, their toes still sandy; diners order directly from the open kitchen, where they’re given a numbered buoy to place on their table and food is served when ready. Drinks are ordered directly from the bar though a beer and rosé cart wheels past the tables every so often. “When I come to Montauk, and I’ve been coming out here for 10 years, I don’t want to go to a restaurant that feels New York,” Pilcher says. “I want people to be able to join and leave as they want, to be able to table hop. Last night, this table right here had four buoys on it just from people joining later and ordering at different times. It’s family style and has that ease of shared plates.”

The pair tapped Il Buco executive sous chef Gary King to man the kitchen. Together they crafted a seasonal menu that changes daily with no more than a dozen offerings per night. It has a rustic, Mediterranean flavor profile with standout plates in the rotation including a summer squash and zucchini wood-fired pizza and line-caught whole-roasted porgy served under a bed of grilled zucchini, charred shallots and basil.

“We thought, ‘Let’s do a small menu but just do every dish really, really well as opposed to doing lots of options,’” Hatsatouris says.

“The important thing was the freshness of the produce,” Pilcher adds. The menu is ingredient-driven with all produce sourced locally, very locally.

“The fish comes right off the boats here in Montauk. The pearl oysters are farmed right there,” Hatsatouris says, pointing to an oyster farm floating in the water just off the dock. “We’re working with Balsam Farms in Amagansett so they drive in their pick-up trucks with the kale every couple of days.”

“That was our big thing, to integrate the community into this project,” Pilcher adds. “I mean, the guy from the local hardware store is always here. The guy from the marina next door comes in for dinner with his wife almost every night. The local fisherman guys come and hang out. We wanted this to be a place that they can come and not feel ostracized by the city slickers.”

For those city slickers not up for the three-hour-long trek out east every weekend, the pair have opened a city outpost, a pop-up with the same menu and concept in the Soho Grand called Gilligan’s, a riff on “Gilligan’s Island.”

“We spend a lot of time on the jitney,” Pilcher says.