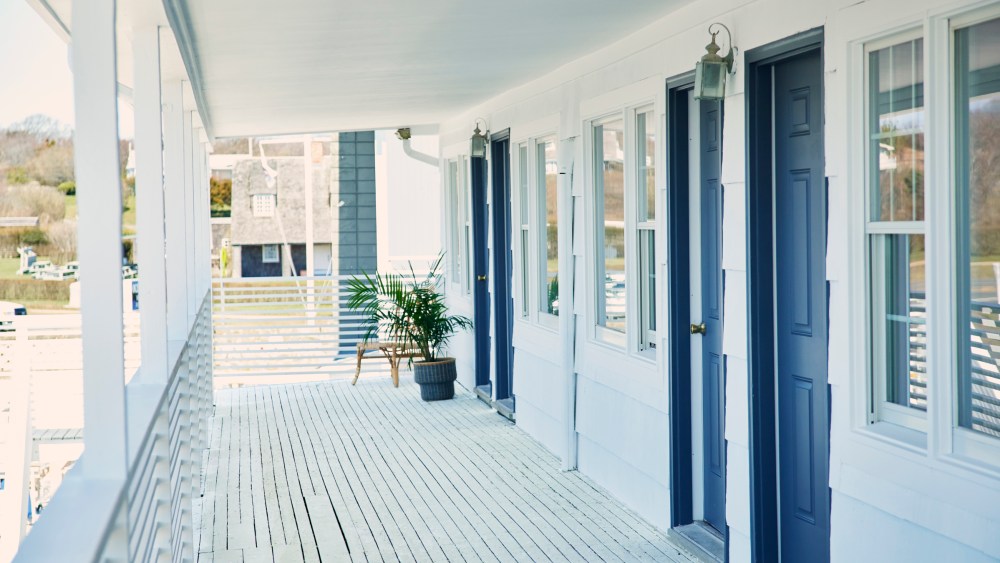 Before Montauk, N.Y., became known for a swell of Wall Street titans and young twentysomethings who spend their weekends at clubby establishments like The Surf Lodge and Sloppy Tuna, the small fisherman’s village was an enclave for well-heeled creative types. In the Twenties, developer Carl Fisher built a yacht club that attracted a WASP-y crowd, including the Astors and Vanderbilts, and in the late Seventies, Andy Warhol imparted his artistic flair to the beach community, inviting Mick Jagger and Lee Radziwill to stay at his waterfront home.

Now, one boutique hotel aims to create a beachside destination that takes guests back to Montauk’s original roots.

“Montauk has always had this incredible lively vibe,” says Jon Krasner, cofounder of Hero Beach Club, which opens June 8, from a corner booth at New York’s Soho House. “Carl Fisher was trying to create the Miami Beach of the north. That was his original vision until the Great Depression happened and Montauk stopped its development. Over the past decade or so, the town has gone from a casual surfer scene to a more international atmosphere.”

Fisher’s dream of transforming Montauk into a family vacation spot may finally be realized with the opening of Hero Beach Club, a 31-room hotel that promotes healthy living and relaxation through activities, such as surfing and hiking, and amenities, which include a public garden and pool, spread with hammocks and cabanas.

“People who come out here for a vacation just want to relax,” says Krasner’s partner Ted Wasserman. “If you want to go surfing, we have access to the best instructors on the beach. If you would like to horseback ride, bike or fish, we can connect you to those experiences. But if you are looking for a real rowdy party, there are other spots in Montauk for that kind of setting.”

Apart from Hero Beach Club’s family-friendly services, the design of the Fifties structure truly adds to its tranquility. Designers Anna Cappelen and Chloe Pollack-Robbins of the studio Curious Yellow elevated the space with modern fixtures and furnishings that were mostly handcrafted in Bali, adding teak lounge chairs outdoors and custom teak beds in the soundproofed bedrooms that are outfitted with Nell Diamond’s — Wasserman’s wife — Hill House Home Supima cotton linens.

“You’re not going to be able to come into one of these spaces and recognize a piece of furniture from Restoration Hardware,” Pollack-Robbins says. “It’s unique to Bali and our Scandinavian aesthetic.”

The design duo’s recent trip to Ibiza also played a role in shaping the hotel’s laid-back aesthetic. “There are big day beds everywhere, where people are just hanging out and relaxing poolside. Kids are up late with their parents, everyone has huge dinners on these long farm tables, and you just eat and drink all day,” Cappelen says.

But Pollack-Robbins is quick to point out that Europeans don’t treat day drinking the same way we do in the States. “It’s a very comfortable, family-oriented party atmosphere.”

In addition to soaking up the sun behind the hotel’s windswept, land-preserved dunes, guests can satisfy their nostalgia for Warhol’s Seventies Montauk by spending time in the lobby that doubles as an art showcase. New York-based art advisory Fiore Brown Art Group chose a mix of contemporary objects, sculptures and photography — largely inspired by Montauk’s culture — from local and international artists alike, including eccentric sculptural vases by Italian artist Gaetano Pesce.

“Montauk has an incredible local art scene, but we felt like they needed more of a platform to gain access to the community and beyond,” Krasner says.

Montauk’s true beauty is found in the sand and water, and Hero Beach Club has an ideal perch on Umbrella Beach, where Krasner and Wasserman intend to have guests and artists intermingle through bonfires and barbecues. “We want to be a gateway to Montauk and all it has to offer,” Wasserman says. “We are putting new packaging on something that has always been there.”